There’s nothing quite like the feeling of taking your first steps onto a college campus, breathing in the energy of student life on the varying paths between academic buildings and residence halls. You feel as if you made it, and you envision wearing the college sweatshirt, sitting in a crowded stadium at the homecoming game, and ordering late-night pizza from the local dive.

That feeling is pretty tough to capture on a YouTube video or Zoom tour. Google Maps with a voice-over explaining a college campus’ features just doesn’t quite resonate the same way. But virtual visits are how high school students are touring campuses during the pandemic.

“Seeing colleges is such an integral part of the search process,” says Pablo Pineda, a senior at Lake Ridge Academy in North Ridgeville. “Figuring out where you want to go, and not being able to physically be on campus, it’s hard to get a feel with pictures on a TV or computer screen.”

Nearly every aspect of the college preparatory process has been altered by COVID-19. Schools have transitioned from requiring ACT and SAT scores to becoming test-optional, or even test-blind. Since testing sites have been closed for some time, not every student has been able to access a safe place to take these exams. This is a real pandemic silver lining if you ask Moira O’Riordan, director of college counseling at St. Edward High School in Lakewood.

“Maybe colleges that were so tied to test scores are now going to realize that they can admit the same caliber of student and the same talent without that test score,” she says.

High school juniors and seniors, along with their families who are supporting the college prep journey, have had to be flexible and open to change. Charley Fuller, principal of Lake Catholic High School in Mentor, emphasizes that forging ahead with the college search in spite of COVID-19 is key to the success of prospective students.

“We’re talking with our students to make sure they are still applying, and our message is to not let the doors of opportunity close,” he says. “I was a little worried that some wouldn’t be thinking about their next steps in education, and I was surprised to see we are right on pace and even ahead in a traditional year with our kids applying to college.” 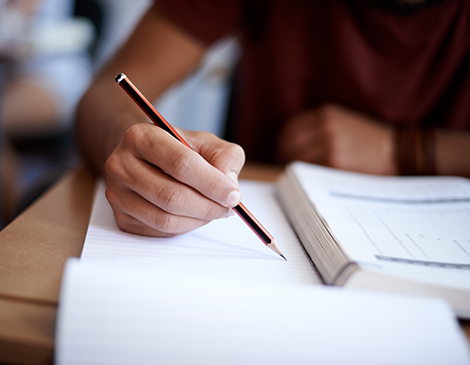 To test or not to test? That was the question for many students during the last year. Pineda, who took the ACT once before the pandemic, has only been able to retake the test once since it’s been canceled five times.

“Many of my friends haven’t been able to take it,” he says.

Although some testing sites reopened safely with COVID-19 protocols in place, some colleges made the move from requiring standardized test scores on college admissions applications to allowing students the choice to not submit their scores. Along with a range of liberal arts colleges and state universities, Ivy League schools such as Harvard University, Yale University and Brown University also became test-optional during the pandemic.

“Colleges were very clear that test-optional means test-optional, and it will not be held against you in the admissions process,” says Rhett Rybarczyk, director of college counseling at Lake Ridge Academy.

Rybarczyk advised students to submit their scores if they were comfortable and if they scored in the middle 50 percentile of students historically accepted to the schools where they were applying. Pineda felt that including his ACT score with college applications wouldn’t be a disadvantage. Overall, the test-optional opportunity has been a relief for students during a stressful, uncertain time.

“For students who have test anxiety, this is a chance for them to put their best foot forward without having to worry so much about the test,” says Fuller.

This means colleges are relying on GPAs, transcripts, essays and recommendation letters. However, in competitive schools where students’ GPAs can exceed 4.0 because of weighted Advanced Placement courses, the test helps level the playing field, Fuller says.

“GPA can differ from school to school, so I do think the test is very important,” he says. For example, a student attending a rigorous high school could have a lower GPA but score higher on a standardized test than a student in a less challenging environment.

Whether testing requirements will resume after the pandemic depends. For some time, the advocacy group FairTest has pushed for fair, unbiased and open evaluation of students through testing. The group launched a campaign, the National Call to Suspend High-Stakes Testing, this year.

“Test-optional does take a tremendous amount of pressure off students,” O’Riordan says. “If you are applying to a highly selective school, your good 28 ACT score might not be good enough,” she says, adding that there are financial inequities at play, too.

Well-resourced students who can afford private tutors and expensive test prep courses can get an edge over students without this access. Students can take the test as many times as they wish, but it’s not free. O’Riordan notes a student who took the ACT seven times over the course of a year and a half. His score increased by nine points, but the pressure to accomplish this was great. By making tests optional, higher education is made more accessible.

For Adam Mocho, 16, a junior at St. Edward, he would rather be prepared.

“I’m planning on taking the ACT and SAT as part of the college process, that way if it’s needed by the time I get to making a decision, it’s not, ‘Why don’t you have this?’ ” he says. 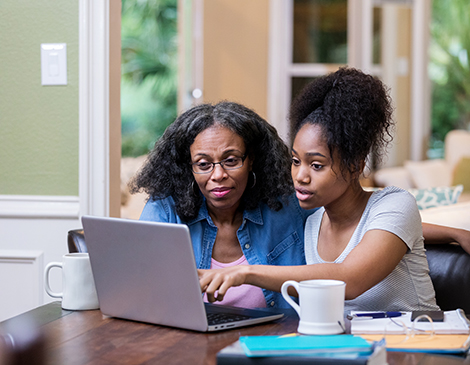 Even if high schoolers could take a formal campus tour during the pandemic, they wouldn’t necessarily experience the essence of university life. Most buildings would be empty while college students participated in e-learning from their dorm rooms. There would be limited extracurricular activities and campus hangouts with CDC protocols in place so that there would be a lack of usual spirit you’d normally experience.

To fill the tour gap, higher-ed institutions rolled out virtual tours — some of them allowing students to zoom in on points of interest or attend a live session with a guide.

“The biggest challenge I’ve seen is the disappointment of not being able to physically see campuses,” Rybarczyk says. “That is such a selling point for families and students.”

“I have been impressed with how creative colleges have been,” he says.

Some colleges that were holding classes in-person allowed prospective students to be a fly on the wall with video access to ongoing college classes.

“There was increased engagement with opening up classrooms, and I do feel like this opens even more doors for when things get back to normal,” Rybarczyk says, noting that now colleges have built their virtual tours, families benefit from the flexibility.

In fact, this was a huge advantage for some students, particularly those who were considering colleges far away from home. The ability to tour universities in a virtual setting makes touring even the biggest dream colleges a reality.

On the flip side, college representatives have not been traveling to high schools to present to students, but instead, they’ve relied on virtual meetings, ushering in more representatives from different geographies, says Rybarczyk.

“We were able to engage with some colleges for the first time,” he says, pointing to Pitzer College in California and the University of Chicago. “We had more than 60 schools still have a point of engagement, and that was very important for our students.”

Hope is On the Way

With the availability of a COVID-19 vaccine and ongoing health and safety protocols, schools are optimistic that there will be an eventual return to normal college routines.

“Keep the faith,” Fuller says. “Things are going to get better, and since we are not seeing the spread in schools, we are getting back to the business of school. That is important for kids to remember. They are still going to have all of the opportunities that the generations before them had. Don’t lose sight of the future.”

Day by day — that’s how students and families should continue approaching the college prep process. Use the tech tools available to make connections to career opportunities and colleges that offer programs of interest.

“Students do need to do career exploration, even if they have to do it by networking through Zoom or Google Meet,” Fuller says.

The application and admissions process has been tough on colleges, too. Rybarczyk thinks this is important for high schoolers and their parents to remember. That’s why he recently invited some local college directors of admission to a Junior Night.

“I want them to understand colleges are supportive and being as flexible as possible, and that will help put things into perspective,” he says.

Like everything during the pandemic, there’s a new normal to prepare for college. But O’Riordan and others feel like there are not only silver linings to some changes, but we will get back to a place where we celebrate graduation with friends and family unmasked.

“This isn’t going to be forever,” she says. “Maybe years from now, they’ll tell their children about the ‘great pandemic.’ ”

Now Trending: How Northeast Ohio Schools Are Embracing TikTok As A Learning Tool

From clubs to student-run marketing videos, area schools such as Lake Catholic and Magnificat are embracing the magic of the For You page.

While hybrid learning isn't being used as prevalently as last year, area lesson plans are filled with knowledge gathered from the experience.

It's no secret the private school search process is daunting and draining. Luckily, we're here to help.