Fans of Cleveland Bagel Co. know to head to the Detroit Shoreway shop for a morning pick-me-up — bagels in flavors from rosemary with sea salt to poppy seed. So when local artist James Quarles was asked to paint a mural on one of the store’s blank white walls, he wanted to create something that was energizing while still being comforting. “People go there early in the morning, get their bagel and start the day,” he says. “So I didn’t want the colors to smack them in the face.” He began sketching his design in July and completed his watercolor work in August. The mural features abstract bagel shapes in soothing shades of blue, green, yellow, orange and white. “It makes me feel at peace,” he says. “I wanted it to feel pleasant, to represent that calm feeling in the morning.” 4201 Detroit Ave., Cleveland, 216-600-5652, clebagelco.com


Three other food murals we love: 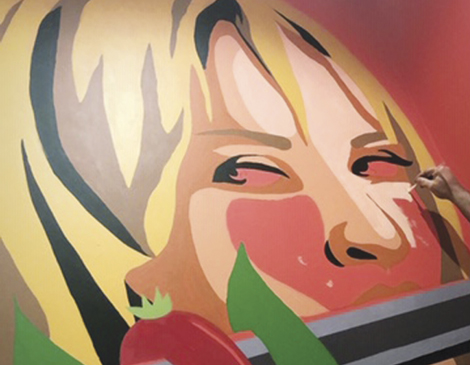 Balance Grille
In artist Glen Infante’s Kill Bill-inspired piece at Balance Grille, Uma Thurman’s character from the film is the focal point, wielding a katana blade skewering red and green vegetables. But in the fusion restaurant’s mural, Infante hid Easter eggs with deeper meaning into his work. Patrons can spot his daughter’s face painted just behind the Cleveland skyline. “She’s wearing pink glasses,” Infante says. “That has to be my favorite part.” 515 Euclid Ave., Cleveland, 216-523-1111, balancegrille.com 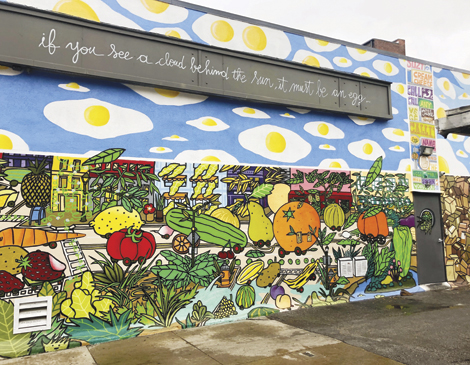 Market Garden Brewery
While visiting from Rouen, France — Cleveland’s sister city — French artist Paatrice Marchand was inspired by exploring the Ohio City neighborhood. He created the mural in just two weeks in July and wanted to include images of fresh produce from the West Side Market, lemons for Market Garden’s Citramax IPA and other homages to the area’s foodie culture. “He loved it here,” says Market Garden Brewery owner Sam McNulty. “He said it reminded him of Paris.” 1947 W. 25th St., Cleveland, 216-621-4000, marketgardenbrewery.com 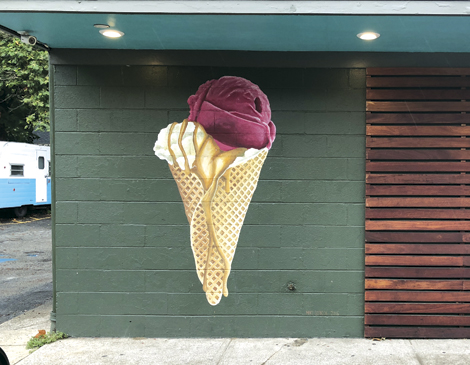 Mason’s Creamery
A regular customer at Mason’s Creamery, Mike Sobeck has his favorite flavor — peanut butter ice cream. But when he painted his ice cream mural on a dark green wall — a task that took him three days to complete — he opted for a brown, ridged waffle cone packed with Mason’s raspberry sorbet and caramel ice cream. “I wanted something that would pop off the green wall,” he says. 4401 Bridge Ave., Cleveland, 216-273-4470, masonscreamery.com