Ron Robinson and his wife Sharon have a knack for turning over a new leaf. When they purchased the 40-year-old family-owned bar on the corner of Caston Road and Main Street in 2014, they saw past its dilapidated exterior, hoping to one day tap into the craft brew scene making waves across Northeast Ohio. For nearly four years, the shot-and-beer bar cultivated only a small following of regulars. But after a $1 million renovation, Robinson reopened last November with a heavy tilt toward exclusive rare bourbons, high-brow ales and industrial chic decor. It’s been smooth sailing ever since. “We sort of operated from a standpoint of common sense,” he says. “If you have good service, great food and a bunch of beers and bourbon, hopefully people will come out, and it worked well for us.” Here are three reasons you should drop anchor here this month. 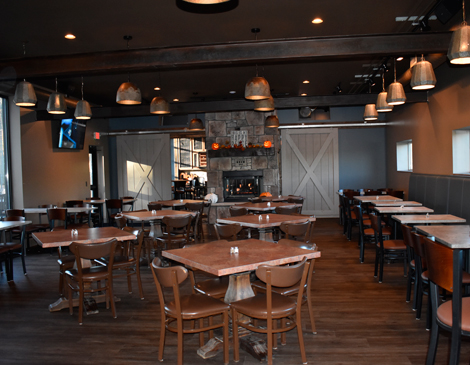 Steel Yard  Robinson doubled down on creating a manufacturer’s paradise by building two outdoor patios with stone and cast-iron fire pits, turning bourbon barrels into tabletops and building a two-sided fireplace. A renovated grain silo serves as an outdoor stage for weekly live music. “We set it up as a gathering place with a little bit of class, and it’s really nice,” says Robinson.

Burning Desire  The bourbon barrel room is where the magic happens. Separated from the restaurant and main bar by two sliding barn doors, this intimate addition entertains up to 40 people with a steel bar top that bartenders often light on fire in a roadhouse-style cocktail trick. But look past the gimmicks into the custom-made liquor cabinets, which hold more than 140 exclusive and rare bourbons, whiskeys and scotches, such as Orphan Barrel’s Forager’s Keep ($70 per shot) and Rhetoric Bourbon ($70 per shot), salvaged from old rickhouses. “Some of the liquor has been in there for 25 years,” says Robinson. “Some of the stuff is so hard to get, I buy it by the barrel.”

Brew Food  Head chef Curtis Myers incorporates some of the 32 craft brews on tap into many of the menu’s dishes. The brew cheese pretzel bites ($10), served with thick cheese dip made with the house ale Reservoir Red, is a perfect setup for the Brew Yard Burger ($11), which has an Angus beef and chorizo patty topped with pepper jack cheese, bacon and chili lime mayo. “People rave over [the brew cheese],” says Robinson. “They buy it to-go.”