From the media to the housing market, nearly every industry is gearing up to feel the burn of the unprecedented economic effects of the coronavirus outbreak. But few have felt the brunt so sharply and so swiftly as the restaurant industry.

Overnight, a $500 billion industry all but disappeared, or at least changed. Restaurants that operated in fine dining have transitioned to delivery, to-go and meal prep services. Already, restaurants have closed and employees are facing unemployment on mass levels. Even more will as the shutdown stretches from days to weeks to more.

But even as our local food favorites face an uncertain future, the restaurant industry has been a shining and inspiring example for stepping up in times of need to take care of not only their own but the community they serve.

But rather than chalk things up to bad timing and getting out, Chef Vinnie Cimino decided to put the fully stocked kitchen and coolers to use and his staff to work.

“We were fortunate enough to have an owner who is allowing us to utilize our space to continue to cook for our out-of-work friends and family,” says Cimino. “We had all this stuff in our coolers, and we just wanted to try to help as many people as we can. The response has been astronomical.” 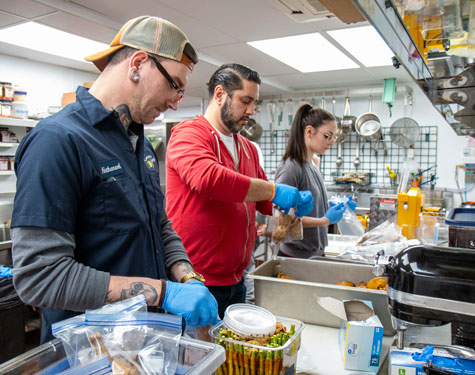 Being as safe and clean as possible, the staff began cooking and handing out curbside bagged lunches for those in the service industry who suddenly found themselves laid off. The food that should have gone to the restaurant’s first customers instead went to struggling musicians, family members and friends in need, who took home bags of lettuce, loaves of bread and anything the restaurant had.

Summer House turned into a food bank overnight. Cimino named the new project Cleveland Family Meal, and in its first week, it fed about 400 families. The restaurant has since closed its doors but is still offering resources and providing families in need with food donations.

“We look at our industry as one big family,” says Cimino. “Everybody knows everybody. We’ve always looked out for everybody in one shape or form, and this is just an extension of that.”

Meanwhile in Tremont, Dante Boccuzzi of Dante has been holding steady with takeout orders. But Boccuzzi says that will barely help him break even.

“With so many options, takeout isn’t going to save anyone,” he says. “So we figured if people aren’t buying it, we might as well give it away.”

Boccuzzi launched his own Family Meal, a name derived from the restaurant industry tradition of eating together before a shift, on Sunday March 22. It handed out pre-packaged Italian dinners of rigatoni, meatballs, salad and garlic bread. Boccuzzi and his staff fed nearly 1,000 people in the first week, and thanks to donations from customers and wholesalers such as Sysco, it will hand out chicken Alfredo and pasta meals today, March 29.

“It brought tears to my eyes the way we sent out a newsletter and instantly there was money coming in from customers and friends,” says Boccuzzi. “God gave us all different talents, and in our life, we’re the cooks. It’s almost our duty to provide food for the people in need.”

Some restaurants simply couldn't affordably transition to takeout, such as restaurateur Brad Friedlander’s Red, The Steakhouse and Rosso Italia. In his case, knowing the hardships his employees would soon face, the restaurant sent its employees home with the food that remained in the restaurant.

“We took the perishable food and split it up among employees,” he says. “I worry about my employees and their livelihoods.” 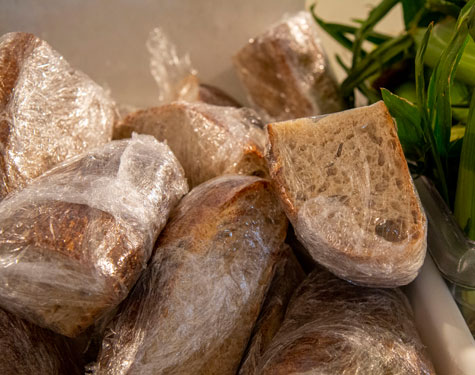 Meanwhile, as it tends to do, Edwin’s Leadership and Restaurant found a unique way to pitch in. The Brandon Chrostowski-led restaurant, which uses its restaurants and butcher shop to train formerly incarcerated individuals and recovering addicts on the food industry and fine dining service, launched virtual educational sessions to help those in the restaurant industry through this unprecedented time. Every day from noon to 2 p.m., a case manager from the organization meets with affected individuals about filing for unemployment, gathering and handling essential documentation and more. (Those wishing to reserve a timeslot may call 216-921-3333 or email info@edwinsrestaurant.org.)

But the generosity has not only been spread within the industry. While CMSD and other statewide school districts have found ways to maintain vital breakfasts and lunches for students, restaurants still understood that families would be on hard times. So, a few restaurants focused their charitable actions outside of the industry.

For example, the Gordon Square poutine spot Banter has handed out free boxed lunches to families in need each Monday from 11 a.m. to 2 p.m. In Cleveland Heights, despite an incident where a vandal threw a brick through the storefront window, Goodfellas BBQ has offered free meals from noon to 3 p.m. every Tuesday through Friday. Meanwhile, Saucy Brew Works has been periodically offering six packs of its craft brew for only a penny for first responders and health care industry workers, including on March 29 from noon to 5 p.m.

Amidst facing its own hardship, Boccuzzi says the way the restaurant industry has stepped up has been inspiring — but not surprising.

“This industry is a human-touch, human-influential business,” says Boccuzzi. “People come in and you're dealing with their emotions and their lives. There's human contact all the time, and I think because of that is why the industry reacts this way. So many people depend on us, from employees to those who make your restaurant their home.”

“As a whole, everybody is scared,” he says. “You can see it. Life’s not going to be the same when this is over, but I think we’ll get through it.”
Share this story:

The bar appeals to younger patrons with its affordable drinks, welcoming environment, live sports and more.

New owner Ron Leonhardt Jr. - a longtime Velvet Tango Room patron - has made it his mission to change as little as possible about the Duck Island bar.

With an expansive menu of over-the-top bar and soul food, the Haunted House Restaurant delivers a cinematic throwback horror experience in the former Melt space.