Shopping for locally sourced goods just got easier on the East Side thanks to Nature’s Oasis’ second location. After opening the original grocery store in Lakewood nearly three years ago, owner Elliott Endsley opened another location in the Van Aken District in June, boasting 5,700 square feet of retail space, an on-site cafe, a full produce department and larger frozen and refrigerated sections than its Lakewood counterpart.

The natural foods store sources most of its products from local food purveyors and sells items from more than 100 Ohio-based companies. “We’re mainly focused on supporting and growing other Ohio-based small businesses,” says Endsley. “When local businesses grow, [Cleveland] will grow as a local economy as well.” Prep your next grocery list with these five local products. 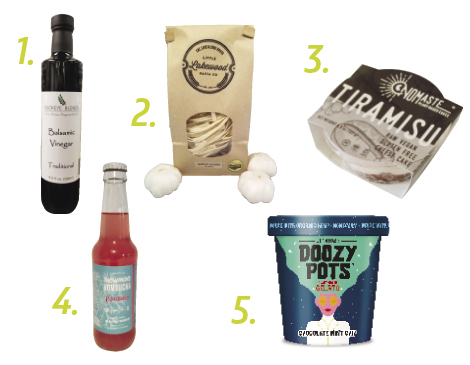 Customers can sample Aurora-based Buckeye Blends’ line of flavored vinegars and olive oils at an eye-catching display in the Van Aken Nature’s Oasis store. The traditional balsamic vinegar is barrel-aged for up to 18 years before being imported from Modena, Italy. “I like to drizzle it over strawberries,” Endsley says. “I use it myself pretty quickly.”

Little Lakewood Pasta Co. makes its fresh and dried pastas two doors down from the Nature’s Oasis store in Lakewood. This version is packed with flavor, so you don’t have to add much additional spice. Nearly all of Little Lakewood’s pasta varieties pair with everything, from summery fruits and grilled fish to heavier winter dishes. “We bring in different ones throughout the year,” says Endsley.

This plant-based cheesecake is raw and vegan, without any gluten, corn, soy or refined sugars — but it’s devilishly sweet. The company’s array of year-round and seasonal flavors make silky, satisfying cheesecake accessible to everyone. “For people that are vegan, particularly, it’s a nice snack to have that meets their dietary restrictions,” Endsley says. “It’s always, ‘I love it. I can’t get enough.’ ”

This fermented tea, handcrafted in small batches in Fairview Park and sold in reusable glass bottles, is subtly sweet and smooth. It also comes in other fruity flavors like pomegranate, hibiscus and raspberry, and is a great option for kombucha first-timers. “A lot of people don’t like the taste of vinegar, but they want the health benefits of kombucha,” Endsley says. “[Snowmon’s] doesn’t taste as vinegar-y, so it’s a little easier to drink.”

Wonderlab’s tempting chocolate mint chip gelato is a vegan twist on the beloved classic, made with hemp, oats and a dash of mint, and studded with dark chocolate chips. The Cleveland-based company has been stunning vegans and non-vegans alike with its luscious gelato flavors since early 2019. “This one is smooth and rich,” Endsley says. “It doesn’t taste like it’s vegan.”