Cleveland's fine-dining community is losing another beloved staple this month.

The Flying Fig is closing its doors at the end of February after 23 years in Cleveland's West 25th Street Market District. The space will undergo a renovation to transition into a new concept set to open in late spring or early summer. Chef Karen Small is partnering with Jill Davis, owner of Gordon Square's Toast, on the new approach.

"I just thought the time was right," says Small. "It's been 23 years, and we haven't done any significant changes in 18 years. Everything needs a fresh look after a while. It's time for something new and exciting in the neighborhood."

When Small opened the Flying Fig in 1998, farm-to-table wasn't the buzz word it is today. The chef would drive to far-flung farms and markets across Ohio to source simple seasonal ingredients like beans, greens, mushrooms and meat. A slow-burn of quality and consistency built the Flying Fig into one of the city's most important dining experiences, named one of the city's best restaurants time and time again. Finally in 2018, the James Beard Foundation named Small a finalist for Best Chef in the Great Lakes region. 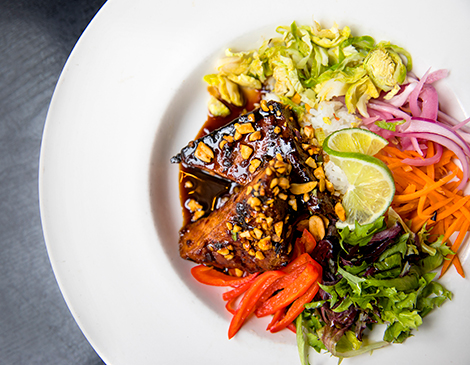 "I hope our legacy will be that we've always been true to who we are," says Small. "We've never gone with the newest fad. We've just stayed true to our mission of providing excellent food from excellent producers and supporting the local economy and our goals of sustainability."

Small says the closure is not entirely pandemic-related, though the time of reflection did help her conceptualize the future.

"We've been crazy busy," she says. "I'm not closing because we're slow. People are back out, and they're going to continue to do fine dining."

Though slower to empire-build like her acclaimed peers, in recent years, Small has begun branching out. Flying Fig has a stall in Rocket Mortgage FieldHouse, which Small says will remain open for at least the rest of this season and hopefully in some form next season. Small is also set to open a breakfast concept called Juneberry Table at 3900 Lorain Ave. this spring.

Small did not share many details about the concept set to replace the Fig but says it will likely be more casual and tap into diners' desire to share a communal dining experience. More details will be shared in March, the owners say.

Still, diners can expect Small's dedication to local, seasonal and fresh ingredients to continue to shine.

"There's always going to be some element of bittersweet after 23 years, but I'm looking forward," she says. "We've had a great run, and I just couldn't be happier."