Deep-fry
Deep-frying a turkey has two main advantages, explains Nolan Konkoski, chef and owner at Soho Chicken & Whiskey. “It cooks incredibly quickly, in a half-hour instead of all day,” he says. “It’s such a high heat you get beautiful crispy skin on the outside, without drying out all the meat.” The key, he says, is to brine the bird before frying it. “Brining works wonders. The meat stays juicy, and the brine packs so much flavor in it.” Deep-frying can be dangerous if not done correctly. He recommends a dry run in order to prevent catastrophic hot oil splashes and boil-overs. “You have to have a lot of oil in a pot that looks way too big. Do the whole thing with cold water first — drop the bird in and make sure the level rises only three-quarters full. That’s how much oil you’ll need.”

Grilled
You know how deliciously smoky and crispy a chicken wing can be? Imagine that, large-scale. The trick is to make the unpredictable heat of a grill work for you, not against you. “When you grill a turkey, you’re dealing with direct heat,” explains Salt chef and co-owner Jill Vedaa. “So the smaller you can get the pieces the better.” Grill the bird at a lower temperature and for a long time, in order to cook the meat through without burning the skin. In fact, Vedaa recommends increasing the heat at the end to get it crispy. Cook to an internal temperature of 165 rather than sticking to a timer. She also suggests brining before grilling to seal in flavor and juices. And definitely marinate. “Most things you put on the grill should be marinated, which helps it not stick to the grill,” Vedaa says.

Smoked
“A smoked turkey is going to have not just that smoky flavor but a nice, thick smoke ring when it’s cut into,” says Andrew Mansour, catering chef at Fire Food & Drink. Brine the bird first, he recommends. Spatchcock the turkey, then smoke in a covered grill for up to four-and-a-half hours. “[The brine] imparts a salty flavor throughout and gives the edges a little char.” Mansour suggests serving smoked turkey with an acidic sauce or side, like a chimichurri. “I like chimichurri with smoked birds, due to the way the acid and herbs contrast with the big, bold, heavy, sit-on-your-tongue flavors of the meat. [The chimichurri] resets the tongue with acid and herbs so you’re ready for the next bite.”

Spatchcock
This technique involves splitting open or butterflying the turkey to increase the surface area that touches the grill. The results lead to crispier skin and dramatically reduces cooking time. Use a pair of heavy-duty cooking shears to cut out the spine. “Be careful to leave the oyster intact,” says Mansour, “That’s the silver-dollar-sized piece of meat where the hip and spine meet.” Use a chef’s knife to score along the exposed breastbone. Break the ribs apart and pull the breastbone out. Let the spatchcocked bird rest for a couple hours in the fridge, uncovered. “You want to develop some dryness on the skin [before you cook it],” says Mansour.

Traditional
Here’s just the kind of tip we love: a super-easy shortcut that’s chef approved. Vedaa’s favorite way to make a traditional Thanksgiving turkey involves a humble and cheap item you can find a your local grocery store: a roasting bag. “Those things are amazing,” she says. “The turkey will be perfect. I’m such a naysayer about these things — I think something that I come up with is going to be better, but no. That’s not true. Put your turkey in the baste-in-bag, cook according to weight, and do not touch it, don’t baste and don’t worry about it. You’ll end up with moist meat and a crispy outside, too. These things are amazing.”


Add some kick to your bird with this blend: 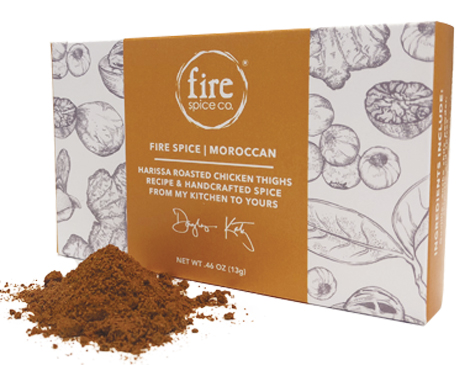 Whatever method you choose for cooking your turkey, consider adding some extra spice from a hometown-favorite mix. Fire Spice Co.’s Moroccan blend ($9) is a great way to punch up your poultry this Thanksgiving thanks to the combination of chiles in this North African staple. For a turkey, owner Douglas Katz recommends using two packets, one in a dry rub and one for cooking the accompanying vegetables. “All the different dried chiles add smokiness and overall spice,” says Katz. He suggests pureeing the veggies after they’re cooked and using it in place of gravy. “I would put the sauce on a serving platter, then slice the turkey and serve it on top, with extra on the side. It’s got a harissa barbecue texture and is tangy with a nice spice.” firespicecompany.com