John Petrenchik and Virginia Poirier, who live at Judson’s South Franklin Circle in Chagrin Falls, have never been the type to just sit on the bench.

“Both of us have been into diet and exercise for a good part of our adult lives,” Poirier says, sharing that both her and Petrenchik love doing water aerobics for the workout — and the social time.

“We go diligently three times a week, first thing in the morning,” Poirier says. “There are easily 20 to 30 people in the class, and you get to know everyone.”

Aging actively is a focus for these two, especially since Petrenchik had a stroke several years ago and quadruple bypass surgery in 1995.

Since then, he has committed to a plant-based diet and regular exercise.

“Before, exercise was focused on goals — like, you want to get stronger so you can ski better,” Petrenchik, 88, says. “Now, it’s just knowing that I’ll be better. Everything I do, whether I see a gain one week or not, I know it is going to keep me in better shape a year from now.”

“We are more into exercise maintenance these days,” Poirier, 77, adds.

The outlook is shared by others who choose to live at South Franklin Circle. And, the couple is wise to keep moving. According to a Centers for Disease Control and Prevention’s report “Physical Activity and Health,” by age 75 about one in three men and one in two women engage in no physical
activity.

“It is proven that exercise helps keep you sharp, and it keeps you engaged,” says Kevin O’Connor, an exercise specialist at the retirement facility, who has worked with Petrenchik. “At this age, you’re going to encounter setbacks, whether it be illness or injury, and exercise is a way of preparing yourself so if you do confront those issues, you have an avenue to get back to your old self and back to wellness.”

During a weekly core training class, the couple focuses on exercises to improve strength and balance. A recent addition to their active schedule is tai chi. O’Connor also teaches the water aerobics class that Petrenchik and Poirier enjoy.

“There is a diverse level of aptitude in the group — some have restrictions related to balance or because of a surgery, or this or that,” Poirier says. “The instructor is great with every single person, so no one feels as if they are showing up at the wrong class!”

O’Connor notes that for adults who have enjoyed active hobbies for years — sailing, skiing, cycling — there needs to be some replacement for those more strenuous pastimes so they can stay fit.

“Whether you were involved in team sports like golf or played tennis, you don’t have to do the exact same things as before, but you don’t want to drop off to nothing,” he says. “Besides, those who have been active appreciate it because they are used to that feeling they get after they exercise — and the sense of accomplishment.”

Retirement is supposed to be a period where you have the time to do the things you want and enjoying life. When you arrive at a museum or a park, you want to have the energy to walk the grounds. O’Connor says the fitness options provided by South Franklin Circle are key to making that possible.

“You want to go out and enjoy life as much as you can,” he says.

And that’s exactly what Petrenchik and Poirier are doing.

“We miss it when we don’t get our morning exercise,” Poirier says.

Petrenchik offers simplified advice for anyone who thinks staying active in retirement doesn’t make a difference. 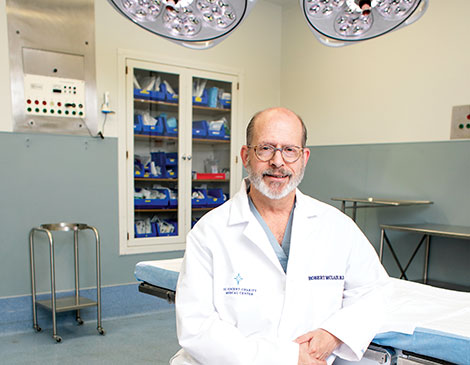 Akron firefighter and paramedic Steve Arce was taking 3,200 milligrams of ibuprofen daily to manage extreme lower back pain, but this triggered stomach ulcers. “I felt like I was my grandpa,” he quips, sharing how he’d wake up an hour earlier just to get moving in the morning.

But it was pain that the 38-year-old worked through, no matter what. “I just kept going,” says Arce.

What began as lingering back pain a few years ago compounded.

Eventually, a disc in his lower spine had deteriorated completely and his lower vertebrae were fusing together.

“I played this cat-and-mouse game where I’d work a 24-hour shift, I’d be in pain, then I’d be off for 48 hours,” Arce says. “I’d come home and do nothing the next day, and by the second day I was a little better. I tried to be in the gym to strength train, but it hurt really bad.”

The pain got so bad that after lifting weights one day, he made an appointment. “After an MRI, the doctor said, ‘I can’t send you back to work,’ ” Arce recalls.

This crushed him. He petitioned for light duty and was scheduled in the office, a major downshift from racing to fires and working in the trenches of medical emergency.

In the meantime, Arce considered surgery options. Nearly 80% of American adults experience lower back pain at some point, according to the National Institute of Neurological Disorders and Stroke. Most recover with nonsurgical treatments. Arce was not in that camp.

He knew other firefighters who had gone through spinal fusion surgery, which permanently joins two vertebrae, fusing the spine into alignment. But that can limit range of motion.

Because he wanted to be able to pursue an active lifestlye, Arce looked into an alternative: lumbar disk replacement, which substitutes a worn or degenerated disk with an artificial disk. It alleviates lower back pain while allowing for normal range of motion.

Arce consulted with Dr. Robert McLain, a spine surgeon at St. Vincent Charity Medical Center, who was one of the principal investigators in early FDA trials for the procedure.

“Steve was a really good candidate for lumbar disc replacement because he is a young, fit, healthy man who might have been impaired by the stiffness of a spinal fusion,” McLain says. “He was still mobile yet had bad back and disc-related pain.”

That pain felt like a “direct pinch” in the tailbone that ran down Arce’s left leg, often all the way to his ankle. “I’d go numb and my leg would give out,” he describes.

“Plenty of times, I’d be carrying a patient out of a house and we’d get over to the cot, and I’d drop to my knees and feel like I was seeing red,” Arce says. “I wanted to vomit the pain was so bad, and it came from certain movements I could not predict. Especially with this job, you’re never doing anything in a normal, orderly fashion. It’s, ‘Let’s figure out how to do this and get it done.’ ”

In patients who qualify for the surgery, they can achieve full range of motion and sustain vigorous athletic and work activity following the procedure compared to fusion patients, who often must wear a brace for six to 12 weeks before they can bend over as they wait for the fusion to occur, and many will not return to work for up to three months post-surgery.

“You can get back to activity faster [with lumbar disk replacement], and limitations are less since you don’t need to wait,” McLain explains.

If disc replacement is an option, McLain encourages patients to consider it, saying it’s worth getting a second opinion to learn whether the procedure is a solution for back pain.

For Arce, after a few days in the hospital for surgery, he returned home and began working with a physical therapist immediately. He stayed on light-duty at work for six months, then returned to the field. He runs at least three miles every other day, and focuses on strength training and balance exercise.

Gail Pittman wanted to end her mother Marie Davis’ debilitating cycle of landing in the emergency room, being admitted to the hospital and then on to a nursing home, something that many older adults can relate to.

Data from the National Hospital Ambulatory Medical Care Survey revealed that 511 out of 1,000 adults age 65 and older visited an emergency department in the span of one year.

Pittman’s 92-year-old mother suffered from tuberculosis as a child, and the illness scarred her corneas and caused lung damage.

Over the years, and despite these setbacks, Davis had maintained her health. But infections have always spread easily in her body, and several years ago she began getting chronic urinary tract infections. Side effects in the older population can include poor motor skills, dizziness and confusion.

“Mom was dragging her foot,” Pittman says. “I didn’t realize she was exhibiting extreme weakness and that is a symptom. The doctor wanted to rule out a stroke.”

Davis also went to the emergency room for gallbladder issues, but doctors hesitated to treat her immediately because of her heart, lung and other medical issues related to her case of tuberculous as a child. 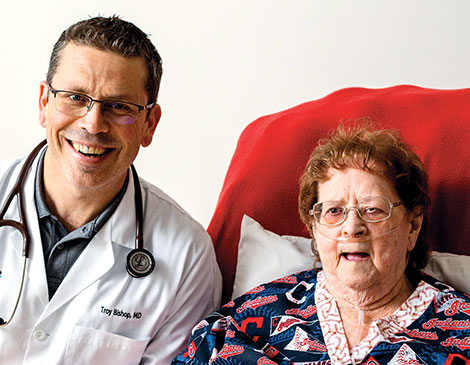 “It’s a miracle she made it through,” says Pittman. The surgery was delayed while waiting for a cardiologist causing her mother to get sepsis, which can lead to malfunctioning organs and even death. She spent 26 hours in the post-anesthesia care unit under constant care.

“After each hospital visit, she ended up in a nursing home,” Pittman shares, stating that Davis, who lives with her, could not thrive in that environment.

She knew there had to be a better way for her mother to live.

The goal of the program is to increase patients’ access to physicians, nurses and testing supplies, and to help facilitate home therapies to reduce hospitalization. A physician or nurse practitioner makes home visits, if necessary.

Caregivers and patients are given education and tools to monitor vitals, and to identify and treat common issues like chronic obstructive pulmonary disease urinary tract infections.

“We identify high-risk patients and visit them in their home environment several times a year,” Bishop says, adding that there is a specific hotline so patients and caregivers can directly access the team.

“We treat mom’s infections in a more proactive manner by doing tests three times a week and looking out for other signs and symptoms,” Pittman says. “If tests are positive, we can treat here, and this has kept her from getting more serious infections and kept her out of the hospital.”

A handful of times, Davis came down with lung infections and was treated at home by
Bishop.

“This has made a huge difference in her quality of life,” says Pittman, who maintains a log of her mother’s medications and daily vital signs, such as blood pressure.

If Pittman sees any changes in Davis’ health, she writes it down and also monitors her mom’s diet with a careful eye on sodium intake.

“If I have any questions, I call the high-risk line and we talk frequently,” Pittman adds.

Davis says this personalized care has made all the difference for her, and she’s happy to be rid of the emergency room, hospital bed, nursing home cycle.

“Dr. Bishop has come here to the house and checked on me, and he keeps me out of the hospital,” she says. “I can’t find the words — he is just really great.”

Pittman notes that sometimes perseverance is all it takes.

“You have to be an advocate and keep searching for the right health care team to help you through,” she says.