No matter our age or stage of life, finding the ideal delicious-but-healthy diet our bodies crave to stay in tip-top shape is a goal for which we all strive. From losing weight to combating disease, four patients from northeast Ohio’s leading hospitals share their stories of struggles and successes. Meanwhile, the medical professionals who are helping them achieve their goals offer healthy doses of advice we all can use.

Playing With Food
These days, 4-year-old Paris Carter is an endless bundle of energy. But two years ago, she showed little interest in eating. She drank sugary juices and whole milk and enjoyed scrambled eggs, oatmeal, organic vegetables and waffles. Everything else was a struggle. She was underweight, and her mothers, Rosalee King and Lorraine Lofton, were concerned.

The Cleveland couple sought advice from MetroHealth pediatric dietitian Emily Iammarino, who taught them novel ways to peak their daughter’s interest in new foods to ensure she gets enough calories.

“Paris has no medical issues,” Iammarino says. “She’s a very active child who just didn’t want to sit down and eat. That’s very common behavior for children of that age. Our goal is to use food as medicine to meet whatever nutritional needs children have.”

The dietitian also advised adhering to a mealtime ritual. “Studies indicate that children who aren’t super interested in eating will watch their parents and model that behavior,” she says. “It’s easier to eat when everyone around you is eating.”

The plan Iammarino designed included offering Paris yogurt and cheese as snacks. The moms began adding milk instead of water to her favorite oatmeal and incorporated new fruits and vegetables into her diet. No longer underweight, the youngster is almost 40 inches tall and weighs 31 pounds.

“I struggled with my eating habits most of my life and was overweight as a teenager,” King says. “A few years ago, I started my journey to healthy eating, and I want that for my family, too. Paris’ eating habits are very good now, and I’m very excited for her.” 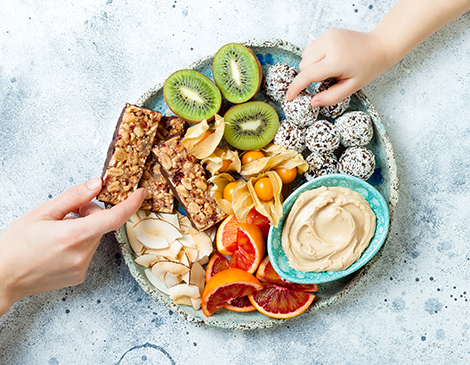 Kitchen Wizardry
When Kristi Little was a performance artist in Manhattan, staying in shape was no sweat. But in 2008, when she returned to her native Ohio and settled in Cleveland Heights, weight gain followed.

“I danced and did yoga in New York, and I walked everywhere, sometimes 10 miles a day, ” Little, 45, says. “But adjusting to a new environment was very stressful. Reading Harry Potter and eating pints of ice cream became a ritual.”

That pattern became a habit, and Little realized that the 50 pounds she’d added to her 5-foot-4-inch frame affected her flexibility.

“I was exhausted and could no longer do yoga,” she says. “That caused more stress and led me to eat even more.”

Throughout the decade that followed, Little struggled to keep her weight down, constantly worrying about being diagnosed with the diabetes and high blood pressure that run in her family.

In 2018, she learned about Cleveland Clinic’s Culinary Medicine program. Developed by a team of physicians, dietitians and chefs, it combines the evidence-based science of food, nutrition and medicine with the joy of cooking. Little signed up for the six-week course she describes as “life-changing.”

“During the first class, we learned how choosing healthy whole foods actually heals and maintains your body in its optimal state. That really spoke to me,” she says. “The facts are in front of you, and you can’t deny them. I got to the point where I wanted to choose foods to help me live.”

“Mastering culinary skills is great for everyone,” says Dr. Irina Todorov, medical director of the Center for Integrative & Lifestyle Medicine. “When we cook at home and eat at home, we’re more likely to eat the minimally processed food that’s correlated with longevity.”

Little credits the program with giving her the tools to lose weight.

Growing up, the fear of food loomed large in Sarah Vargo’s life. Almost everything she ate caused diarrhea and cramping, and she had a hard time gaining weight. Symptoms increased during her freshman year of college when Vargo began passing copious amounts of blood, and the weight on her 5-foot-2-inch frame hovered in the 80-pound range. She scheduled a colonoscopy, and was diagnosed with Crohn’s disease, an inflammatory bowel disorder (IBD) that causes inflammation of the digestive tract and often leads to abdominal pain, severe diarrhea, weight loss and malnutrition.

“I tried protein powders in an attempt to gain weight and added foods that were high in calories,” the 32-year-old respiratory therapist recalls. “No matter what I did, I couldn’t get my diet on track.”

“Sarah’s body mass index was 15.5, which was really underweight,” Butscher says. “Many patients who need to gain weight gravitate toward highly processed foods which, in Sarah’s case, caused bloating and led her to skip meals. That can be a difficult cycle to break.”

Butscher created a 1,500- to 2,000-calories-a-day plan that would allay Crohn’s symptoms and lead to weight gain. It includes clean, plant-based Orgain protein shakes, grab-and-go granola bars and meals centering on salmon and chicken cooked in high-calorie oil. Vargo also added to her diet refined grains, such as oatmeal, hummus and lactose-free almond milk, as well as fruits and vegetables low in fiber.

In September 2021, Vargo gave birth to daughter Cali. Since the new mom is breastfeeding, her weight fluctuates between 80 and 96 pounds. With Butscher’s help, she’s added an extra 500 calories to her diet each day to compensate.

“It took some trial and error to find a plan that worked for me,” she says. “But when I did, I no longer felt like garbage after I ate. That’s a wonderful way to live.”

Get more nutrition tips and tricks from Cleveland experts and doctors.

A Guide to Superfoods, Nutrition and Gut Health from Cleveland's Best Doctors

Local experts share their tips for maximizing nutrition at home and on the go. Plus, our guide to the area's best medical professionals.

These three recipes are full of superfoods and offer both great taste and great nutrition.

CLE Best Docs: What to Know About Food Intolerances

Experts from Cleveland Clinic, Metrohealth and University Hospitals share what to watch for when the food you eat causes a harsh reaction.