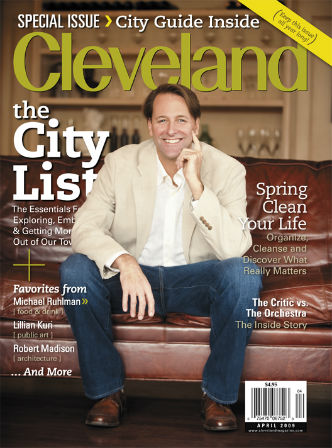 Our antiquated government sets us up to fail. Serious reform can strengthen Cleveland and make our leaders accountable again.

It’s not easy growing up in Ohio City’s shadow. But head northwest from Market Square and you’ll run into the Detroit Shoreway neighborhood’s Gordon Square, an up-and-coming district that is quickly evolving into an arts haven.

BASE jumping — parachuting off a building, antenna, span or earth — is among the world’s riskiest sports. It is five to eight times more likely to result in injury or death than skydiving. Chris has jumped off several downtown Cleveland buildings. (Chris’ last name is omitted because BASE jumping is illegal.)

It’s just a block north of Shaker Square, but it’s easy to overlook the Larchmere district. You really shouldn’t. Antiques and art are the draw here, from lovingly cared-for furniture to intricate, handwoven rugs to century-old paintings

Frustrated by her wastefulness and determined to change, the author begins aone-month spending moratorium.

There’s a reason Tremont’s most famous establishments are just that. But the next time you visit, take some time to explore the side of the neighborhood its natives know best

The Rock and Roll Hall of Fame and Museum presents the first major exhibit examining Bruce Springsteen’s four-decade music career and his ascent from the Jersey shore to worldwide fame.

Plain Dealer music writer Donald Rosenberg covered the Cleveland Orchestra for 28 years. That is, until his critiques of Franz Welser-Möst apparently unseated him from the prestigious role. What happened along the way gives a rare look at two

Nights at the Museum

Living at the epicenter of the city’s cultural hub in one of its landmark homes is a history buff’s dream. For Chad Malkamaki, it’s also a way of life.

How one family learned to value what they have by nearly losing everything.

See how three homeowners built comfort, luxury and privacy by adopting the great outdoors as an al fresco living space.

Sure, a straw-bale house is energy efficient and eco-friendly, but Gus and Jan Kious' decision to build one in Cleveland Heights had as much to do with how the home's unusual design fit the flow of their lives.

When building a new home, consider planning for upgrades that can enhance value and appeal.

Locks From a Box?

Tap Studios’ workshop gives couples an opportunity to create their own wedding bands.

It's a Mother's Day

See the transformations of three always-on-the-go moms, winners of Cleveland Magazine’s reader-makeover contest, as they receive a day of pampering that includes everything from cut and color to makeup.