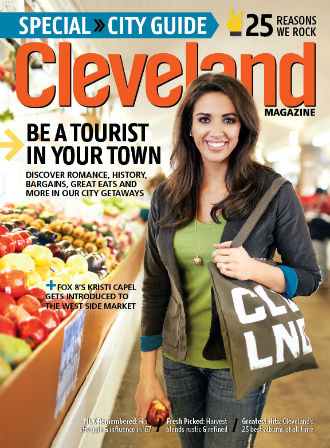 Trevor Clatterbuck's Fresh Fork Market is ready to more than double its reach this summer.

Just in case you needed a reason to drink Polish beer on a Monday: DJ Kishka once again brings Dyngus Day to Gordon Square April 9.

Hello CLE: Explore Your Child Side

Don't leave the kids at home. Cleveland has plenty of activities for a family-friendly getaway.

A stroll through Little Italy and University Circle leads to romance in unexpected places.

Cleveland's reputation as a dining destination is more evident now than ever. We're happy to be along for the ride.

Discover Cleveland's past with a trip to some of the city's most historic places.

Cleveland's alter ego as Superman's birthplace is hiding in plain sight. It's time to build a superhero museum and embrace our dork side.

In April 1967, Dr. Martin Luther King Jr. launched a drive in Cleveland to prevent another riot in Hough and help elect the city's first black mayor. His aides and local leaders recall the struggles and tensions 45 years ago.

The newly opened Rock and Roll Hall of Fame and Museum Library and Archives gives fans and scholars a front-row seat to music history.

Our live music venues have lives of their own. Here are eight of our favorites.

25 Reasons We Rock: For The Record

The legends tell their tales here every day of the week.

The city is home to one of the last American record-pressing plants and a label that releases new music on cassette tape. We're not stuck in the past. It's just that the past sounded so good.

Food and music collide in Cleveland. Just ask these four chefs, for whom playing music is more than a side dish.

25 Reasons We Rock: Who's Next

The Great American Cereal Book digs in to the history of our breakfast staple.

The newest exhibit at the Rock Hall looks inside the Grateful Dead on tour.

Hudson's ar2 wants you to be confident in your clothes. Owner Amy Cook will make sure you are.