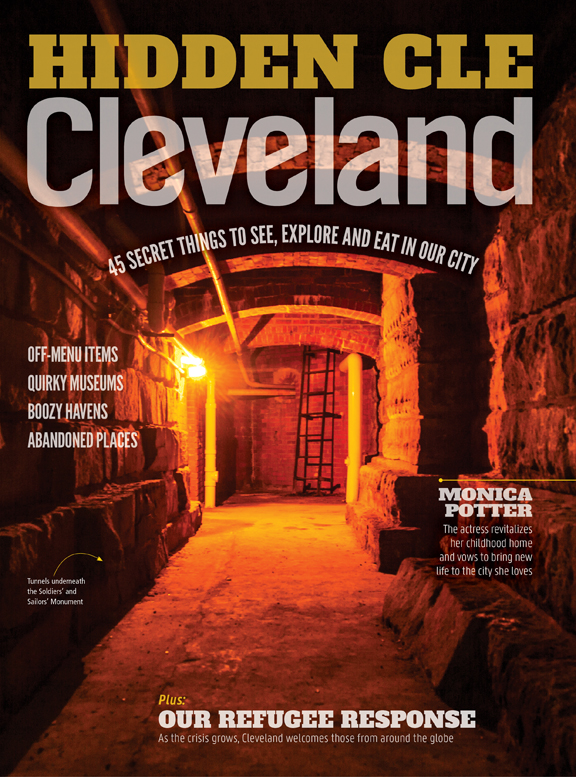 Cleveland had a winning season in 2016. Here are some of the local champions who continue to help the business, nonprofit, education and other communities thrive.

Behind ornate archiecture, the plant churns out a simple service.

Start off your holiday right with this spirited cocktail made with Watershed Distillery's Nocino.

Cook Up a Brazilian Feast At Home

Pav's Creamery Helps Us Chill Out With Its Boozy Adult Shakes

Slurp on the holiday-themed Christmas and Cream shakes all monthlong.

Uncork a bottle of red or white from one of these local spots.

Find an open fire and get roasting with these comforting dishes from local chefs.

Chester Chin looks on as his contractor begins demolishing his restaurant.

Can Cleveland Find an Activist Spark?

The 1969 Cuyahoga River fire was a symbol that lit up a movement. Do we need something similar to ignite change today?

Cleveland's Got Talent, Too

Here are three locals we'd like to see on stage for America's Got Talent auditions.

Naughty or nice, these four picks are sure-fire ways to elevate your gift-giving cred.

We get an inside look at the greeting card company's new Crocker Park digs.

Not only does the Cleveland Fire Department have a fireboat, it has had seven of them.

Behind ornate archiecture, the plant churns out a simple service.

The museum's conservation department offers behind the canvas looks at restoring centuries-old artworks.

We glimpse how history is unearthed in the museum's archaeology lab.

If a stage prop isn't in the theater company's 11,000-square-foot space, it doesn't exist.

William Sommer's mural in the library's main branch is a good reason to get your nose out of a book.

Lift you spirits with a hike at this lakefront nature preserve built on two sunken freighters.

Get a little closer to the Milky Way in Montville Township.

You've seen the new downtown supermarket, now see the renovations it took to make it happen.

Uncover the history that lives in the previous homes of well-known Northeast Ohioans, from the road to recovery to a man stuck in time.

A secret farm in the shadow of skyscrapers and First Energy Stadium fuels sustainability at the center.

Three Clevelanders give us the inside scoop on their favorite spots in the city.

A quarter-mile up provides a good look at Cleveland — scratch that — Northeast Ohio.

We give the challenging lanes at the 76-year-old bowling alley our best shot.

You probably missed it during those exciting watch parties, but a 23-year-old piece of public art nods to the Gateway District's past.

That house in Cleveland Heights with a tree stuck in it? Turns out there's more to the story.

Starbucks isn't the only place you can score some tasty secret menu items.

Hidden Cleveland: Rock and Roll Hall of Fame and Museum

Only the best backstage pass will get you into the Rock Hall's vault.

The catacombs below the Public Square landmark probably aren't haunted, but that doesn't mean they aren't creepy.

Dig into the interesting finds at some of Cleveland's lesser-known museums.

From the Warner & Swasey Observatory to Aviation High School, we root around for some long lost structures.

Shhh. Don't tell anyone, but here's you ticket into three secret spots.

The script Cleveland logo on the former station's roof is rarified air in the selfie game.

Get lost among the hundreds of thousands of books in this Ohio City gem.

Actress Monica Potter breathes new life into her childhood home while devoting herself to rebuilding the city she loves.

In Memorium: The Barking Spider Tavern

A poetic farewell to the University Circle landmark.

Here are dozen new spots perfect for kids, foodies and even that competitive cousin we all have.

Decorate your home this season with these three throwback finds.

A journey through musty journals reveals a fresh path.

One Question with Mike Polk Jr.

The Factory of Sadness comedian tries to convince us to see his New Year's Eve show.

Check out these neighborhoods for the best light shows.

This Place is Now a Home

Cleveland has always welcomed refugees from around the globe. But as the worldwide crisis grows, does our city have the resources and the will to open its doors even more?

The issue of refugee resettlement is a hot-button issue, especially after the election, but we must work together and show strength.

See Tesia and Aaron Benson’s costumes and set at Dobama Theatre’s Peter and the Starcatcher this month.

An Unsung Master Gets His Voice Heard

Russell Atkins is Celebrated in a New Poetry Book

He aims to impact with his Warehouse District gallery and this month’s Idolatry art exhibition.

The experimental Tremont theater company needs to raise money by the end of this year to keep its Scranton Road facility.

We Feel the Love In Buckeye Thanks to Damien Ware

The poet helped create a mural that spreads positive vibes in the East Side neighborhood.

Mary Elliot whips up lazy-guy-friendly products such as beard oil, soaps and aftershave.

From beating addiction to surviving a heart attack, these healthy heroes share how they overcame the worst moments of their lives.