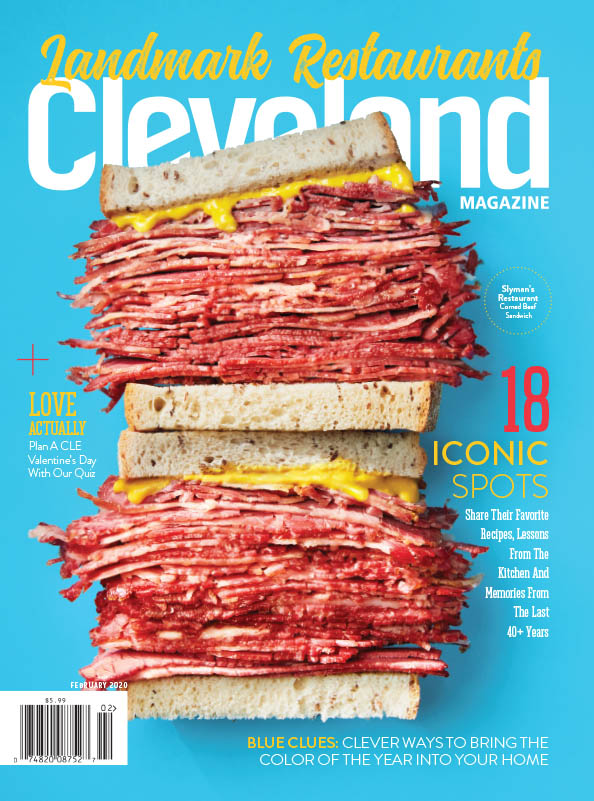 10 of Cleveland's Most Romantic Restaurants

The owners, chefs and general managers behind some of Cleveland's longest-running restaurants share life lessons and classic recipes.

Brad Friedlander sets sail on a sea-worthy approach in the former Moxie locale.

Since 1964, this Hungarian restaurant has been serving up its goulash recipe.

The 72-year-old Rocky River diner shares a replica recipe, without giving up any family secrets, for its popular peanut butter burgers.

The 61-year-old Little Italy bakery shares its recipe for butterball cookies with us.

Rich in Jewish tradition, the East Side deli has been serving customers for 64 years. Here's a take on its on popular matzo ball soup.

The Strongsville restaurant celebrates its 40th anniversary next month.

Billed as "the oldest restaurant in Cleveland," this Little Italy favorite has been around since 1918.

While the restaurant opened in 1954, current owner Fadi Daoud's changes to the burger have impressed its customers.

Kim Berry is now the owner of this Rocky River tavern, which her parents started in 1963.

The history of Johnny's Bar on Fulton stretches all the way back to when current owner Bo Santosuosso's grandmother opened it in 1924 as Louise's Gardens.

For 50 years, Longo's Pizza has been tossing up tradtional pizzas in Mentor.

The Dublin Lawyer recipe has been a staple at this 55-year-old Cleveland Heights eatery.

With a delicious menu and stunning views, Pier W has been a dining destination since 1965.

The elegant fine-dining restaurant in Beachwood has been the hallmark of owner Carl Quagliata for 44 years.

The popular St. Clair Avenue deli has been stacking sandwiches for more than 55 years.

The iconic Eastern European restaurant transitioned to a cafeteria-style restaurant in the 1950s.

The family-owned barbeque business in Warrensville Heights has been churning out ribs and Polish Boys for 78 years.

The Supreme Master Nachos from the Cleveland Heights vegan spot are so good you'll be fine with forgetting the beef.

Four Chili Recipes To Spice Up Your Life

Chefs from Laurentia Vineyard & Winery, Herb'n Twine, Ninja City and Momocho and El Carnicero show us how to take the comfort food up a notch.

The Cleveland native creates a format for learning to cook with everyday people and world-renowned chefs.

Landmark, Lox, Stock and Brisket and The Plum have our mouths watering at these seriously juicy dishes.

Start with the curried lamb and apricot hummus at the Cleveland Heights spot.

Nearly 300 Northeast Ohio women are banding together to make a lasting impact within their communities with the help of 100 Women Strong Ohio.

How I Learned to Speak Clevelandese

A writer's accession to her adopted city and its language.

Now called The Athlon, we take a look at what went into the project that created a workout space and new luxury apartments but retained the building's historic elements.

Why The Shaker Square Converstation Misses The Point

Instead of what to do with Shaker Square, the discussion, one writer believes, should be "For whom does Cleveland build?"

Thirty years after her body was found, the new podcast Amy Should Be Forty remembers the fifth grader for who she was, not just her tragic end.

Mockingbird follows the story of a high schooler with Asperger's Syndrome.

The posthumous exhibit at Cleveland Museum of Contemporary Art dives into the Mission School art movement leader's blending of folk and contemporary styles.

Skip the chocolate for sonic treats from Whitney, the Cleveland Orchestra, Cody Jinks and Trippie Redd

The Boss' 1953-54 guitar was featured on the cover of Born to Run and now lives in the middle of the museum's most expansive exhibit.

The photography exhibit at Cleveland Museum of Art offers a behind-the-scenes look at photo shoots featuring the Beatles, Marilyn Monroe and more.

We revisit the infamous comedian's recent angelic moments — and one Cleveland slight — ahead of his Feb. 29 show.

Protect Your Floors This Winter

Hardwood floors can take a beating during winter, so Cleveland Hardwood Restoration shows us how to prepare accordingly.

Sherwin-Williams' Color of the Year Has Us Feeling Blue

Ring in the '20s with Naval, a color that feels modern, natural and exciting.

Go inside this Moreland Hills kitchen with two islands, a fireplace and a custom light fixture.

Treat your Valentine to one of these blank slates from Triple Threat Press.

How To Dress To Impress At Playhouse Square's Jump Back Ball

These style tips from blogger Jen Rome will have you turning heads on the red carpet.

Take Your Best Swing At Topgolf

Terrestrial Brewing Co.'s Puppy Bowl is a pick-me-up for any disappointed member of the Dawg Pound.

Ward Off Winter At The Kurentovanje Festival

Ben Turshen Meditation, a new meditation studio in Hingetown, can help you center yourself.

Camp Guide: Find The Right Camp For Your Kid

Kids can work through their bucket lists with camps such as Laurel School's camps and Lion's Leap that cater to special interests and broaden horizons.

Camp directors from Falcon Camp in Carollton and Hiram House Camp offer their tips on how to manage what could be a difficult experience.