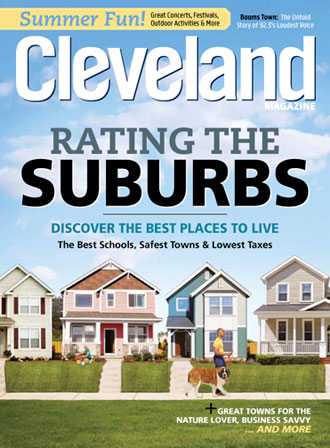 SB Eighty One takes up where the popular Saucy Bistro left off, with a fresh look and great food.

Next time you need a drink, pass on the gin and tonic and order up one of these creative cocktails.

If you only know Chuck Booms as the loudmouth on Sports Radio 92.3 The Fan's morning talk show, don't tell him. The Euclid native was a rising comic in the '90s who counts Jerry Seinfeld and Brad Garrett among his early mentors. He was a frontrunner for D

The Tribe's new Kids Clubhouse lets the little ones play while you keep an eye on the game.

The Billy Beane of local government is changing the game. All he needs is someone to trade with.

Classical pianist Shuai Wang brings Bach, Beethoven and Brahms to a bar near you.

With an affection for history and an eye for film, Kirtland resident Morris Everett Jr. owns one of the most extensive holdings of entertainment photos and posters in the world.

In Harvey Pekar's Cleveland, the late comic book author gives us his final thoughts on a city he had long identified with.

A new Cleveland Museum of Art exhibit goes inside the life and works of renowned architectural etcher John Taylor Arms.

The third memoir from author Loung Ung examines the process of healing a life torn by war and trauma.

The Band Perry talks about hitting the road, writing lyrics and how they'd classify their music.

Want to check out some cool street fairs? These Cleveland neighborhood events are a good start.

The Beach Boys reunite for a tour and new album that marks the 50th anniversary of the band's rise from the Southern California coast.

From duct tape to double vision, here are 10 festivals you should check out this summer.

The Cleveland Metroparks Zoo's Creature Comforts event shows off enrichment exercises that help to stimulate the animals who call the place home.

From a night at the museum to live bands at the zoo, here are five not-to-miss summer soirées.

Russ Borski and Terry Pieritz had to get creative to bring this summer's Cain Park production of Avenue Q to life.

Forget the air-conditioning. The Cleveland Metroparks has some cool summer events.

Rating the Suburbs 2012: For the Bike authority

This inner-ring suburb has plans to become one of the most bike friendly communities in America.

Rating the Suburbs 2012: For the Business Savvy

Focusing on economic development bodes well for the city and its residents.

Rating the Suburbs 2012: For the design focused

Rating the Suburbs 2012: For the Eco-Minded

A community garden brings residents together for more than just vegetables.

Rating the Suburbs 2012: For the Nature Lover

Filled with affordable homes and a thriving downtown area, the city adds nature to its list of amenities.

Rating the Suburbs 2012: For the School Belle

When its schools faced tough cuts, residents responded by passing a new levy.

Rating the Suburbs 2012: For the Value Conscious

In a city focused on ways to save money, skimping on great city services is not one of them.

Rating the Suburbs 2012: For the View Finder

Traditional meets modern with the addition of a riverfront townhome project in the East Side village.