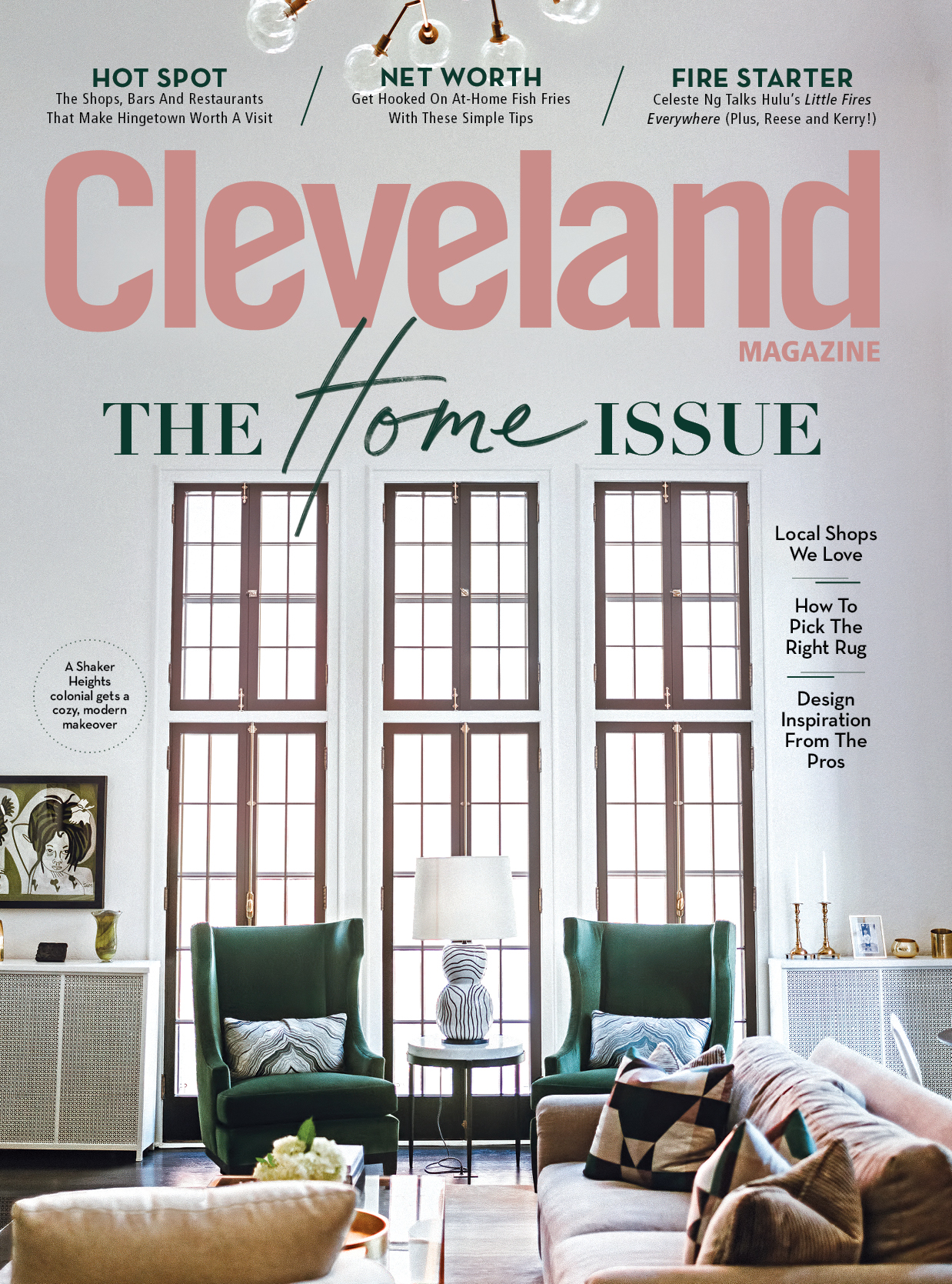 Pick a fresh paint color, buy a new rug, display meaningful artwork. Transform your house into a space you not only call home, but one that you’ll want to cancel those plans and hang out in night after night. Here’s how.

This Rocky River restaurant boasts a 22-seat bar and more than 130 different kinds of whiskey.

Hola Tacos Brings The Heat Even In Winter

Cleveland's concert halls are striking a chord with surprising, flavorful and interesting food.

1931: The Seeandbee Sets Off For Buffalo

The four-deck steam cruiser carried passengers along the Great Lakes.

From the Cleveland Foundation's MidTown headquarters to Sherwin-Williams' downtown facility, keep an eye on these upcoming projects.

A Day In The Life: St. Patrick's Day At The Harp

The luck of the Irish, and a whole lot of planning, gets the Detroit Avenue pub through busy St. Patrick's Days.

A Poetry Paradise Lost By Reply All

One writer's favorite Yahoo Group implodes when everyone gets every email.

Editor's Note: Inside The Soul Of Your Favorite Kicks

There's more to sneaker culture than meets the eye.

The founder of environmental news site EcoWatch talks to us about her eXXpedition sailing trip, which studied the effects of plastic on the world's oceans.

Susan Porter Is Creating A Cooking Network For Senior Citizens

With Recipe Remix, she's helps older citizens reshape the way they think about food and connect with one another.

"Restrooms of Cleveland" Finds the Beauty In Cleveland's Bathrooms

New from Belt Publishing, Raechel Anne Jolie's new memoir chronicles her path to understanding her identity as a queer femme in the working class Rust Belt.

The Beachland Ballroom & Tavern owner talks her love music, a venue's struggle to survive, the Waterloo arts district and more.

The co-owner reminisces on booking nearly 11,000 shows on The Beachland Ballroom & Tavern’s two stages and thinks toward the future.

On March 21st the documentary film crew will revisit one of Cleveland's weirdest local legends with a screening of their 2015 documentary.

4 Tips For Displaying Your Collections

From Funko Pops to vinyl records and sports memorabilia, here's how to let your collections shine.

From Ring to Google Nest and more, we break down which smart home devices are best for you.

A Greek Revival Home Becomes A Welcomed Space For All

With an edgy vibe and feminine details, the designers at Modern Smart Home create a live-work space that reflects the homeowners' aesthetic.

Choose The Right Rug For Your Home

A beautiful rug has the power to tie a room together. Here's everything you need to know.

Choose The Right Tile For Your Home

From subway to penny rounds, here's a primer on how to pick the style that works for you.

Splash a coat of paint on these areas of your home for an instant mini makeover.

Home Stores We Love: Style Your Home With Help From These Local Spot

Block Bros. At Home, Cleveland Lighting, Sapphire Pear and more are filled with gear you need to create the home you want.

Inside An Intimate Shaker Heights Colonial

Pick a fresh paint color, buy a new rug, display meaningful artwork. Transform your house into a space you not only call home, but one that you’ll want to cancel those plans and hang out in night after night. Here’s how.

Clevelanders have more access to cool kicks than ever. See the city’s sneaker scene through these Clevelanders’ collections and prized pairs.

Nab the bag that LeBron James, Meghan Markle and other stars love to carry.

From a James Beard-nominated deli to a trendy resale boutique, these spots have it all.

Whether you're a bird watcher, path maker or inquisitive wanderer, we've got something for you.

Ask the Experts: How Can Parents Make The College Application Process More Appealing?

Mark Ledoux, director of recruitment and undergraduate admissions at Kent State University, explains it's important to partner with the students.

Ask the Experts: How Can Parents Prepare Children To Study Abroad?

Michael Ciuni, director of the Center for Global Citizenship at Hathaway Brown, explains you need to be open.

Ask the Experts: How Can Schools And Parents Work Together?

Patrick Gallagher, head of school at University School, explains how to build a student's character.

Ask the Experts: What Are The Benefits Of Summer Camp?

Ask the Experts: What Benefits Do College Credit Plus Programs Offer Students?

Ask the Experts: What Benefits Do Students Gain From Performing Arts?

Lucas Clark, fine and performing arts program coordinator at Gilmour Academy, explains how it affects other areas of study.

Ask the Experts: What Is The Parents' Role In Children's Academic Success?

Megan Rutkowski, director of Magnificat High School’s student support services, head of the Academic Success Center and school psychologist, explains how to connect with your students.

Jennifer Shaw, department chair of fine arts and a music teacher at Lake Ridge Academy, explains that it takes balance.

Ask the Experts: What To Consider When Choosing A School For Your Child?

Ask the Experts: When Should The College Search Begin?

Ask the Experts: Why Is Art Education Important?

Kristen LoPresti, visual arts teacher at Beaumont School, explains why it's essential for parents to encourage their kids to pursue art.

Ask the Experts: Why Should Middle School Students Learn To Code?

How Parents Can Engage With School Tech

Expert tips on why and how parents should know what tech their kids are using and learning about.

While continuing education is important, kids should be using summer as a chance to reset and learn socials skills.