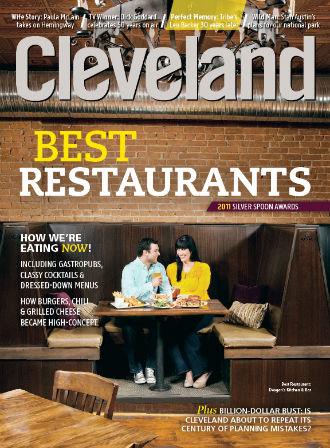 Best Restaurants 2011: Hip to Be Green

Best Restaurants 2011: In the Vault

Best Restaurants 2011: Off the Menu

Pop-up dining takes the show on the road with tasty results.

Dim and Den Sum founder Chris Hodgson hit the food truck fast lane last summer, paving the way for others to follow in 2011.

Call it the Melt phenomenon. Customers go to single-dish-themed spots for the novelty, says Matt Fish of Melt, but that's not enough. "It goes beyond the whole nichey thing," he says. "The food quality has to be dead-on, creative enough to keep people com

Best Restaurants 2011: State of the Plate

Forget the filet. Chefs prove no part of the animal is off limits.

We love these 20 proven spots for keeping it fresh season after season.

This is what it takes to make a great cocktail.

Banana Blossom gives Thai cuisine a fresh feel, both in taste and presentation.

Catch a Beachwood bakery's cake-crafting trials and triumphs on WE TV this month.

Chess games with his father inspired the art installation Donald Black Jr. will unveil this month at the Cleveland Public Library reading garden.

Designing a downtown that works isn't as easy as it looks on CityVille. As Cleveland embarks on its $1 billion building boom, are we about to repeat our century of mistakes?

Life According to Len Barker

A sense of connection come with more than square feet and architectural details.

The Cleveland Metroparks Zoo's new African Elephant Crossing opens this month, offering a more natural way of life for the pachyderms that call it home.

After overseeing federal parks out West, Stan Austin brought his record of collaboration here for a new task: forging a fresh identity for the complicated 33,000 acres known as Cuyahoga Valley National Park.

Call of the Wild

Eric Coble's My Barking Dog brings a ghostly coyote into the lives of two lonely people.

Author Paula McLain's new book peers into the private life of one of America's most celebrated writers.

Dylan Baldi ditched college for Cloud Nothings, one of the most talked about new indie-rock names of 2011.