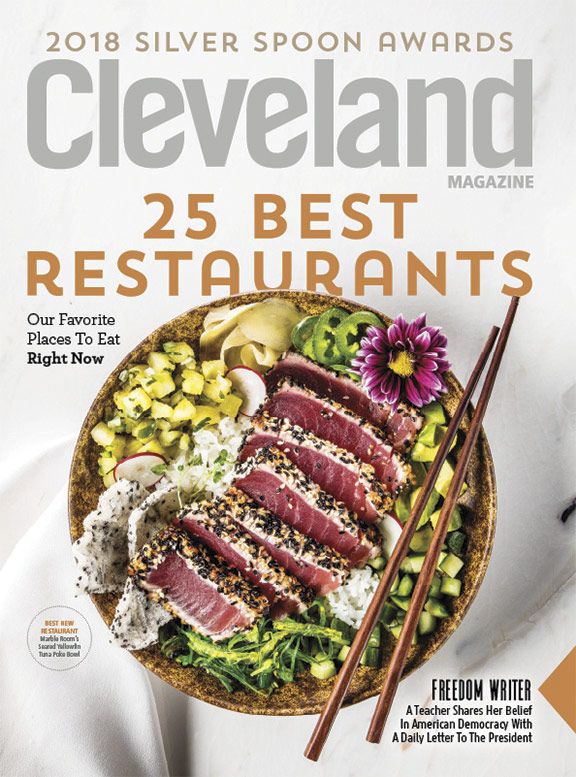 You've seen this swanky new dining experience on Instagram, but our 2018 Best New Restaurant backs up the hype on the plate, too.

These are the best bites in the city, selected by you, the readers.

You'll feel at home in this three-story home on Larchmere Boulevard that serves up the best Brazilian food in town.

From dinner to dessert, Rocco Whalen continues to stand out among Tremont's dining mecca.

The Mediterranean-inspired, small-plates restaurant on Larchmere Boulevard is getting a Guatemalan flair.

Atop an elevated all-beef hot dog, this simple, free-for-all experience is as American as it gets.

A meat-focused menu brings tradition and fine-dining to downtown Willoughby.

After two decades, Michael Symon's iconic spot has still got it.

Located on the Superior Viaduct, Luca brings the taste of Northern Italy to Cleveland diners.

You've seen this swanky new dining experience on Instagram, but our 2018 Best New Restaurant backs up the hype on the plate, too.

The off-the-beaten-path Ohio City spot is more than just elevated Mexican food — it's a crash course in culture.

With French technique and Italian recipes, Nora is a Little Italy gem.

The only thing more beautiful than Pier W's view is what chef Regan Reik puts on the plate.

Get more than just a taste of Latin street food at this Broadview Road restaurant.

The Lakewood bistro took a risk by serving small plates to a crowd that expects to leave stuffed — and it paid off.

Tall, meaty and delicious, Cleveland's signature sandwich continues to make its mark on the city.

Immerse yourself in the world of Thai Thai, where owner Kiwi Wongpeng is connecting Clevelanders around Thai street food.

One of Cleveland's most interesting eateries — and last year's best new restaurant — continues to evolve.

Chef Matthew Spinner educates Cleveland diners on his own version of Japanese food.

A young, Chinese-born chef breaks out with his modern spin on traditional Ramen dishes.

From honey ginger to white peach, we've got a drink for everyone.

A Trip To Venice Just Got A Lot Cheaper

Don't miss out on the attention-grabbing menu and stunning decor.

Discover The Magical World of Foraging For Mushrooms

Let this guide to foraging mushrooms in Cleveland help you dive head first into the delicious search.

Often confused as the standard green, broccoli rabe can add a layer of bitterness to any dish.

Get The Scoop On The James Beard Award Semifinalists

Karen Small and Jill Vedaa share three dishes that left a mark on them.

Led by a 34-year-old chef, the Ohio City spot plays to win with strong Eastern techniques and Western creativity in its flavorful ramen, imaginative bao and more.

1930: Clevelanders Gather For A Balloon Race

Although the first day was rained out, more than 200,000 people came to see the event the second day.

A Clevelander's Guide To Iceland

A Man's Concussion Helps Him Find Himself

His head injury left him able to do nothing but rest, which is exactly what he needed.

Samantha Schaedler mailed a letter to Donald Trump on Inauguration Day. Every day after, she sent another, driven by her belief in our political system.

Inspired by her background in creating artistic retail displays, Lauren Skunta created her own company that designs displays in multiple mediums and moved home.

The opening of his bistro, bocce and bowling space is a homecoming for Beachwood native Dale Schwartz.

See the kick-push bikes in all their glory at the Strider Cup National Race Series in Public Square May 26.

The Dominique Moceanu Gymnastics Center Sets Out To Right Wrongs

As the Olympian opens a new center in Medina, we talked to her about the 1996 Olympics, abuse in the sports and the future of the sport.

Who Will Challenge Armond Budish?

With the county executive running virtually unopposed, we asked a few rivals to suggest a second-term agenda.

Cleveland's LGBTQ community should recognize what's been here all along — a beautiful, if imperfect, family.

The legendary comedian behind The Carol Burnett Show tugs at her ear — and audiences' heartstrings — with her new touring show.

With an avant-garde approach, Alice is a version of the beloved Alice in Wonderland that audiences have never seen before.

The project, which resulted in 100 instrumental tracks, helped the Avon native bounce back while fighting cancer.

Check out four of the works we love.

Check Out This Awesome Backyard

How To Make Spring Cleaning Easy

These five tips will make those annual cleaning tasks a little less taxing.

Plus, an introduction to all-natural products that will give you a boost.

Date Of The Month: Sneak A Date At Walnut Wednesday

Don't let overtime hours get in the way of your love life.

Make the most out of Mother's Day with these three mom-centric dates this month.

By taking a whole-health approach to life, you can stay fit, gain energy, live stronger and make the most of your older adult years.