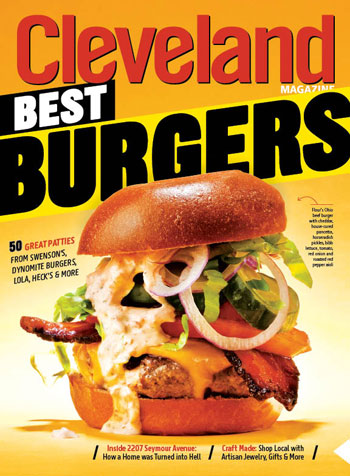 Be thankful that you can enjoy turkey day no matter your dining preference.

District adds to the emerging dining scene in PlayhouseSquare area with an act that's approachable and affordable.

For a century, the house sheltered working-class families, hosted holiday parties and held fond memories. Then Ariel Castro made it into a secret prison.

A Handmade Tale: Objects of Desire

We round up eight shops to get artisan goods.

A Handmade Tale: The Rise of the Artisan

A Handmade Tale: Trends We Love

Whether you like checking off your list early or last minute, there's a holiday market for you.

Best of the Worst

A new initiative hopes to create outdoor spaces that will thaw your icy resolve to stay inside.

The video game cover is this generation's version of the Wheaties box. So as NBA Live 14 featuring Kyrie Irving and NBA 2K14 with LeBron James go head-to-head(we know which one we're buying), we reflect on a virtual sports legacy as thin as our real one.

Dan O'Shannon pays tribute to his hometown influences with an appearance at Ghoulardifest.

Life According to ... Mike Brown

If you've heard of Hingetown — but haven't the slightest idea what it is — you're in good company. Here's a quick guide to the emerging district.

Thanks to friend Zach Braff, one of the earliest songs Shaker Heights native Joshua Radin ever wrote, "Winter," was played on Scrubs. Since then, Radin has been making contemplative music and recently self-released his fifth album, Wax W

Frankie Valli and the Four Seasons bring their timeless tunes to the Palace Theatre this month.