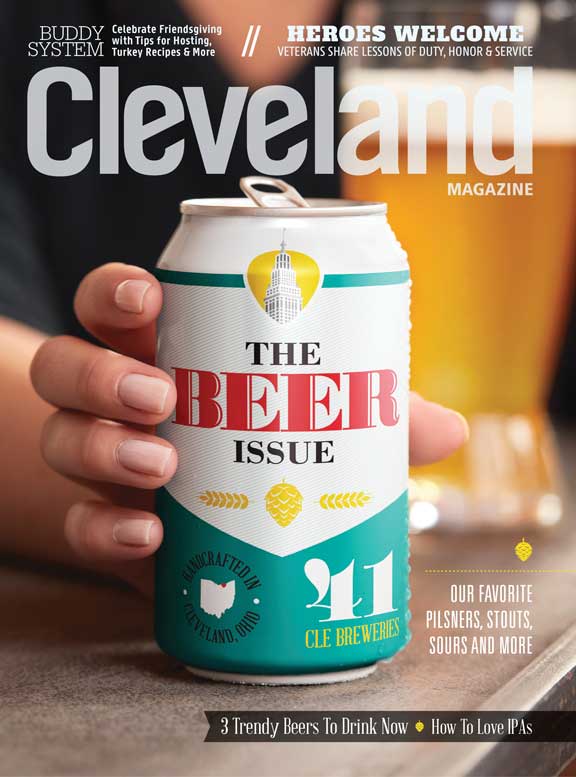 The third time's a charm for Chris Verich who kept brewing through his two failed brewery attempts.

5 Tea Shops To Keep You Warm

Get your loose leaf game on point.

A Dessert We Love: Satisfy Your Sweet Tooth With This Cannoli Cookie

Nab one of Ange Lupica's treat at Crust's Midtown location.

Robert Hernandez's taproom serves up brews that even non-beer drinkers will like.

Brian Weaver and Mathias Hauck funnel fresh ingredients from the kitchen to the kettle.

Come here to catch up with friends, not to catch the game.

Thoughtful craft beers made in small batches make this place stand out.

This place is all about the twist from their food to their beer.

Beer Guide: Butcher and the Brewer

John McGroarty has tangoed with 60 different styles of beer in his first year as brew master.

Luke Purcell is all about having fun with his beers ranging from saisons to wheat ales.

Reinspire your palate with these hoppy, fruity beers.

This 40-seat brewery is old-school to the core.

This brewery pays homage to the area's Slovenian roots with Eastern-European style beers.

Ohio's first craft brewery still keeps up with the trends.

Creative brews will put this German gem on the top of your list.

Everything about this brewery is a family affair.

All the beer here is made with ingredients shipped from Germany.

You won't find any overspiced or heavy alcohol beers at this classic joint.

These award-winning brews are accompanied by nightly events and a hearty menu.

Beer Guide: How Two Friends Turned A Barn Into A Brewery

Inspired by Benjamin Franklin, the duo looks toward a successful future.

Come here after class to grab a pint or come here to show off your own brewing skills.

Medina County's first craft brewer offers something for the traditional sipper and the adventurer.

Put down that Bud Light and give a Cleveland-made brew a try.

Grab a beer, play some pinball and grab some grub from the rotating lineup of food trucks.

This local brewery can pump out nearly 1,000 gallons of beer per day.

Sitting on the lesser-trafficked side of town, Masthead Brewing Co. serves up wood-fired pizzas with its beers.

Grab a beer that is sweet and punchy enough to rival your favorite cocktail.

This small brewery can get as creative as it wants with a one-barrel system.

BrewDog USA is now churning out its New Albion Red and Oatmeal Stout.

From Ohio City to Canton, we're looking forward to these fresh spots.

Cleveland's industrial past meets its creative future inside of Noble Beast.

Experimentation and authenticity have been key for Platform's rising success.

Chemist-turned-brewer Ronald Shea will give you a science lesson on the art of making beer.

This Avon brewery runs the gamut in terms of its flavor selection.

The nearly 24-year-old brewpub has a list of time-tested seasonals.

Sip on a beer-wine hybrid or snack on a clam-covered "apizza" at this experimental spot.

Find comfort in the classics at this 22-handle taproom.

Weird ingredients are Ralph Sgro's forte having brewed with everything from smoked pig bones to gummy worms.

Brew your own beer in their 6-kettle person brew system.

Beer Guide: These Three Inventive Brews Are Worth Hunting Down

While they don't have a taproom yet, you can still find them locally.

This tap room has expanded into the Flats.

Fat Head's Brewmaster Matt Cole shows us that not all IPAs are created equal.

Starting with a brewery kit he got for Christmas, Patrick Armstead now makes authentic German beers at his nanobrewery.

Ralph Sgro tell us what we can expect in our glasses next.

Even if you're not a fan of porters, Willoughby Brewing Co. will win you over.

Drink up like it's your job at this brewery that pays homage to Cleveland's working class.

Here's How To Throw The Perfect Friendsgiving

From birds to booze, we have the recipes to impress your crew.

Make The Holidays Sweeter With These Five Local Pies

From vegan, apple and pumpkin, these pies take the cake.

The Alcazar Fencing Club still produces top-notch fencers despite their change in location.

As our country honors its approximately 20 million veterans this month, seven members of the military who served from World War II to Afghanistan reveal what they’ve learned about duty, freedom, honor and what it means to protect those who cannot protect themselves.

Breeze Through Shopping With Our Holiday Market Guide

Get the perfect gifts with these tips and advice.

A passion for cooking strengthens a mother and daughter's bond.

We Dig Into Zack Reed's And Frank Jackson's Social Trends.

Peace Community Church is one of the 800 sanctuary churches in the U.S.

Enjoy the star-studded show with these tips.

The Cleveland Browns Connect Generations Of Fans With Shared Misery

How the love for a losing team brings us together.

Want To Win A Pair Of Air Jordans?

Owner Allyson Kindlesparker tells us how to make the most of you trip.

Cleveland's first black mayor is honored on the 50th anniversary of his election.

Five Things To Know About The New Children's Museum

A $10 million renovation to a Millionaires' Row mansion brings new life to the kid-friendly place.

Front International Kicks Off With 18 Artists

The yearlong program will consist of art, research and community involvement.

Kids Film It Festival Is Back For Its Second Year

Participant Ryan Levine tells us about his love of film.

Derf Backderf recalls what his friend and classmate was like at Revere High School in Bath.

We talk to the punk rocker about Cleveland, influencing rock and more.

Read Up On The World's First Little Free Library Neighborhood

His Glenville building will now serves as the Front International art residency.

The Tremont bookstore returns with an expanded space that includes a Crust pizzeria, coffee shop and more.

Shelley Turk and Adam Taseff show off their CLE pride with one-of-a-kind prints, clothes and maps.

Get Festive With This Easy Thanksgiving Nail Art

Elizabeth Crespo shows us how to turn your tips into turkeys.

Beyond Bingo: Get More From Your Senior Living Community