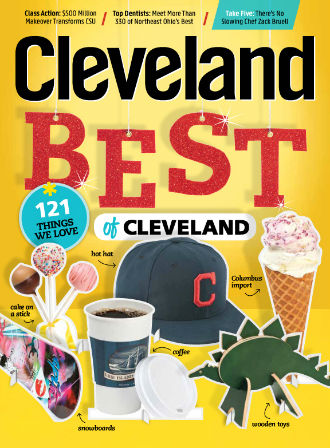 C2 samples from Mediterranean cuisine for a creative and nutritional menu.

Flour's dishes change, but quality house-made ingredients are always on the menu.

Once an outpost of educational last resort, Cleveland State University has undergone a $500 million makeover: new buildings, green space and vitality. Now, under president Ronald Berkman, the university is integrating itself into Cleveland as never before

Does Zack Bruell Finally Have Your Attention?

After opening four restaurants since 2004 and with a fifth on the way, the culinary pioneer who helped put Cleveland on the fine dining map 26 years ago talks about perfection, getting overlooked and why he'll probably never ever be satisfied.

After two years of scaring people, Nick Francis and Max Simon are taking the chills to a new level.

High-society hairdresser Colin Lively reconnects with his clients and the city.

The Towpath should be our region's greatest asset after the lake. But that depends on getting its last links finished — and soon.

Former Hole bandmate Patty Schemel pulls back the curtain on the '90s grunge rock scene in Hit So Hard, her documentary playing the Akron Film Festival.

Talk of the Town

The host of A Prairie Home Companion brings his one-man show to Cleveland.

Not sure what plants to go with this holiday season? We asked four florists and garden centers for their holiday decorating ideas.

Furniture and appliance retailers share their takes on the most popular trends and fresh ideas that will help you dress up your home in time for the holidays.

The 2011 Top Dentists resource is your guide to more than 330 of the best dentists and specialists in Greater Cleveland.

Northeast Ohio's colleges and independent schools are improving education throughout the region.

As the state pushes to increase the number of people graduating with bachelor's degrees, more students are taking college courses while in high school. (And some don't even go on campus to do it.)

Preschool isn't what it used to be. Early childhood education in some schools now includes foreign languages, environmentalism and a social curriculum.