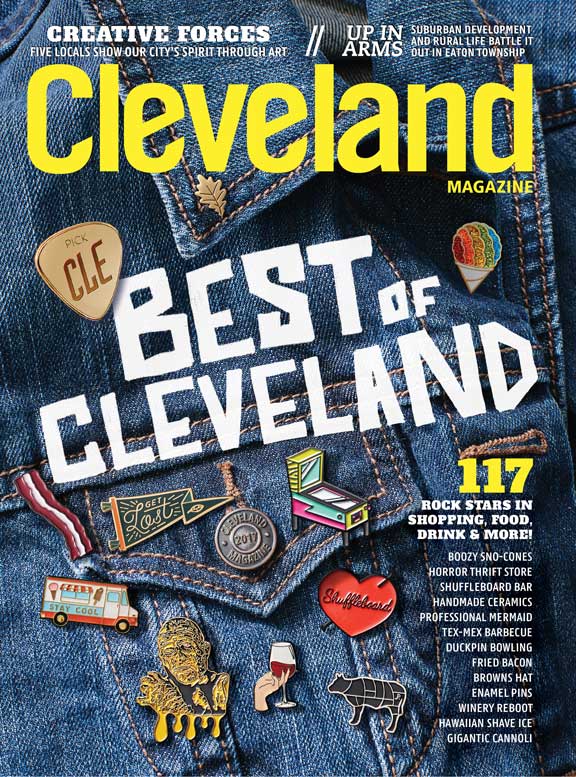 Let's get this party started! Just when you thought the city's energy had peaked, we found 11 on the dial. We've got 54 headlining foods, shops and entertainers ready to keep the vibe alive. Plus, readers vote for their faves.

Let's get this party started! Just when you thought the city's energy had peaked, we found 11 on the dial. We've got 54 headlining foods, shops and entertainers read to keep the vibe alive.

5 Clambakes Worth Diving Into

These classic Cleveland spots are a shore thing.

A Drink You Will Be Proud To Bring Tailgating

Stir up this spin on a bloody mary before watching the Browns.

You and five friends can relax and uncork with the Wine Tasting & Tour package.

Rudy's Strudel and Bakery Looks To The Future

Scary Good: How To Host A Halloween Party In Four Eerily Easy Steps

Craft and brew tasty treats that will have your guests cackling with joy.

Ushabu's Matthew Spinner Is A Professor of Japanese Cuisine

The Tremont restaurant dives into Japan's culinary history — one region at a time — with a well-researched menu.

The legendary mayor's tenure in City Hall had just ended.

The founder of Shooting Without Bullets helps Cleveland youth find their voice through art.

The Cleveland Public Theatre actor and LGBTQ activist finds support in his many roles.

The executive director of Land Studio helps create engaging public spaces with a mix of art and design.

The mixed-media artist brings people together by sharing his cultural traditions.

Get Your Dose Of Throwback Cleveland

A grandmother finds purpose in the day-to-day life of a child.

Evaluating the financial impact of urban sprawl means we're only looking at part of the problem.

The expert climber turns his 45 years of experience into fun for everyone.

The Score On The Cleveland Cavaliers Nike Uniforms

From logos to font, we give our thumbs ups and our thumbs downs on the new features.

As potential development and rural culture collide, Eaton Township is in the crosshairs of a controversy that threatens its identity.

What Happened to The City Club's Open Question Period?

As the City Club of Cleveland tweaks its debate format, its mission is more important than ever.

Hear the songs on vinyl records in listening booths at the Museum of Contemporary Art Cleveland.

The roaring decade wasn't all glamour, it was a time of great contrast.

Color Your Home In Cleveland-inspired Shades

John Eslich Is Committed To The Haunt

The owner of Canton's Factory of Terror takes over Akron's Haunted Schoolhouse and Laboratory.

Run To This Film Festival About Running

Events, online resources and more are dedicated to supporting artists.

The Suspense: The 48-Hour Film Project Takes On Horror

Trick Out Your Canine's Costume This Halloween

Tips on how to dress up your dog for 10th annual Spooky Pooch Parade.

Yes, You Can Craft A Colorful Fall Bouquet

Dean of the Boler School of Business at John Carroll University

Director of the upper school at Hathaway Brown

High school students are discovering the benefits of a semester or year studying on a farm, in the mountains or abroad.

Schools are teaching digital literacy as a way for kids to become critical thinkers, collaborators and responsibly engaged.