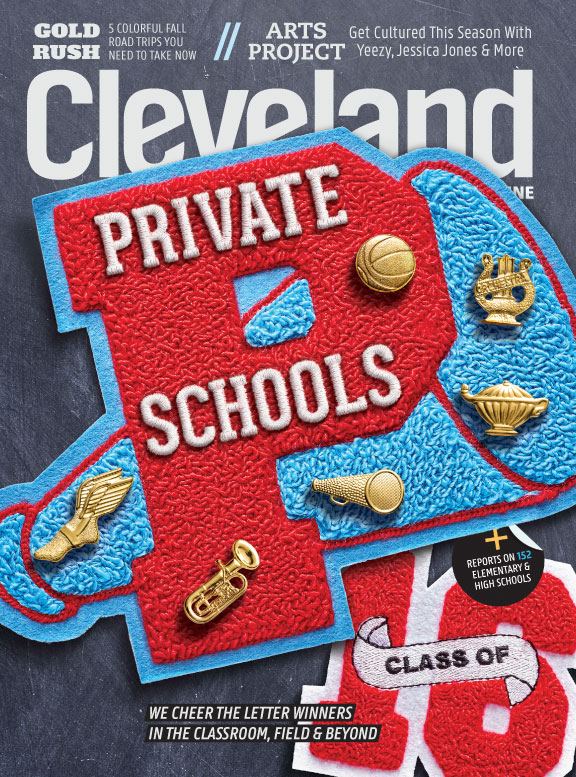 3 Techniques to Keep Your Loaves Awesome

Blast off with this amalgam of beef, confit egg yolks, olive oil and mustard seed topped with caviar.

Get These Tools to Bake Bread Like a Pro

From gadgets to bakewear, these three must-haves will help you rise to the occasion.

Hold Your Lederhosen: 5 German Restaurants to Hit This Month

From Hofbrauhaus Cleveland to Der Braumeister, Oktoberfest fun doesn't have to be an ocean away.

Kantina Takes the Guesswork out of Kosher

We talk chocolate, history and recipes with Jason Hallaman who takes over the 77-year-old business.

We pit the Hilton Cleveland Downtown's The Burnham against the Kimpton Schofield Hotel's Parker's Downtown and the results are delicious.

We Love Bread, Too

You don't need to be Oprah to rise to the occasion and step up your bread baking.

As City Hall celebrates a centennial this year, we look back on its construction.

A CWRU Researcher Creates the Sense of Touch

A Library Project is Archiving Memories from Northeast Ohio Residents

The Cuyahoga County Public Library is tapping into people over 50 to form an oral history of the area’s neighborhoods.

Here's How Some Ohio Politicians Fared Post-RNC and DNC

From Marcia Fudge, to John Kasich and more, we hand out some gold stars (with a little insider help).

King of the Cage

He’s the homegrown world champion who doesn’t play hoops. With a steely work ethic and powerful right hand, Stipe Miocic delivered a heavyweight title in May. And while he may not be the kind of star the UFC needs, he’s exactly the kind Cleveland breeds.

We Won, You Guys! But Did the Cavs Change our Psyche?

Take a look inward at what's really changed now that we are all winners.

What's Next in Downtown Development?

The population of downtown Cleveland is taking off, but steps must be taken to keep the momentum going.

Your Guide to Deciding on the $15 Minimum Wage

Rev. Jawanza Colvin and City Councilman Brian Cummins offer opposing takes on the proposal, which will likely be on the ballot soon.

Big names comes to Cleveland for a jam-packed concert schedule.

8 Theatrical Events To Check Out This Season

Our list of musicals and plays to keep you entertained this fall.

A Wish Come True: The Cleveland Museum of Art Exhibits a Rare Fountain

The Gothic piece is the only functional fountain of its kind in existence.

Airshow to Loud for You? Hit Up These Labor Day Weekend Events

From bird watching to Monty Python and The Holy Grail or the Cleveland Pops Orchestra, we’ve got you covered.

Anger Management: Your Rage is Not As Bad As You Think

Gallery 1299 shows Anger is a Gift with therapeutic art.

Behind the Curtain: The Life of a Ballerina

Sonia Rodriguez pointes out what it takes to dance on the national stage.

Black vs. White: A Play Pits Two Co-workers Against Each Other to Explore Injustices

14th-century artifact displays and interactive fun make up these showcases.

Get Moving To Any Of These Dance Showcases

Get One Last Splash Of Summer At The Blacklight Slide

You’ll rave about these water slides slick with neon-glowing fun and EDM tunes.

Go Baroque at this Barn Party

Hello 2000s. The Used Brings Old-school Emo to the House of Blues

The band plays their first two albums in a two-day throwback concert.

Here’s What It Looks Like to Have a Female President

A Cleveland Public Theatre play mixes gender and portrays our 44 presidents as females.

Paintings, photographs, negatives and more make up these showcases.

The artist plans to live in artwork to raise awareness about homelessness on a multi-city tour.

Movie Monsters Come to Warn You to Save the Planet

An Akron Symphony Orchestra concert flips the switch and asks guests to turn on sounds on their cellphones.

She’s Got Pipes: It’s All About the Voice for Manhattan Transfer’s Cheryl Bentyne

So Meta: The Audience Works with Actors to Solve a Depression-era Mystery

The Knife is the Money, the Fork is Love by a local playwright premieres at Convergence-Continuum.

The Tuscan native, who performs at La Dolce Vita, shares why opera is making a comeback.

A Tony winner tells the story of the president’s fight to the end for the Civil Rights Acts of 1964.

The Drought is Over: Yeezy Returns After 10 Years

Author Lillian Faderman discusses her book on setbacks and work yet to be done for LGBT equality.

The “Youth” singer sways over to Lakewood Civic Auditorium.

Tune Into To These Classical And Jazz Themed Concerts

Plan a visit or two to Severance and E.J. Thomas Hall this fall.

007 Gets a Thrilling Musical Tribute by the Cleveland Pops Orchestra.

What’s that Smell? Local Skunk of Puppy Bowl Fame to Appear at SkunkFest

Wild Theatrics of Elections Take the Stage in a New Play

Larson talks of her father’s inspiration behind Lois Lane and the changing climate on women’s roles in comics.

The 78th Street Studios exhibit showcases art based on the iconic comedy.

Looking for Jewelry and LeBron Sculptures? We Found One Spot with Both

Make Room in Your Closet for This Coat

Time to Update Your Wrist Bling

From faux fur to denim and chain-link straps, these bags will carry you through the season.

The 3,741-acre state park has hiking trails, a like for kayaking and more.

Slow down and relax at this historic Harrodsburg, Kentucky, destination.

French Lick Spring Hotel Will Take Your Breath Away

From a lobby with hand-painted tapestry ceilings a stained-glass dome, there's a lot to discover.

The diplomat and rocket designer finds she is most relaxed while performing onstage.

Cancer took his leg, but not his will to compete.

The junior kick started a student-funded scholarship as a way to give back.

The researcher spends his summers in CWRU labs trying to cure cancer.

The 2-time national debate qualifier can talk the talk, but really enjoys the journey.

Look out: The school's first sophomore to win a state wrestling title spent the summer training.

The school’s media specialist wants the Learning Commons to be a collaboration space.

The economics and business teacher is also part of the indie-pop band By Light We Loom. Cool, right? You'd be surprised.

The Center for Research on Girls director enjoys the challenge of understanding teenagers.

The artist pushes students to discover how art impacts the community and their lives.

After 36 years of teaching, the lover of literature lives out her Shakespearean dream.

The aspiring singer-songwriter found her voice at Nashville's Grammy Camp.

The hoops standout is pure poetry on the court — and off.