East 93rd Street has experienced its fair share of darkness over the years. But this weekend, more than 20 artists teamed up to spread a bright, colorful and hopeful message across the street.

“We wanted to show attention to the neighborhood,” says Ricky Smith, founder of the non-profit Random Acts Of Kindness Everywhere. “But we also wanted Black kids and Black families to see art by Black artists in their community.”

After putting a call out on social media that received more than 300 messages, Smith organized the project with Graffiti Heart owner Stamy Paul. The “Black Lives Matter” mural follows a trend started by Washington, D.C., Mayor Muriel Bowser that has since spread to Akron, Cincinnati, Oakland, Sacramento and more.

Stretching several blocks across the East Side street from Bessemer Avenue to Heath Avenue, each letter of the mural was painted by a different artist and includes different designs, patterns and messages. Artist Isiah Williams, for example, painted a portrait of a Black woman in the letter “B” with a message that read “Black women are beautiful.” Meanwhile, Ilthy founder Glen Infante used the letter “K” for his message of solidarity, painting a black panther and a tiger standing side by side and the message “Asians For Black Lives. 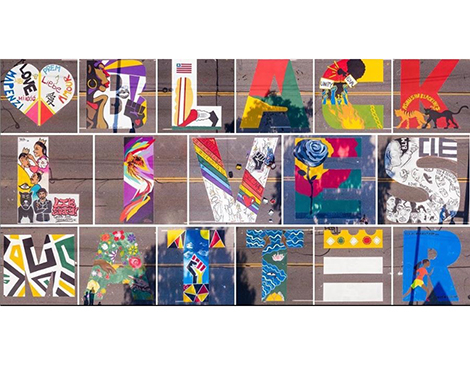 “Going into this community project, I was told putting a BLM mural would be huge deal for this specific area of Cleveland,” Williams wrote on an Instagram post. “This was confirmed when I had several people who lived in the area tell me they lost a loved one to the streets. It made what we did yesterday feel amazing! To know how many people spirits we could uplift through street art and just listening to their stories and saying the names of those that we’ve lost.”

Smith was moved by a message he received from Latasha Dotson, the mother of a 12-year-old boy named Donell King, who was murdered on the street on June 1. King’s name was one of many written across the mural in remembrance of those who have been killed in the area or by the police. “You really lifted my spirits,” Dotson wrote. “It gave me a tiny piece of my heart back.”

“It’s touching knowing that you’re affecting something in that community and in that area,” says Smith. “Just her going down and taking a photo, being emotional about seeing her son’s name in that letter 12 years old...It’s unreal.”

Smith picked the location, off-the-beaten path for some Clevelanders, for a reason. Rather than putting the mural in a popular dining destination such as East Fourth Street or Gordon Square, Smith chose East 93rd to raise awareness about a community plagued with violence, unsolved murders, rapes and kidnappings. As many Clevelanders discover the area for the first time through the mural, Smith hopes to make them aware of the Black lives, most of which have been women, that have been lost in that area.

“I want people to research,” he said. “I want you to Google that area and drive through. I don’t just want it to be a photo op. I don't want it to just be a hashtag. I want you to get in your car and go see the artwork and really know that Black lives truly matter.”

The mural has, however, received criticism from the organization Black Lives Matter Cleveland. A post on its Facebook page criticized the city council for not passing legislation that supports the goals of the Black Lives Matter movement. The group called the mural a “media stunt.” Smith was unaware of the criticism but said the mural would have been painted with or without the council’s help.

“I don't think they ever said, hey, this is what we’re doing for you guys to show that we’re reaching out to Black people,” Smith said. “I was going to just sort of grab some artists and do it rogue, if you will, but people from the city reached out, blocked off the street and gave us the time and the day we needed.

Still, the response has been largely positive from community members. From messages like the one from Dotson to the more than 10,000 people who have liked and shared Smith’s post, the impact of the mural has already gone beyond what he expected. Smith plans to organize two more "Black Lives Matter" murals at undisclosed locations around the city.

“I just thought it was a good way to bring those people out to have their voices heard which, if you think, is literally what “Black lives matter” is about,” Smith says. “Just trying to be heard.”