If you look closely, you can see Orazio Gentileschi’s mind at work. The painter died in 1639, but Marcia Steele, the Cleveland Museum of Art’s senior conservator of paintings, feels close to the artist as she reveals his work by removing prior conservation efforts of his Danaë. As Steele uses cotton swabs and solvents, she discovers the painter’s artistic tricks such as letting a brownish ground or primer layer act as a shadow created by wrinkled sheets. “That’s the beauty of a lot of what we do is to get so intimately involved in how he painted it,” she says. Most restorations can take more than a year. Since June, Steele has been cleaning the painting as people rush by outside the windows, getting from masterpiece A to masterpiece B. She hopes to finish this month. Then she’ll get to work retouching it — which could take up to a year — by carefully filling cracks with reversible conservation paint. Luckily, Gentileschi painted two versions of the Danaë between about 1622 and 1623. One of them was purchased by the J. Paul Getty Museum in January for $30.5 million. Steele will use blown-up photographs of that Danaë as reference when she begins retouching. Still it’s no substitute for the real thing. “I plan to get out [to LA] at some point and take a look myself,” she says. 11150 East Blvd., Cleveland, 216-421-7350, clevelandart.org 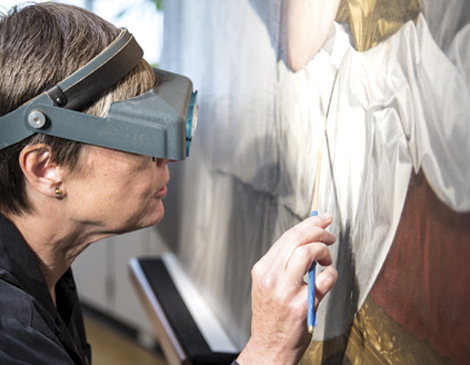 Brite Winter 2020: 5 Things We Saw At The Flats Festival

A reduction in size didn't minimize the enthusiasm for the 11th annual event Saturday night.