His name might not be on the flag, but Lorenzo Carter — not Moses Cleaveland — made Cleveland his home as the city’s first permanent settler. A dark, rustic re-creation of his one-room log cabin home sits like a misplaced relic in the shadow of the Detroit-Superior Bridge — just a bit more than 1,000 feet from its actual location in 1797 at the foot of what’s now St. Clair Avenue. Built in 1976 by the Women’s City Club of Cleveland, the few furnishings in the replica — a hutch cabinet, a cradle and benches and chairs — make the cabin look like it probably did more than 200 years ago. “It was primitive,” says Herman Rueger, former director of the now-defunct River’s Bend Parks Corp. “You have a feeling of the closeness.” Near the corner of Merwin Avenue and West Avenue in the Flats 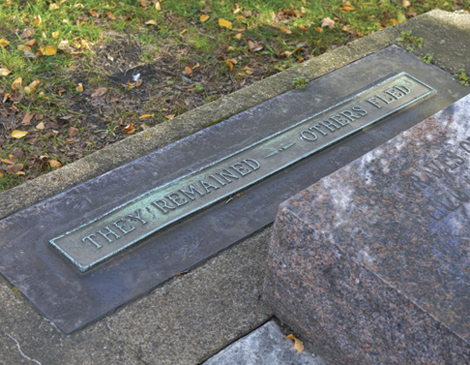 Bonus: About a mile away near the East Ninth Street entrance to Erie Street Cemetery, an inscription on the grave of Lorenzo Carter and his wife, Rebecca, offers up some afterlife shade at Moses Cleaveland. “They remained. Others fled.”