Former Cleveland Magazine editorial assistant Abby Burton was at the Black Lives Matter Cleveland’s George Floyd memorial protest May 30 with her boyfriend Antonio Harper and her mother Alana Burton. Here she shares what she saw and thoughts on how Cleveland can move forward.

We didn’t want to sit and watch anymore.

My boyfriend Antonio wanted to march with his black brothers and sisters, but he also wanted to help people if the protests became violent like we’d seen in the days before. Antonio, my mom and I came prepared with a spray bottle of baking soda and water to help if tear gas was used. Using our white privilege, my mom and I hoped we could amplify the message of the black community and protect them if we could.

We knew going into a heavily crowded area during a pandemic would be dangerous, but we took all of the precautions we could, including wearing masks, carrying hand sanitizer and staying at least six feet away from people when we could. Standing up for the Black Lives Matter movement was just too important. 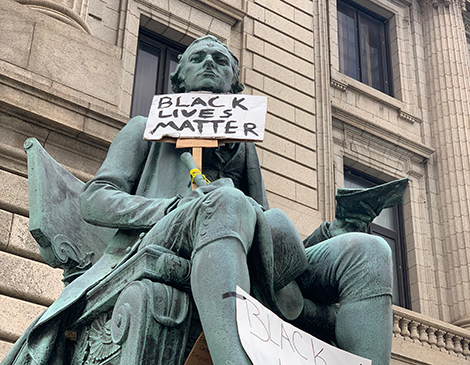 We got there around 2:30 p.m. as the peaceful protest descended upon the Justice Center. Some people were already turning back as officers with riot gear were being sent to stop the crowd. As we got to the front of the crowd, nothing was being thrown. It was peaceful. We saw more police being sent out. More riot gear. As they walked by we witnessed officers pushing protestors who weren’t in their way multiple times. We saw officers smiling. We saw officers tapping their batons on their hands and on objects around them as if telling the crowd to prepare.

That’s when we started to see water bottles being thrown. But the majority of the crowd would plead with the thrower to keep it peaceful.

We walked up closer to the front of the line and saw protesters were upset. They were trying to talk to the officers, to be heard by them. But the officers had no interest in communication. 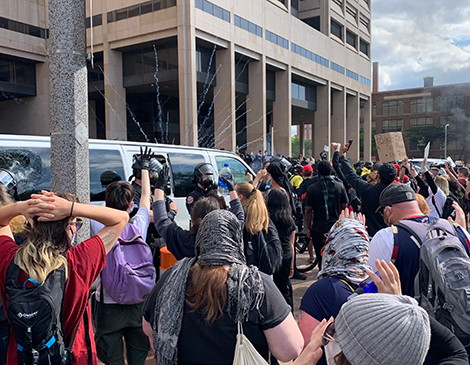 We saw a black man being pulled back by two women. He had tears in his eyes and was trying to talk but the women kept repeating, “your family needs you, your kids need you.” But he kept asking why the police wouldn’t listen to him.

We saw another black man bent over a railing on the steps screaming as he cried. Someone near us said he had lost a family member to police brutality and was afraid to lose more today. Although that was hearsay from another protestor, I could feel the man’s pain.

We were joining in chants such as “black lives matter,” “no justice, no peace” and “hands up, don’t shoot” when we heard the first shot. Our eyes started burning and everyone around us was coughing.

We wanted to run but I saw people in front of me dropping to their knees unable to breathe with tears pouring from their eyes. We ran to them to help. We sprayed as many people as we could. Antonio coached them through it, “don’t rub your eyes, just keep blinking, you will be OK.”

Then the stun grenades started. The first one went off three feet to my left. People ran, fearing for their lives. Before we had a chance to get to a safe space, police started firing directly into crowds. Even crowds that were far away from the Justice Center. 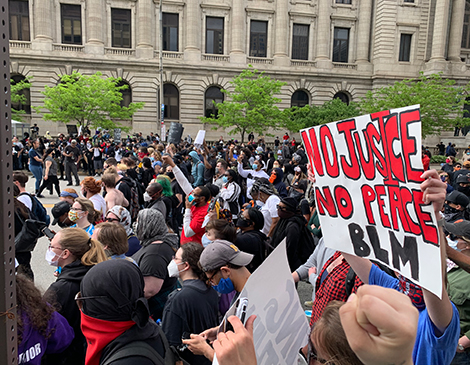 More people were upset. Was this response necessary? Nothing was broken as of yet. Very few things had been thrown. But this was the turning point. I saw hurt, unheard people go back up to the officers. They stood in front of them begging for it to stop while other groups took their frustration out by destroying things. A bus stop was practically torn down, a door to the Justice Center broken in, messages were spray painted on everything. But the majority of people were still peaceful.

The crowd stayed together and chanted. Anyone who was damaging property was running off on their own to do so, but the crowd was still tear gassed.

I don’t know who ran off and started vandalizing Euclid Avenue, but I can tell you they weren’t the Clevelanders who I was standing with peacefully.

Cars started burning, but they were not near the peaceful crowd, but again we got tear gassed for them.

We tried making a barrier of white people to help protect the black protestors but the police just fired tear gas behind us and into them. The stun grenades were going off constantly.

The scariest moment was when a woman fell unconscious and a group of medics pulled her to the edge of the crowd to try to help her. Antonio and I ran over to see if we could help. We, along with three or four others, put our hands up and made a barrier between her and the police so she was safe. An officer locked eyes with us and raised his gun that he was firing tear gas with. We begged him not to shoot, trying to tell him we were protecting a hurt woman but he kept his gun up and walked closer. A man got on his knees yelling that we were simply helping someone but the officer kept his aim on us. Finally, a white protestor ran up to the officer and explained what was going on. He kept aim for a moment before firing into the crowd behind us.

I saw a lot of hurt people. People who just want their people to stop being killed. And I do think Cleveland Police were all too ready to harm.

I do not condone the rioting, vandalism and looting but who are we to tell people how to feel their pain? Are inanimate objects more important than human lives? No.

Many of the protestors who demonstrated Saturday night returned Sunday morning to help clean up our wounded city. These activists prove that the same spirit, passion and frustration that caused them to peacefully gather can also contribute to building a stronger city if they’re given the chance to have their voices heard.

What It Means: Racism Declared A Public Health Crisis

Started by councilman Blaine Griffin, Cleveland City Council's declaration is a first step in dealing with the cities racial inequalities.

From focusing on indie voices to setting up a virtual comic book club, the new Lakewood comic book shop looks to make comics accessible to all.