Kwame Botchway and Oren Baratz seem like an unlikely duo.

Botchway, a program manager at Cleveland Neighborhood Progress, moved from Ghana to Cleveland in 2017 to study at Case Western Reserve University. Baratz, senior vice president of external affairs of the Jewish Federation of Cleveland, has called the city home for 16 years.

But once a month, the two of them hop on Zoom and talk about normal mentor-mentee stuff: leadership, values, ideas. 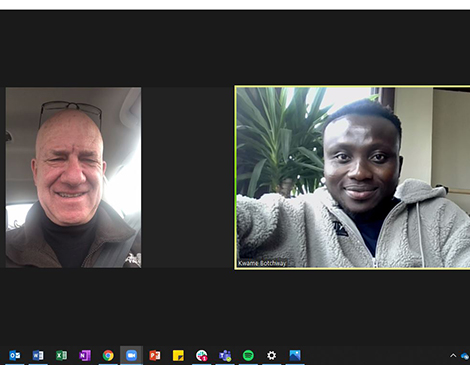 Their monthly chats are thanks to a new Global Cleveland program. Global Rising pairs immigrants within the city with a mentor. Over nine months, each of the 24 participants receive guidance on leadership and professional development skills.

Botchway applied for the program in an effort to make more connections and be part of the city’s growth.

That sentiment is exactly why Global Cleveland president Joe Cimperman wanted to start the program earlier this year.

“To immigrate is an entrepreneurial act,” he says. “Just to come here takes a skill set that requires you to have a lot of savvy. But what so often happens in cities is networks are closed. Our goal is to make Cleveland, Ohio, the most welcoming place in North America in five years.”

After getting an application for the program, Global Cleveland spends hours matching participants and mentors to make sure each is a good fit. And it has been for Baratz and Botchway.

Botchway plans to cook a Ghanian meal for Baratz and his family as soon as they can safely meet in person.

“No matter where I end up, Cleveland would always be my American hometown,” Botchway says. “I’ve made really good friends and meaningful relationships that makes it feel like home.”

10 Cleveland Women Who Inspire Us

Creative Babes Cleveland Founders Are Helping Women Empower Each Other

Gia Paulovich and Alexis Rosen have found a variety of ways to uplift themselves and other women.