Matt Kaulig has worn the same bracelet every day for nearly 15 years.

One side of the rubber band reads LeafFilter, the name of Kaulig’s flagship gutter protection company, which is based in Hudson and now operates in 48 states. The other side reads TNT, which stands for “Today Not Tomorrow.” The mantra nods to Kaulig’s hustle, his meteoric rise and the sense of urgency, not pressure, that he instills in his 142 employees.

“It’s a culture of getting things done,” Kaulig says. “When you’re building a business, it’s all about marketing, so when our team gets up in the morning, all they should be doing is trying to sell LeafFilter until their head hits the pillow.”

The owner of Kaulig Companies  — a single-member family office tackling philanthropy, financial services, marketing and events; sports and entertainment; and consumer home products encompassing brands like LeafFilter, which has 150 offices nationwide — says establishing culture takes constant reminders, hence the bracelets. Kaulig’s morning video meetings, where he gives staff updates and offers glimpses into the life of an executive chairman have also been key to creating a family across 150 offices.

“As we started expanding the business in 2008 with offices in Pittsburgh, Columbus and Toledo, I couldn’t be in the office every day, so the only way they could get to know me was by sending a video by email or text — this was before Zoom,” he says. “ I thought it was important to build culture and know who they're working for and spread the right attitude.” 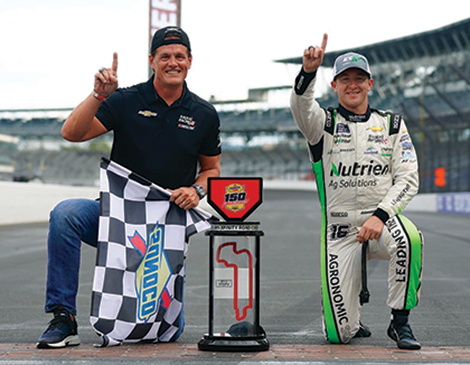 But with the attention that’s surrounded the company in recent months, reminders of success, the fruits of the team’s labor, are everywhere — especially here in Northeast Ohio. In June, a group of investors led by David Blitzer, including Kaulig, bought a 25% ownership share in the Cleveland Guardians. In July, Kaulig Companies signed a deal to take over as title sponsor of the Senior Players Championship and keep the tournament at Akron’s Firestone Country Club through 2023. All this while running the successful Kaulig Racing, a five-driver team that competes in the NASCAR Cup Series and Xfinity Series. Since starting in 2016, the team’s “trophy hunting” philosophy has helped it win 17 races and recent rumors point to further expansion with bigger-name drivers, such as AJ Allmendinger, who was added this month.

Kaulig is a former quarterback, a reliable backup for the Akron Zips from 1992-1995, but he still has all the features of a scout’s dream. He’s tall, about 6-foot-3, with a chiseled jaw, broad shoulders and spiky hair that could withstand a hurricane. But more importantly, he’s magnetic, gliding through his Hudson-based office as a flock of assistants scurries around him.  His employees and assistants praise him and the company’s culture without a hint of an eye roll. A group even cheers when he enters the room for a photo shoot for this magazine.

“It’s all leadership,” he says. “Being a quarterback in college made me comfortable in a leadership role and having people follow you.”

Born to a father who sold brake parts and a mother who worked for Mars brand M&M's, Kaulig was born in Columbus and raised in Cincinnati. The family moved to Chicago when Kaulig was 14, but he returned to Ohio to play ball and to earn a business degree from the University of Akron. There, he met Copley native Lisa Workman, a cheerleader and sorority girl with big hair and a bigger smile.

“You can’t help but look at the cheerleaders on the sidelines, and she was the hottest one,” says Kaulig. 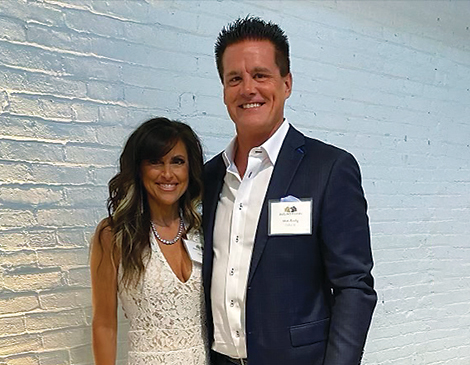 Two years after graduating, in 1998, the couple got married, and Kaulig began working in sales for companies Erie Construction and Mastershield. Then in 2005, he founded LeafFilter, a company whose product promises to end gutter cleaning by using a stainless steel micromesh filter that keeps out everything but water.

Today, financial tickers flash above the maze of cubicles and glass door meeting rooms that make up Kaulig Companies Headquarters, one of a series of open-concept spaces along Georgetown Road. The complex features a multimedia production studio, full kitchen and No. 10 Kaulig Racing stock car, most recently driven by NASCAR’s Landon Cassil.

But 17 years ago, Kaulig led two employees — an installer and a marketer — from his basement office. His cell phone, which is still the same number, was his work line. He worked as a salesman and an administrative assistant, and learned accounting through QuickBooks (which he eventually taught to his father, who joined the company after a few years).

“I literally sold every job, from Mentor to Lorain,” he says. “You just do everything at first, but the great part is then you know every piece of the business.”

As the years went by, Kaulig kept his head down working, rapidly adding employees and offices. One day, when the company had grown to about seven offices, Kaulig and his wife sat on their porch in Stow talking and dreaming. Suddenly, Kaulig had an epiphany: "I think we’re going to be rich," he said. What he really meant was, “I’ve figured this out.” 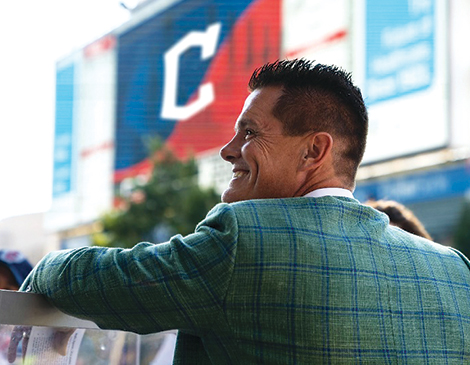 Other goals didn’t come as easy. After six years of trying to get pregnant, the Kauligs turned to In-Vitro Fertilization. After three rounds of IVF, Lisa finally became pregnant with Samantha, now a freshman in high school who participates in band, in 2007. However successful, the process was harrowing and expensive — modern procedures can cost as much as $40,000. It inspired the couple to start Samantha’s Gift of Hope, a charity that offers monetary support to couples in need of an IVF procedure. So far, 16 babies have been born.

The natural progression is indicative of how Kaulig’s philanthropic life, represented by his company’s charitable wing Kaulig Giving, has been inspired by his own experiences and vice-versa. After Samantha spent time in the neonatal intensive care unit upon birth, Kaulig launched a charitable walk for the Akron Children's Hospital's NICU unit. His Akron roots got him involved with the Lebron James Family Foundation, and he heads the NASCAR Foundation’s Speediatrics Fun Day Festival, which raises money for children’s medical and healthcare services. Plenty of rich guys throw money at things, but Kaulig's fingerprints are all over a dozen philanthropic projects.

“We get involved in a big way,” he says. “We teach them how to raise more money and run things like a business. We’re not just writing checks.”

In all, Kaulig has given to more than 100 non-profits. Vice president of philanthropy at Kaulig Companies Stacy Langal, who has worked in non-profits for more than 20 years, including 15 leading the local chapter of the Cystic Fibrosis Foundation, says a businesslike approach to philanthropy makes all the difference for Kaulig Giving. When considering a philanthropic partnership, the company ensures it not only matches the Kaulig mission but also that donation dollars are making a difference — not just funding an exorbitant event budget.

“Lisa and Matt Kaulig want to stay in the space of being uplifting and providing hope and opportunity,” says Langal. “He doesn’t want to just write a check. He loves to be hands-on and see how it’s making an impact on children.”

In fact, his relationship with the Cleveland Guardians started when a call about suite tickets turned into an opportunity to present the annual Giveathon. Since 2018, the partnership has raised more than $1 million for local youth baseball and softball programs.

“We just fell in love with everyone from the ownership to the players to the people working in the ballpark,” he says. “Most of them have been there for years, and they like being there.”

For now, minority ownership doesn’t come with much responsibility beyond charity involvement, though Kaulig jokes that he sets the lineup on a weekend where the bats were slumping. Many fans, who have clamored for the Dolan family to sell the team for years, wish that was true. Kaulig’s Guardians’ buy-in isn’t public information, but minority ownerships typically start at at least $1 million. While Kaulig’s net worth is also not public, that number way above the $5 million you’ll find if you Google it. With a revenue of $1.1 billion in 2020 and 117 offices, his is one of North America’s largest direct-to-consumer home product companies. Minority ownership, however small, is a common pathway to majority ownership, which some have speculated might be Kaulig’s play after his NASCAR success.

“Nope,” he says. “We do it because it’s fun. We want to give people a chance to take a break from their everyday life and have something to cheer for.” 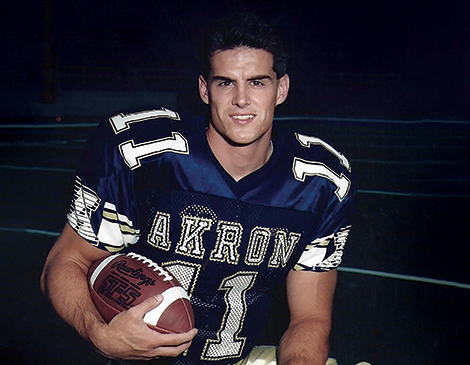 So, no, this Ohio native can't tweak the lineup during an October playoff run. But his money, mind and impulse to give back puts Kaulig in rarefied air for a hometown boy — and that’s something to cheer for.

“We love Cleveland,” he says. “We’ve planted our roots here. And since we're here, we're going to give back to help the community grow. Somebody has to step up and help."

Want more great Northeast Ohio stories? Sign up for our free “In the CLE” newsletter for a weekly Sunday Read and great things to do, arriving in your inbox every Wednesday. Click here to subscribe.