It’s the 1970s in Cleveland. The Cleveland Agora is in its prime, the aftermath of a burning Cuyahoga River is in the air and surrounding suburbs are on the come up. And in Cleveland Public Schools, segregation is still alive and well. That’s when Gregory T. Moore knew it was time to take a stand. A cavalier for change, Moore was born and raised in Cleveland where he attended John F. Kennedy High School and graduated in the class of 1978. After graduation, he attended Ohio University where he knew that the importance of voting rights stretched far beyond the current issues. From then on, he has dedicated his life to the cause of voting rights activism, spending time in Washington D.C. working in voting and civil law before making his way back to Cleveland and returning to OU in 2019 to earn his master’s degree. With voting rights laws in flux around the nation, the local change-maker details his story in his new book, Beyond the Voting Rights Act: The Untold Story of the Struggle to Reform America’s Voter Registration Laws.

Q: What led you down the path of voting rights activism?
A: I graduated in 1978, right before desegregation happened in Cleveland and I was active back then, helping pass school levees and being involved in the transition. Then I got active in voter registration as a student activist on [Ohio University’s] campus, running voter registration drives across the state. I learned a lot about it in early age and started using some of that background and skill to build support for voter registration reforms.

Q: How did your involvement with the Motor Voter Act shape you and the country?
A: We worked over five years on the bill, and it was over the course of the 1988 and 1992 presidential elections. The bill was filibustered the entire time by Republicans, and we were actually trying to push through a bipartisan bill. We didn’t give up. The League of Women’s Voters, the NAACP, labor organizations and faith-based organizations kept meeting over those years and that Motor Voter Coalition is why I was able to work over those five years. It took the election of President Clinton in 1992 before the bill was enacted into law and that became the National Voter Registration Act. 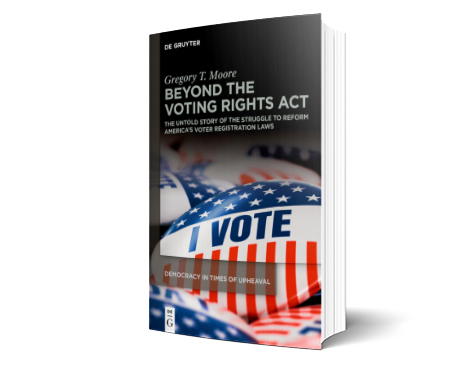 Q: What is the value of voting as a young person?
A: There’s so many issues that affect young people more than anyone else and young people have more at stake than anybody. I was a student activist for a long time, and I still believe that young people can be very decisive in every election. A lot of people get uninspired, and they don’t vote in some of the elections, especially in Cleveland. We got 18% in the last primary, so it’s well over 80% of people not voting and that is a bad thing.

Q: What do you hope to see for the future of voting in America?
A: A more engaged electorate that stays involved, not just during presidential elections but during local elections. It involves more than just voting, it’s showing up at city council or going down to Columbus and showing up at a hearing. It takes people staying vigilant and engaged, writing letters to the editor, writing letters to your council members, sending a tweet, an email, showing up.  The important part of keeping our democracy healthy is strengthening it.