The truth is out there — at least Small Town Monsters think so. The documentary film crew, led by Wadsworth’s Seth Breedlove, have investigated unexplained occurrences in small towns across the country, where tales of Bigfoot, Mothman and other creatures have been passed down through generations. “Stories like this offer an escape in our own community,” says Breedlove, who’s directed 10 documentaries and two miniseries with the crew. “In a lot of these stories, no one was ever actually able to figure out what was at the root of what happened.” On March 21, Small Town Monsters hosts a fifth anniversary screening of their first documentary film, 2015’s Minerva Monster, at the Canton Palace Theater, where they’ll also premiere a new miniseries, On The Trail of UFOs. Here are three things to know about the group’s investigations. 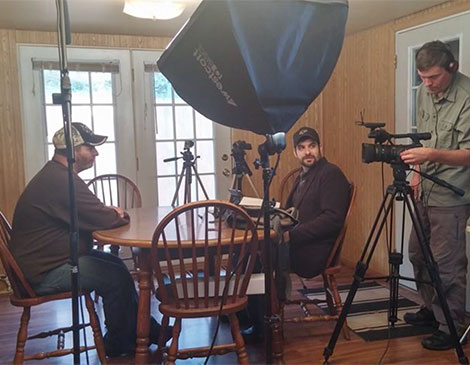 Minerva Madness
In 1978, a Minerva family sparked national attention when they reported numerous sightings of a hairy, upright creature stalking the grounds behind their home. Bigfoot researchers combed the woods for hair samples and local police bought Army-issued Jeeps to investigate the area. In 2014, the family spoke about their experiences on-camera for the first time for Minerva Monster. “In a lot of these towns, these events are the biggest thing that ever happened,” Breedlove says.

Alien Territory
To create the eight-episode series On The Trail of UFOs, Small Town Monsters interviewed 29 people across 16 states about UFO sightings and encounters. Last summer, they even trekked to Area 51 after news broke UFO fanatics planned to storm the military base. They share their experiences in a post-screening Q&A March 21. “We’ve never had people in power taking it as seriously as they seem to be now,” says Breedlove. “Every day, there’s some new mainstream news story about UFO sightings.”

Barberton Calling
In the series’ first episode, Breedlove interviews a man who, as a child, allegedly saw a UFO fly over Barberton and land in a dense, wooded thicket. “On the surface, it’s kind of a mundane sighting event, but you have four different witnesses: him, his sisters and a guy who was jogging. They all corroborated each other’s stories,” Breedlove says. “He was just a kid, but he still talks about this all the time.”