Luxurious gold, silver, gemstones and ivory from Europe and Africa converge in Medieval Treasures from Munster Cathedral, a visiting exhibition running from May 22-Aug. 14 at the Cleveland Museum of Art. The Middle Age treasures allow those who look upon them to be transported as far back as the year 1000 to Saint Paul’s Cathedral in Munster, Germany.

Kept safe at the heart of the cathedral for centuries before coming to Cleveland, pieces in the collection include reliquaries with silver- and gold-plated wooden containers that once held significant religious artifacts, such as the bones of saints. Gerhard Lutz, Robert P. Bergman curator of medieval art at the Cleveland Museum of Art, highlights three unique pieces in the collection.

This meticulously detailed, partially gilded likeness of the prophet Hosea created around 1380-1400 was to be viewed, kept on display at all times on the high altar along with busts of other prophets. Although it’s a mystery why the lesser-known prophet was displayed on the altar, this reliquary has a clear rock crystal in the center through which visitors can see the relic inside. “This is a dramatic shift compared to the time in the 11th century,” says Lutz. “Usually, you can see it’s a very precious object, but you don’t know anything about what’s kept inside.” 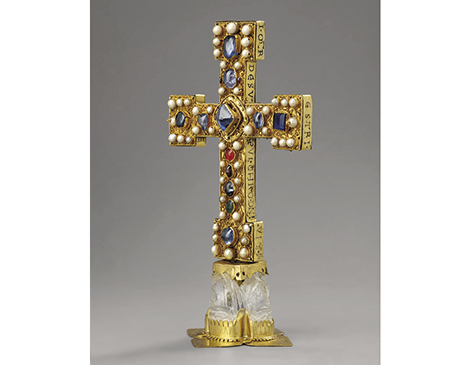 Elaborate and ornate with its many pearls and rock crystal mounting, this reliquary created around 1050-1100 is most likely one of the oldest pieces in the Munster Cathedral treasury. An object this invaluable would likely be hidden away where it would be safe and brought out on special holidays. Such treasures adorned with precious gemstones like this are typical of the time period and exceptionally dazzling to see in shining light. “When you think of the church at the time, with candlelight, this must have been an overwhelming impression for the people going to the church,” says Lutz. 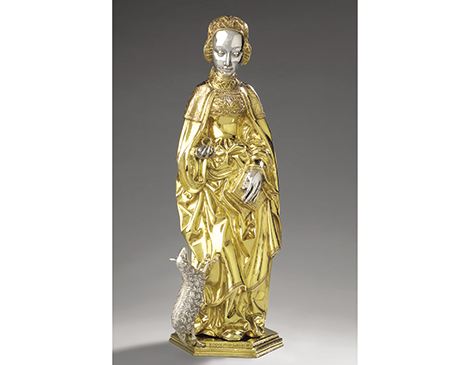 The intricate gold details of this Saint Agnes figurine are extra valuable: made mostly of silver due to its availability around 1520, a thin layer of gold is plated over the statuette. When determining the function of this particular reliquary in likeness of the patron saint of virgins, Lutz presumes the statuette was used in processions and viewed from all sides as artists of the time only worked on what would be seen. “The hair would be just very flat, and only superficially worked out, but here, everything is very finely made even on the backside,” says Lutz.

This fall, Cleveland joined Rome, Italy, as the only cities to hold all six pieces of the collection.