When Velvet Tango Room opened 25 years ago, craft cocktails were so rare most folks didn’t even know what a Moscow Mule was. Today, thanks in part to the influence of the trailblazing Duck Island cocktail lounge, nearly every corner bar has some version of a craft cocktail on its menu. No one does a handcrafted Sazerac or French 75 quite like Velvet Tango Room though, so when the beloved Cleveland institution went up for sale, local cocktail lovers held their collective breath that they wouldn’t lose it to a new concept or worse: development. After more than three years of searching for the right buyer, founder Paulius Nasvytis sold it to Ron Leonhardt Jr. in February. “Part of our handshake over a couple vodka drinks was more or less that I will keep it the exact same,” says Leonhardt. Here’s the lowdown on who Leonhardt is and his plans for Velvet Tango Room.

He’s a longtime patron of Velvet Tango Room. Leonhardt has been a regular at the lounge for years (his favorite drink is the hand-shaken Hemingway Daiquiri, made with egg whites, fresh lime juice, simple syrup and rum), and was in talks with Nasvytis about buying it for nearly two years. After the price was lowered (the selling price has not been disclosed), Leonhardt, who also is president and CEO of CrossCountry Mortgage, pounced. “It’s got a great atmosphere, it’s relaxing, and it’s got great drinks,” he says. “That’s why I fell in love with it and I think a lot of people who go there feel the same way. There’s a very loyal following.” 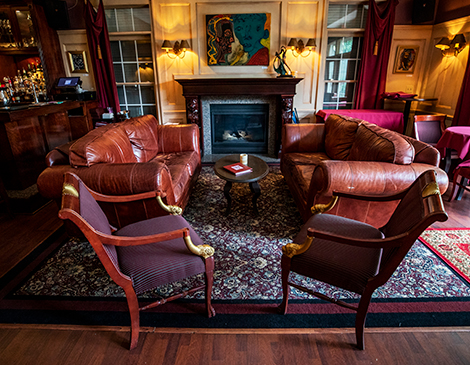 He’s a Velvet Tango Room preservationist. Clevelanders can breathe easier — the cozy, upscale aesthetic and handmade cocktails you love will remain as is. One of the informal conditions of the sale was that Leonhardt wouldn’t change anything. Even the staff and management, who stuck with the bar through a yearlong pandemic closure, came with it. “We’ve really done nothing to it except we cleaned up the patio a little bit and put a fresh coat of paint on it,” says Leonhardt. “Nothing else has changed and nothing will change as long as I’m involved in it.”

He’s not new to the restaurant and bar scene. Under the name Sly Restaurant Group, Leonhardt and his business partner Pat D’Onofrio are also partners in Slyman’s and Slyman’s Tavern and Thirsty Dog Brewing Co., as well as Dante Boccuzzi’s Dante’s Inferno and sushi restaurant, Goma, which is opening this summer on East Fourth Street in the old Chinato space. The goal is to acquire well-loved Cleveland staples and maintain their originality. “They’re iconic brands,” Leonhardt says. “You’ve got Slyman’s, you’ve got Velvet Tango Room. I can’t really think of more places that just scream Cleveland than those two.”