William Johnson, the East Cleveland rapper better known as Pooh Gutta, first whipped up his Gusto Sweet & Spicy Sauce, a tangy and sweet mishmash of condiments, while playing around in his grandma Eva’s kitchen when he was 10.

“I always got in trouble for making it,” he laughs. “She would say, ‘Stop using all my condiments! Only one condiment per item!’ ”

Johnson won’t reveal what ingredients go into the sauce, but these days it’s a staple on the menu at his first restaurant, Gusto’s Seafood & Chicken, which opened its doors in August. 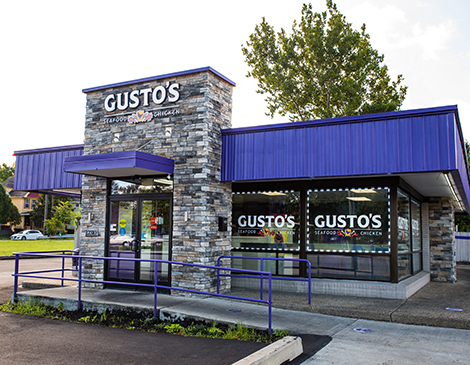 Pairing their business acumen with Johnson’s reputation and vision, they opened Gusto’s not far from the same East Cleveland neighborhood where he grew up.

“My whole upbringing was on restaurants like Hot Sauce Williams and Peter Pan’s,” says Johnson. “We don’t have those anymore, and I wanted to bring that back to the community — urban food that people can’t really tap into right now.”

Johnson envisioned an affordable menu of chicken wings and seafood, which he says isn’t as common in East Cleveland.

“In this neighborhood, people can’t afford things like lobster tails,” he says. “People don’t even know where to get that from.”

And at Gusto’s, seafood sings. Customers can order their lobster tails both pan-seared and fried with sides such as crispy hush puppies, creamy coleslaw and spicy jambalaya. Lobster is one of many proteins available in Gusto’s boil baskets, alongside options such as fried king crab, shrimp and crawfish. And although Johnson recommends the Gusto Sweet & Spicy Sauce, the slightly sweet house butter is a popular second.

Johnson came up with most of the menu, testing out his recipes on his family and friends, including his girlfriend, his grandma and his fellow congregation from Starlight Baptist Church at block parties and neighborhood cookouts.

“I made fans on the street, so I started making it bigger,” he says.

Now, Gusto’s is a family affair. His uncle Vincent Johnson is head chef and his grandma is one of his most frequent customers, calling every day to order a shrimp dinner.

“Someone just started Popeye’s in 1972. That’s not too long ago,” he says. “Who’s to say that 50 years from now, somebody in my family’s not going to be running Gusto’s as a franchise?”