It’s like having dessert for breakfast. From a classic glaze to the more trendy maple bacon, doughnuts have been a fixture in our lives — a treat on cold weekend mornings or an enticement for sitting through long Monday meetings. To tap into the nostalgia those fry cakes bring, Jack Frost Donuts owner Fred Borkey Jr. builds his 200-plus creations on a tasty tradition. “Our dough, we don’t mess with,” he says. “It’s the same since 1937.” But he’s willing to experiment with the decadent creams and icings that top the towering treats and add fun sugary ingredients such as Oreos, Reese’s Puffs and Skittles. “From childhood to adulthood there is just something about a good doughnut that brings a smile to your face,” he says. 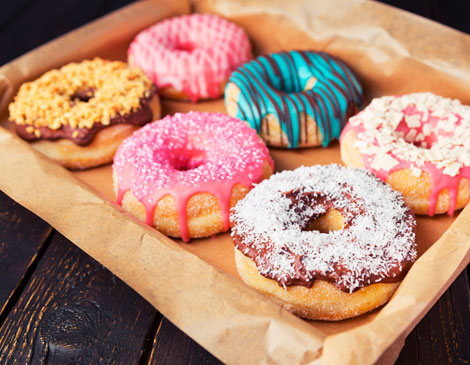 Ingredients: Flour, baking powder, sugar, eggs, milk, vegetable oil and salt Technique: Roll out dough and cut into circles. “Fry them in a deep fryer at 380 degrees,” Becker says. “Depending on what the recipe is and how things are, it will take about 50 seconds per side.” Pros: With no time spent waiting for the dough to rise, you can dig in sooner. “After mixing it, you let it sit for maybe 10 minutes and then you can use it. So it’s a lot quicker.”

Ingredients: Flour, eggs, sugar, salt, yeast, shortening and margarine Technique: Mix ingredients together and then let rise for 45 minutes. Cut into circles and let them rise again. “That is another 45 minutes,” he says. Pros: Picky eaters should go with the yeast doughnuts. “You have a little more options with them,” he says. “You can fill them, you can make cinnamon rolls out of them — there’s more things you can do with that dough.” 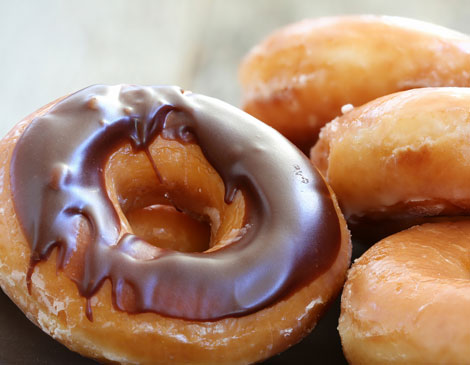 George Vadaj, owner of George’s Donuts in Twinsburg, shows us how to adorn our doughnuts with some sweetness.

“We typically apply the vanilla glaze while the doughnut is still hot,” Vadaj says. “The glazing sugar, which you can buy at a baker supplier, can handle the heat without melting.”

“It’s just like mixing up pancake batter,” he says. “Mix the sugar and hot water into a bowl. Keep adding a little hot water until it’s the consistency you want. Then add the cocoa.”

“A lot of the flavoring is up to the individual — what taste they like,” he says. “Some guys like a real dark maple. The color will tell you how strong the flavor is. Others want it lighter, so they should cut back a bit.” 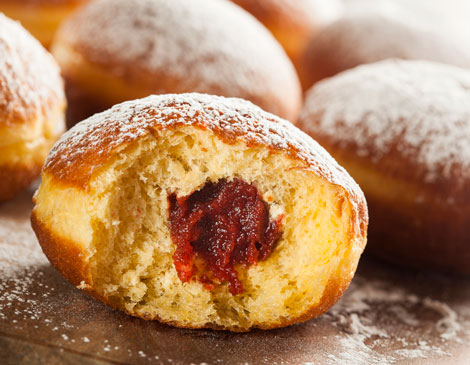 Step up your doughnut game with this expert move from Donut Land’s Bill Rienerth Jr.

Following in the sugary footsteps of his father, Bill Rienerth Jr. has stuffed a doughnut or two in his life with jelly or buttercream. Rienerth says a yeast doughnut works better than its cake counterpart because it’s less dense and can hold a filling better. After letting the doughnut cool, roll it in powdered sugar. Then fill a plastic pastry syringe or a pastry bag with your filling and insert the tip halfway into the doughnut. Work slowly until you gain experience, he says. “You get a feeling for the amount when you do it all the time,” he says. “As an amateur, watch for the sides of the doughnuts to puff out a little bit.” Don’t worry about covering the opening, Rienerth says, it’s a good indicator of the doughnut’s flavor.