Lines were out the door when The Botanist opened for business Jan. 16. As Northeast Ohio’s first dispensary, it has the sleek, minimalist look of an Apple store.

“This is many of our Ohio patients’ first time in a dispensary,” says CEO David Neundorfer, whose Greenleaf Apothecaries owns The Botanist, which now has locations in Canton, Wickliffe and Cleveland. “Clearly, they’ve been waiting anxiously.”

But don’t roll one up yet. The Ohio Medical Marijuana Control Program is much stricter than programs in states such as California. Only plant material has been OK’d and it must be consumed via vaporizer. Smoking a joint is illegal. Approval for  edibles, extracts for vaping and transdermal creams and patches have rolled out slower than expected, with only one of 30 processors gaining approval by March.

Many elderly and terminal patients were dismayed by the program’s 18-month delay and ongoing wait for simple-to-use products. Dr. Daniel Neides of Beachwood’s Inspire Wellness, which can recommend cannabis to patients, says the program “over-promised and under-delivered.” Still, reduced tremors, muscle spasms and anxiety in Alzheimer’s, Parkinson’s and MS patients excites the doctor.

“These aren’t 25-year-olds looking to get high,” says Neides. “These are people with legitimate medical problems looking for an alternative to pharmaceuticals.”

While the day Ohioans can legally enjoy THC-infused buckeyes after yoga may be awhile off, one thing seems certain: the future of Ohio is green. 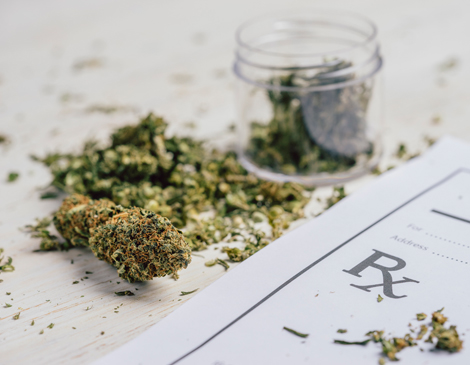 Card Carrier: Two professionals explain how to get registered and treated with medical marijuana in Ohio.

Step 1: Qualify For Treatment.
If you have PTSD, Alzheimer’s or one of 19 other accepted ailments, obtain medical records or a doctor’s referral letter stating your condition.

Step 2: Find a Doctor.
Avoid using “Google University” to find the closest doctor with a certificate to recommend, Neides says. “For us, it’s not an in-and-out appointment,” says the former Cleveland Clinic practitioner. “Who are you actually going to see? What are their qualifications, and what can they do for you beyond just cannabis?” Not covered by insurance, treatment at Inspire Wellness costs $249 per year.

Step 3: Register with The State.
With the doctor’s recommendation, complete the Patient Registry web form and pay the annual $50 fee. A Patient and Caregiver Registry Card is issued digitally and can be printed or presented from your phone at the dispensary, like a driver’s license at a liquor store.

Step 4: Find what’s right for you.
Registration and consultation is just the start. Finding the right medicine takes trial and error. “The patient experience includes consultations with our designated representatives,” says Greenleaf Apothecaries CEO David Neundorfer. “They have deep medical backgrounds and are there to support patients — not just with medical cannabis, but also how it interrelates with their other health regimens.”

Sativa
Often used to treat patients with chronic pain, glaucoma and nausea, these strains are uplifting and create euphoria. “Sativas typically produce more of a cerebral sensation — a head high,” says Nelson. “They have more energizing effects for daytime medicating.”

Indica
This strain’s sedative effects are often useful for managing stress, boosting mood and fighting sleep disorders in patients with multiple sclerosis, Parkinson’s disease and epilepsy. “Indicas have more of a full-body sensation and are used for relaxation or winding down,” says Nelson.

Pro Tips: Go further by asking about each strain’s “entourage effect,” or how terpenes, cannabinoids and more work together. And when it comes to THC, the psychoactive compound, start with less than 12 percent, Nelson says.

Weed Count: Here are some key numbers collected by the Ohio Medical Marijuana Control Program to measure its economic and social impact.

24,556: Patients registered to purchase marijuana
10,000: Patients registered for chronic pain, the most common ailment (as of March 11)
13: Dispensaries approved for operation out of 56 licensed by the state
$2.9 Million: Gross marijuana sales since Jan. 16 program launch
382: Pounds sold as of 4/1