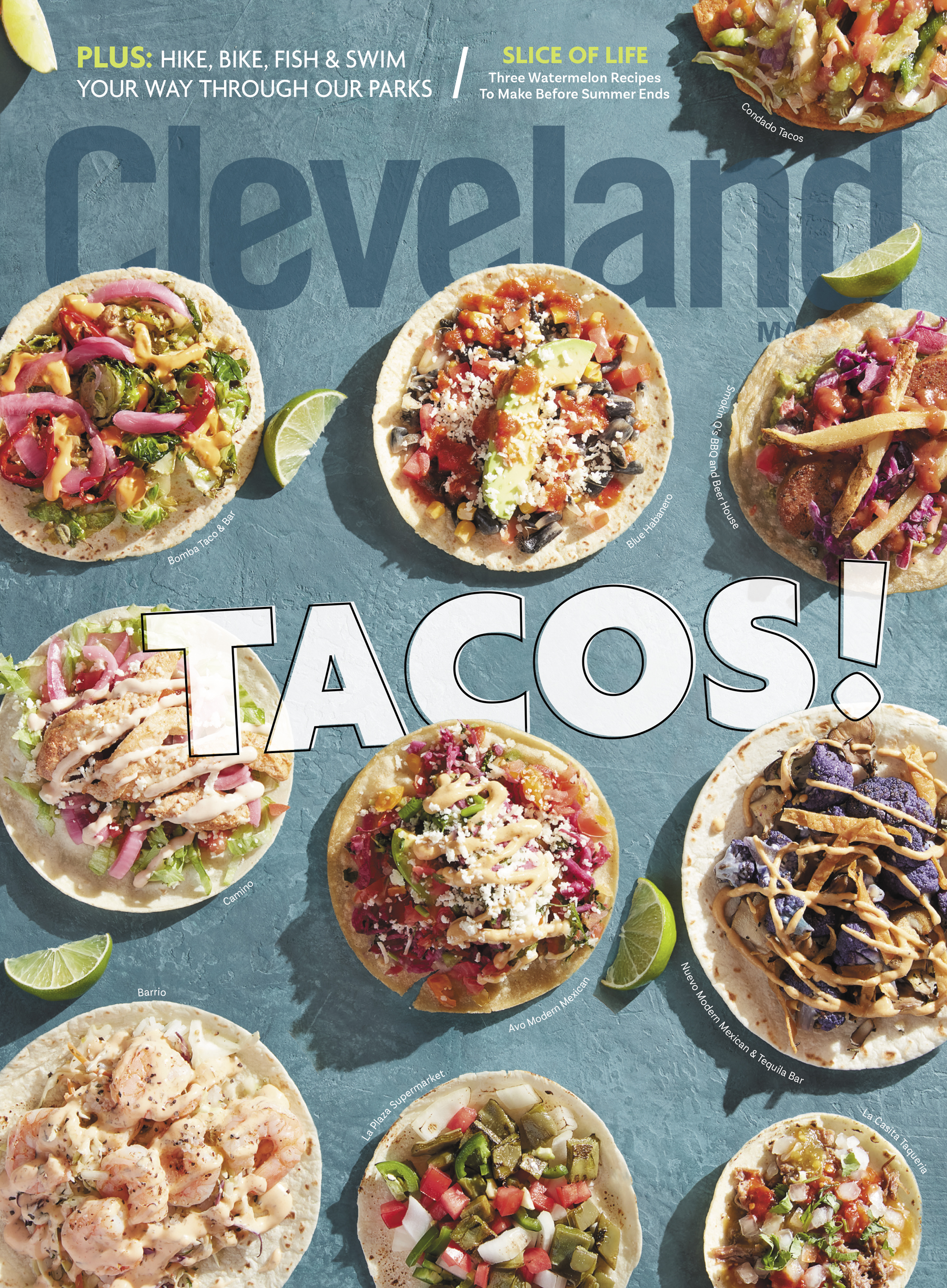 There's a taco revolution in Cleveland. From Mexican classics to overstuffed options, modern American to even vegan and vegetarian tacos, there's more than enough of these handheld beauties to go around. Plus, our favorite salsas and when to use corn or flour tortillas.

Best Things We Ate This Month: Heart Of Gold, Butcher And The Brewer, Mashiso Asian Grille And Teriyaki Express

The five-course meal hosted at outdoor venues such as farms and fields highlights ingredients from local farmers.

Tacos are one of the most popular foods in the country — and for good reason. With so many different types of tacos out there, here's our guide of what to know before you go looking for your new favorite taco.

The fruit's neutral flavor lets the other elements shine in this house-made treat at the Ohio City Taqueria.

This Sandusky taco spot's combination of juicy lobster pieces and Mexican spices will turn your taste buds on their head — in a good way.

One of Barrio's El Jefe selections, the camorone agrietado tacos, featuring poached shrimp, are built for summer with a spicy kick and a refreshing finish.

A peppery chimichurri adds zest to this seafood-based taco at the North Olmsted spot.

The owner, who first got into tacos by adding tacos to Paladar Latin Kitchen's menu as a fun option, now owns Bomba Tacos & Bar.

Despite only being on the menu for less than four months, the Smokin' Brussels taco has already become one of Bomba's biggest sellers.

One of seven original tacos at the Warehouse District spot, beer-marinated chicken sits on a house-made corn tortilla.

With beef tongue that's cooked for three hours, this taco is the perfect mixture of lengua, cilantro, onion and salsa.

There's a taco revolution in Cleveland. From Mexican classics to overstuffed options, modern American to even vegan and vegetarian tacos, there's more than enough of these handheld beauties to go around. Plus, our favorite salsas and when to use corn or flour tortillas.

The regional chain uses simple ingredients to create a new flavor experience with this chicken-based taco.

Cleveland Taco Guide: Corn Or Flour? Our Guide For Picking The Best Tortilla

The choice between a corn and flour tortilla shouldn't be an afterthought — it makes or breaks your taco.

This Painesville taco is a crunchy and chewy representation of authentic street food.

For the past decade, owner Joshua Sias has been obsessed with creating the perfect taco recipe. He very well might have done it with the Bangkok tacos.

Owner Juan Vergara's beef birria taco is his take on the classic, which is a Mexican staple at events such as birthdays, weddings and holiday gatherings.

The ever-expanding Latin- and Los Angeles-inspired restaurant group, which started in 2019, features a menu filled with unique and flavorful dishes.

Since opening his restaurant in 2009, the owner is the place for locals looking for tacos, quesadillas, tortas and more in Painesville.

The Lakewood restaurant and supermarket is the place to go for delicious, authentic tacos filled with barbacoa, lengua and more.

Growing up, the owner couldn't get enough of his mother's cactus recipes — so much so he made the "prickly pear" the main ingredient of his vegan tacos.

After being born and raised in California, Mamacita's owner Monica Hally brings out her background in West Coast flavor in the Baja beer tacos.

The owner of the Ohio City spot has built his restaurant around trying to capture the flavor of Mexico in a way Clevelanders will like.

With a recipe that's been unchanged since 2006, the Ohio City restaurant's machaca taquitos are a Cleveland staple.

Originally a sandwich, owner Samuel Lavictoire decided to try his banh mi recipe as a taco. Spoiler alert: it worked.

With a flavorful maitake mushroom base and a vegan queso, this multicultural dish is the perfect meatless taco.

The Senor Tequila team uses patience and precision when adding spice and flavor to the meat.

With red cabbage and French fries piled high on top of a base of jalapeno hot-link sausages, this taco combines the best of Polish and Mexican cuisines.

Head chef and owner John-Paul Farah's breakfast tacos are stuffed to the brim with all your favorite breakfast tastes.

After starting out as a burrito, Taco Tontos' chefs turned the recipe into a two-layer taco — which has since turned into a menu mainstay.

Combined with sweet mango salsa, lettuce and shredded cheese, this fresh seafood taco is perfect for a beach day.

Pineapple, cilantro and Sriracha work perfectly with teriyaki-marinated grilled chicken in this Japanese and Mexican mashup.

The carnitas at this Cleveland spot are cooked with Modelo Negra beer, orange juice, Mexican Coca-Cola and a pinch of tequila.

The team at this Tremont restaurant take a French approach to preparing the taco, with each one taking four days to prepare to ensure the meat is as soft and tender as possible.

Local salsas from Willy's Fresh Salsa, Sidekicks Salsa and Gourmet Firehouse Salsa are the perfect complement for any taco.

Cleveland Taco Guide: Zocalo Tequileria's Beyond Tacos Are The Vegan Tacos Of Your Dreams

With ground Beyond Meat, veggies and a zingy chimichurri sauce, this vegan taco eats like a full meal.

With taco shells flavored from juice from the meat, these tacos in Painesville give each patron a fresh and unique experience.

The new carryout and drive-thru restaurant's campfire sticky buns are nostalgic and sweet.

With less than a month until the dog show, members of the Chagrin Valley Hunt Club prepared their English foxhounds for competition.

The local greeting card company and the entertainment leader are collaborating on Celebrity SmashUps, personalized e-cards.

Nine-year-old Brownie Scout Elizabeth Costanzo was given the Girl Scout Medal of Honor after saving a family friend.

One writer is on a mission to put her grandmother's favorite saucepan to use.

With The Delta Variant Looming, The Pandemic May Leave Music Venues Reeling For Years

As part of the Save Our Stages Act, nearly $100 million has flowed into Northeast's theaters and entertainment venues. Still, many local venues say it'll take five years or more to recover from the affects of the pandemic shutdown.

With art that depicted everything from drawings of people he met to vibrant cityscapes, the painter depicted the pulse of Cleveland in his work.

A performance from the Cleveland Public Theatre’s Student Theatre Enrichment Program kicks off this year's Arts in August festival, a monthlong celebration of the arts.

The self-published comic features a fantasy world filled with high-tech gadgetry and witches.

With its 20th anniversary celebration on the horizon, the Ohio Shakespeare Festival pulls out all the stops for this year's performance of A Midsummer Night's Dream.

A Clevelander's Guide To A More Sustainable Home

Rachel Regula, owner of Little Spark Refill Shop in Rocky River, gives us tips for getting into a green routine at home. Plus, how to get into composting.

Painting 101: Tips For A Seamless Job

From sanding to cleanup, Jason Santee, owner of VertexPro in Mentor, gives us three tips for tackling your next paint job.

With a playful design and eclectic art, this home by Ashleigh Clark Interior Design Group is full of youthful touches.

Get Outside: A Guide To Northeast Ohio's Park Systems

Whether you're looking for trails, lakes or campsites, the Cleveland Metroparks, Cuyahoga Valley National Park, Summit County Metro Parks and more have plenty of options.

With agility ramps, a splash pad and cocktail bar for owners, this new Tremont dog park has it all.

Whether it's Hakwen's internship program or the Cleveland Metroparks hands-on STEM programs, area schools and organizations are doing their part to foster a culture of diversity in STEM.