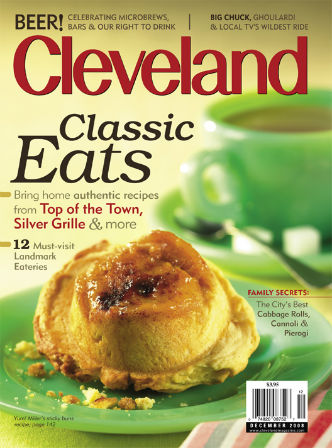 Cult of the Holiday Brew

‘Christmas Ale!’ demand the thirsty hordes who descend upon Great Lakes Brewing Co., and any local store with a cooler, in their annual search for cinnamon-spiced winter bliss.

Head of the Glass

How To | Open a beer without an opener

How To | Pour a Beer

How To: Make Chicken Broth from Scratch

To go with Sandy Zelman’s matzo ball recipe, featured in the Dec. 2009 issue of Cleveland Magazine

The old sign still hangs outside this Ohio City landmark that served an unforgettable Wiener schnitzel and provided its patrons a place to reconnect with the old neighborhood.

Admit it, those sticky buns on those silver trays are what you miss most about this Lakewood restaurant.

St. Andrew Ukranian Catholic church in Parma produces pierogi by the hundreds of dozens. After sharing the secret of its potato-filled pierogi in our December feature story about classic Cleveland eats, the church also told us how to produce some of its o

Down Under Tries to Kick Kangaroo Label

Skee ball, a G-man, Erin Brew —if only the joint were still around

The Rant - Do women need fruit to drink beer? No!

Hused inside Higbee’s, the Silver Grille was a holiday-season dining destination that grew into a Cleveland icon.
Today, nearly two decades after closing its doors, former patrons still talk about the Welsh rarebit on its menu.

Top of the Town

There was a time when men always wore suits and sauerkraut balls were considered a fancy appetizer.
Stouffer’s Top of the Town was born of this era and became a downtown dining icon that lasted more than three decades.

Fifty inflatables will adorn the Onofrey family’s home this year.

Life According to 'Big Chuck'

Memories in a Can

With skating championships coming to town, our writer returns to the rink and recalls a childhood spent on the ice.

Why is the house where Superman was born not a well-known Cleveland landmark? Author Brad Meltzer wondered the same thing. Then, he helped make sure Jerry Siegel’s childhood home will be preserved for future comic book fans.

Jim Brickman has sold millions of CDs, sang a duet with Kermit the Frog and toured with Donny Osmond. This month, the Shaker Heights native comes home for a Dec. 26 holiday concert at Severance Hall.

An unconventional Christmas album and a film debut show a different side of Sarah.

Inspired by everything from Lake Erie to the Grand Canyon, Cleveland Heights’ poets laureate Meredith Holmes, Mary Weems and Loren Weiss share some of their poems included in the new anthology Awake at the End.

An Eye for Fashion

Retirement: It's not just a fairy tale

Sure the economy’s Grimm. But that doesn’t mean you can’t live happily ever after.  Follow our experts’ advice, and all your retirement dreams could come true.

Stay Fit as a Family

With a new year on the horizon, now is the time to start thinking about committing to a healthier 2009. (And if you’re anything like us, you could probably use a little inspiration.) So we turned to our medical community and asked leading minds i

Work to Get Your Life Back