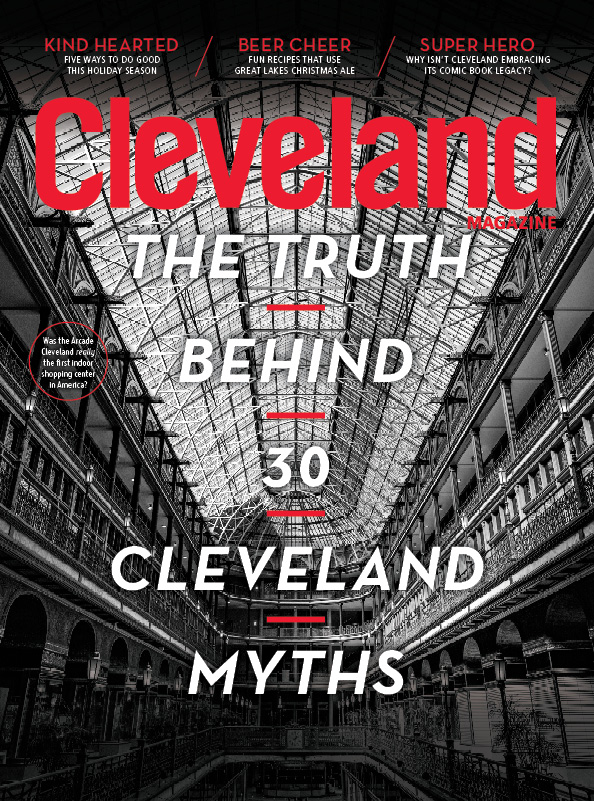 We explore — and attempt to bust — 30 myths, rumors and legends of The Land.

5 Baklava Takes That Sweeten You Up

There's more than what meets the eye with these desserts from Aladdin's Eatery, Anatolia Cafe, Astoria Cafe & Market and more.

A Dish We Love: The Original Cheesesteak

The Original Steaks and Hoagies serves up a hearty hoagie.

Each bowl of soup from the Payne Avenue restaurant is served at a boiling 300 degrees.

How To Cook With Great Lakes Christmas Ale

Christmas Ale doesn't have to be relegated to a one-time pint. Tap into a new holiday tradition with these four recipes.

Paul Mendolera does best when rooting his Chardon restaurant in small-town culture and locally sourced ingredients.

Seafood Boils Bubble Up In Cleveland

We pick our favorite sauces at The Boiler 65, The Sauce and Seafood Shake.

The Ohio-based company gets its first Northeast Ohio outpost.

Three Peppermint Dishes To Indulge In This Season

Skip the milk and cookies, these desserts are a sweet deal.

We explore — and attempt to bust — 30 myths, rumors and legends of The Land.

Did the mob boss use an underground tunnel to get to Little Italy?

The Arcade Cleveland is grand, but is it the first indoor shopping center in America?

Mayfield is prickly, but did he really snub the 49ers' Richard Sherman?

Did the Browns really fire one of the greatest NFL coaches of all time?

We'll always be champs, but were there 1.3 million people at the parade?

Is the Tribe's name based on a former Cleveland Spiders player?

Was the lakefront home to the Browns and Tribe built to attract the 1932 Olympics?

Is the terrifyingly named turn really that dangerous?

Is the 1824-built former home and tavern the oldest building in Cleveland?

Are the bullet holes in the bar at Great Lakes Brewing Co. from the law man?

Turns out the history of traffic lights is a little tricky, but was the first one installed in Cleveland?

Could the Cleveland Indians have had all three legendary players?

We've all heard the stories, but is Franklin Castle's hauntings the result of foul play?

Is geography and Lake Erie all to blame for the East Side getting more snow?

There have been many claimed South Bay Bessie sightings, but does the monster really exist?

Was the building (now the AT&T building) the inspiration for Superman's Daily Planet?

CLE Myths: Ohio City Was Its Own City

Does our East/West divide go back to the fact that Ohio City was once it's own city?

Does Ohio really only have man-made lakes?

From Kirtland's Melon Heads to West Side Market hauntings, we love a good creepy story.

Did the Bay Village doctor inspire the Fugitive TV show?

Is Cleveland really as suburban as we think?

We love American Greetings, but did they create the October holiday?

CLE Myths: The "A" In Cleaveland

We've all heard the masthead theory, but when did we really become Cleveland?

Did Dave Voelker really walk across a frozen Lake Erie in 1978?

Cleveland's 2019 Was Really Something

Two editors fire off takes on some of the buzziest stories from the last year.

Editor Kim Schneider writes about how our December issue gets you in the holiday spirit.

The Michael Louis Palumbo Jr. Act gives firefighters access to workers' compensation in cancer cases. But cities are contesting first-responders' claims. Euclid firefighter Dave Rowell and others are fighting back.

Superman was born here, yet many Clevelanders still don't know it.

The Cleveland native hits the stage at State Theatre Dec. 7.

This romance novel publisher fills a hole in the literature landscape by publishing romance novels about people of color and more.

Crowns: Crossing Into Motherhood at Canton Museum of Art explores the intersection between mother and artist.

The West Side emo punks pair serious chops with a jokester online persona.

We break down the behind-the-scenes details on the Akron songwriter's winning "Nostalgic Candy" clip.

There's a lot of shiny new things at the revamped arena, but these new art works are making us stop and stare.

The zine company, out of a studio/event space on Madison Avenue in the Cudell neighborhood, believes, like us, that print is still good.

Put that old newspaper down and follow these step-by-step guides from local shops to get creative with your gift-wrapping.

Embrace the Holidays At These Christmas Events

Find The Perfect Cleveland Volunteer Option For You

From foodies to musicians to sports fanatics, we've got a volunteer opportunity that will make the season of giving last all year long.

Light Up Your Life With These Three Tree Lighting Ceremonies

The holiday season is just beginning.

Three Holiday Productions With A Twist

The Hip-Hop Nutcracker, Xmas Cuento Remix and A Die Hard Musical Parody are quirky takes on the classic holiday.

Go big and stay home -- you've earned it this year.