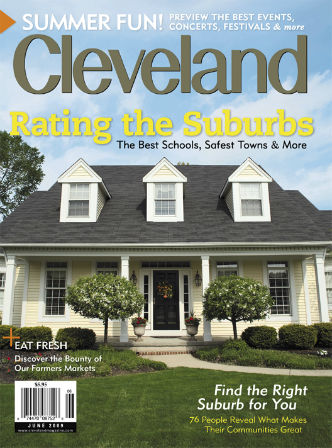 And Another Thing: Georgianna Garry

We check back in with Georgianna Garry after the birth of her son Daniel.

Buried alive in a graveyard

One morning in October 2006, Ross “Buddy” Barton III of Wooster was buried alive for almost three hours when an 8-foot ditch he was working in collapsed. The ditch flooded during the rescue attempt, and his heart stopped twice before he

A local radio host discovers full-time parenting is a lot harder than a day in the studio.

Ashes artfully merges musical genres with an entrancing sound that defies labels. (In fact, this Akron band has as tough a time classifying it as we do.)

JUNE 28 | Rock and Roll Hall of Fame and Museum

When we heard musicians were trying to reach new fans by trading the bar scene for the stay-at-home crowd, we had one question:
Where should we put the chairs?

Mikie Mayton, 41
tattoo artist and owner of A NU TATT2

Darrin “Nothing” Lewis, 19
guitarist and vocalist of Vintage Manifest

owner of the Learned Owl

state commissioner for the Ohio Commission on Hispanic/Latino Affairs

Marshall Sewell, “North of 60”
singer in the doo-wop group The Edsels

Lynda Rossiter, 55
city finance director and board member of the Greenwood Farms Association

R.A. Vernon, 37
Founder and senior pastor at “The Word” Church

Yvonne Mack hits it out of the park with her sophisticated yet affordable line of handbags.

A Mission to Teach

After 30 years in the steel mills, one man is hammering home the message that nursing is a great move for men, too.

The Fast Track to Success