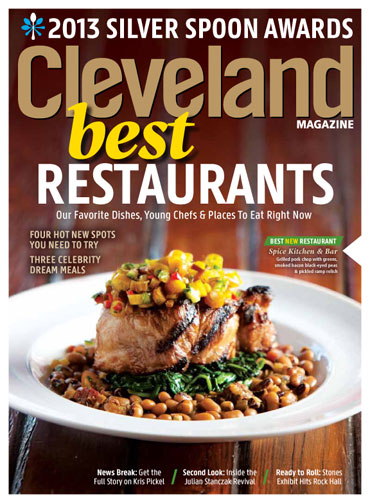 Keep your fork and knife ready for these new restaurants coming to a neighborhood near you.

Put these four new restaurants on your dining-out menu.

Culinary updates from around the city.

He escaped the Soviet gulag and created mesmerizing abstract paintings that fueled a starburst of fame in the 1960s. Now Julian Stanczak is enjoying renewed interest and acclaim.

This month brings two cultural festivals that offer a taste of the world without leaving town. Here's what to see, eat and experience.

One year ago, Channel 3 hired Kris Pickel to help reboot its nightly newscasts. The award-winning former reporter worked her way up to the anchor desk with a mix of positivity, relatability and toughness. She has a passion for telling people's stories and

When Edward P. Whelan died in March, he left a legacy of reporting that captures Cleveland in the '70s and '80s.

The Rock and Roll Hall of Fame and Museum celebrates 50 years of the Rolling Stones.

A new book by Nina Blackwood and the other original MTV VJs takes you behind the scenes of the network that changed a generation.

The Cleveland Print Room is reviving a lost art.

As Fashion Week Cleveland arrives this month, we check in with local designer Lotty Lewis.

Get a taste of what Cleveland's dining scene is serving with our annual look at Northeast Ohio's best restaurants. Sit down for a full-course meal of our favorite dishes, the trends we love and love to hate (sorry bacon), the chefs to keep your eye on and

We asked local chefs to decode some of their most puzzling menu jargon.

Best Restaurants 2013: In the Hot Seat

Get more face time with your favorite local chef (and some gourmet grub) by snagging a spot at one of these chef's tables.

We've asked a trio of local chefs to help us crack the case on these obscure menu items.

Prohibition is long gone, but a handful of distilleries are bringing back the mystique of that era with a fresh round of spirits. Bartenders are getting into the action too, mixing up cocktails featuring locally made liquors.