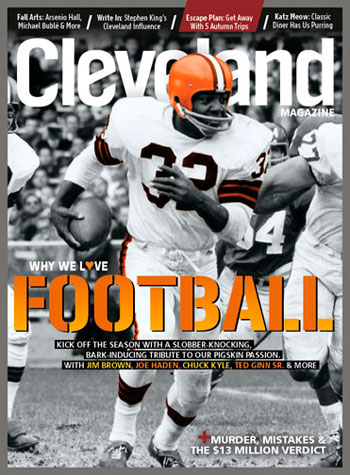 On Aug. 14, Great Lakes Brewing Co. unveiled a historically accurate re-creation of what is believed to be the oldest beer recipe ever recovered. Here is a look at the numbers behind the ancient Sumerian brew.

The once bustling East Bank of the Cuyahoga River is primed for a renaissance thanks to recent additions.

The champion of cooking fats, Michael Ruhlman, dishes on his newest cookbook dedicated to a timeless Jewish kitchen tradition.

Stephen King lifts the lid on CBS' Under the Dome, his sequel to The Shining and his Cleveland Influences.

They both celebrate the arts, but they couldn't be more different. Whether you enjoy American folk or world diversity, find it here.

As the new CEO of the City Club of Cleveland, Dan Moulthrop looks to bring fresh ideas to the century-old institution.

The Curious Case of David Ayers

The CMHA security guard was convicted of killing 76-year-old Dorothy Brown in her apartment. But after serving 11 years of a life sentence, Ayers was set free based on questions about the police investigation. Then, he put the cops on trial and won a $13 million verdict.

The federal probe into Jimmy Haslam's company reminds us how the Browns and the NFL have failed the fans.

Why We Love Football

Why We Love Football: Bark Place

The Dawg Pound is more than a section in the end zone. It's our football identity.

Why We Love Football: Barkevious Mingo

Why We Love Football: Blood Lines

We're home to some of the most intense rivalries at any level.

Why We Love Football: Brown and Orange All Over

You don't stop being a Browns fan simply by moving away from Northeast Ohio.
With more than 105,000 official members representing 67 different countries, Browns Backers Worldwide is one of the largest organized fan clubs in profess

Why We Love Football: Chuck Kyle

As St. Ignatius' head coach, Kyle has won more than 300 games and 11 state championships. This month, he will be inducted into the Greater Cleveland Sports Hall of Fame.

Why We Love Football: Family Business

Football can connect fathers and sons, teams and communities. Nowhere is that more true than Mount Union.

Why We Love Football: First and Goal

Why We Love Football: Game Changer

The innovations Paul Brown brought to football helped deliver championships and shape how it's played today.

Why We Love Football: Greg Pruitt

There was more to Greg Pruitt than tearaway jerseys. Pruitt's quickness, shifty moves and strength earned him five trips to the Pro Bowl and No. 4 all-time on the Browns career rushing list.

Why We Love Football: It Started Here

Two rivals helped fuel our love of the game.

Why We Love Football: It's Tradition

Jocelyn Smallwood grew up on the edge of the Ohio State University campus. Her parents were Buckeye graduates. Yet, the school wasn't among her initial college choices. But with a growing love for music and advice from a high school band teacher, she agre

Why We Love Football: Jim Brown

Jim Brown is the greatest running back of all time. (Some might insert "arguably," but not us.) He retired as the NFL record-holder for single-season (1,863) and career rushing yards (12,312), as well as the all-time leader in rushing touchdowns (106), to

Why We Love Football: Joe Haden

Entering his fourth pro year, former high school quarterback and fan-favorite Joe Haden looks to elevate his game to become one of the NFL's elite cornerbacks.

Why We Love Football: Keepers of History

Why We Love Football: Loss Cause

Few schools have the rollercoaster heritage of Oberlin College, from legendary coach John Heisman to two 40-game losing streaks. "I get to coach at a program that John Heisman started. That's a pretty rich legacy to follow," says current head coach Jeff R

Why We Love Football: Marshon Lattimore

Why We Love Football: Our Wandering Years

Without football for three seasons, we did the only thing left: We passed the time.

Why We Love Football: Ryan Shazier

Why We Love Football: Service Mettle

The 1946 Charity Game stands out for its crowd and as a return to normalcy after World War II.

Why We Love Football: Tailgating

No matter what happens on the field, Browns fans are guaranteed to have a good time on every given Sunday.

In 16 seasons at Glenville, the Tarblooders have made 11 playoff appearances and produced several pros. But to Ginn, who joins the Greater Cleveland Sports Hall of Fame this month, that's not what matters.

Why We Love Football: Win Power

From solving an eerie conundrum to reveling in an indoor snowstorm, get more out of museums with these fun, festive events.

The first Cleveland Museum of Art exhibit at the Transformer Station asks us to reimagine how we view the past.

After almost 20 years off the air, Cleveland native Arsenio Hall returns with a late-night show this month.

Canadian crooner Michael Bublé serenades us with talk of his new album and tour stop at Quicken Loans Arena.

With aggressive live shows and angsty songs, the Moxies are updating classic rock •n' roll for a new generation.

With a racy debut novel, Alissa Nutting may have penned this year's most controversial book.

Carve your own path through a historic village in southern Indiana.

Toronto's Parkdale is filled with spots for those who crave creative, locally sourced food.

Sip and savor your way through the scenic wine country of North East, Pa.