Scooters have been in the news a lot lately. Leave it to 2018 to force that line.

When Bird Rides, a scooter rental service that operates by randomly dropping clusters of e-scooters on the streets of unsuspecting cities without asking for permission, arrived in Cleveland in early August, the city quickly banished the company from its streets. Overnight, dockless scooters became a surrogate issue, representing the rift between the city’s stagnant leadership and residents’ desire for modernity. 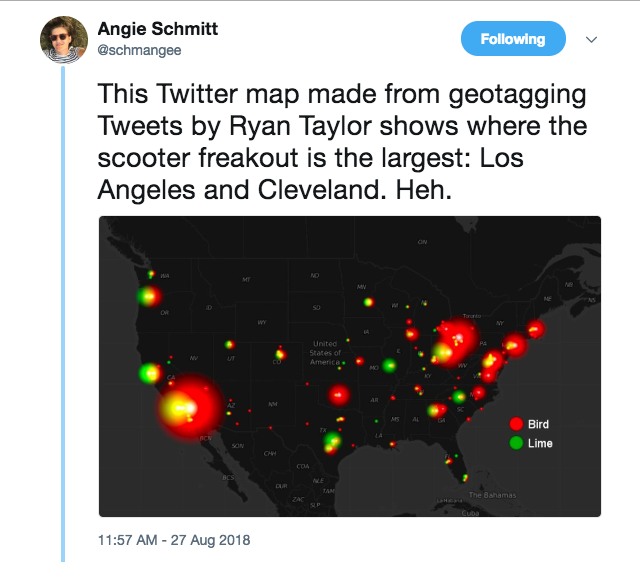 Team scooter seemed to be winning public support until Aug. 20, a week after Bird’s arrival, when a driver who had allegedly snorted heroin struck and killed a 21-year-old woman on an e-scooter. Bird quickly pulled its fleet and entered “good-faith negotiations” with the city of Cleveland to determine a two-wheeled path forward. Meanwhile, most of the conversation focused on the scooters rather than our obsession with cars, the city’s lack of bike infrastructure or the ever-growing heroin epidemic.

Cleveland is not the only city trying to determine how to handle scooters as not just a kid’s toy but a legitimate mode of transportation. On Monday, the operator of a Bird scooter in Cincinnati injured a pedestrian in a hit-skip collision, and other injuries have been documented in Indianapolis, San Diego and Tennessee.

But are the concerns surrounding e-scooters real or a bunch of feather dusting? In San Francisco, where a cease and desist halted scooter traffic, trauma specialists and medical researchers convened for a scooter safety conference in June to determine how to confront and document the rash of scooter injuries.

So, while the electronic scooters don’t fit the definition of a motorcycle, moped, bike, skateboard or motor vehicle, here are some statistics behind other potentially fatal things we encounter every day.

Underlying Causes of Death in 2016 (Source: Center for Disease Control and Prevention):


And to think the city had the audacity to allow an ice rink in the middle of Public Square when skating is so dangerous.
Share this story:

1977: A Summer Day at Mentor Headlands

Ohio's largest beach has been a favorite of Clevelanders for generations.

We rank our favorites quarantine followers from Stefani Schaefer to Joe Thomas.

Samaria Rice Speaks Out About Justice, Protesting And The Search For Peace

Samaria Rice, whose son Tamir was fatally shot by a former Cleveland police officer in 2014, discusses how this tide of protests in Cleveland look different.