Zoom meetings, curbside pickups and bandana face masks represent a handful of the new normal realities that grew out of the COVID-19 pandemic. With a virtually overnight shutdown of the economy, life felt uncertain for most of us.

Or maybe “fearful” is a better word for those who watched a record bull stock market plummet by 33.8% on March 23.

Unprecedented. Uncertain. This is how these times feel, in spite of silver linings like discovering the conveniences of online retail and spending more time with family.

Planning for their financial futures while everything about work and life has changed drastically is causing people to wonder: How do you manage wealth in this new world?

That’s because when strong emotions such as fear and loss guide investment decisions, there is a good chance you’ll hurt the portfolio by selling low instead of seeing an opportunity to buy.

“The amount of wealth that can be destroyed during a crisis is unbelievable,” Stephens says. “The key is to establish a well-diversified investment plan and be disciplined.”

With a plan, you’ll have more confidence when the market is volatile.

“No one should say ‘should’ve, would’ve, could’ve’ when the market goes down,” says Anna Rathbun, chief investment officer at CBIZ Investment Advisory Services. “The prudent practice is to have a plan in place — an investment policy that is based on your personal circumstances.”

She emphasizes that building a diversified portfolio will help you feel confident when market gyrations occur, and she warns not to abandon the market altogether.

Market ups and downs — even steep ones — are actually the norm.

Take the 1987 market crash, the tech bubble bursting in 1999, the stock market aftermath following 9/11 and the housing and credit crisis of 2008.

“I want to widen the definition of ‘uncertainty’ and say the market is uncertain all of the time,” Rathbun says. “Even when markets are going up, it doesn’t mean we have more certainty. It means the sentiment is good.”

What makes the recent recession so unusual is that it was triggered by a self-imposed shutdown. We moved to a work-at-home economy overnight.

Not to mention, the country had not experienced a pandemic of this scope since the Spanish flu of 1918. Plus, the magnitude of the markets’ climb and fall was dramatic.

This dramatic recovery also drives uncertainty. Will it last?

“From history, we know that the markets tend to go up,” Rathbun says. “We do expect a recovery, the question is how quickly.”

Just as varied are the stocks that performed well versus the ones that suffered from March through late May this year.

“It was definitely a tale of two cities,” says Gerald Jarzabek, director at Baird Financial.

Technology stocks such as Zoom, Apple and Microsoft were booming.

“Most of us had never even heard of Zoom a few months ago and now it’s one of the biggest names out there,” he relates. “Anything that enabled you to live without leaving your house did really well.”

On the other hand, airlines saw a 90% reduction in traffic, Stephens points out. Cruise lines were completely shut down, and hotels and restaurants experienced massive declines ranging from 50-100% losses.

“Many of those companies are starting to now recover,” Stephens says.

Necessary goods such as consumer staples and household items and services held up well. But discretionary spending, on retailers and restaurants for example, performed poorly.

“This is pretty typical during recessionary environments,” Stephens says. “We all still brush our teeth, wash our hair and take medications during a recession.”

What was not typical was the Federal Reserve’s response and its impact on the corporate bonds market — a notable difference in this recession, Rathbun says.

“They flooded the markets with stimulus and intervened in the corporate credit markets by backing high-yields debt,” she says.

Debt issuance passed $1 trillion at the end of May, while in 2019 debt did not hit this level until November. The problem with debt is it does not go away. As Stephens notes, the total stimulus of about $9 trillion represents nearly 40% of the country’s gross domestic product.

It all means once the dust settles, inflation could go up, meaning more conservative investments, such as bonds, could take a hit.

“Say inflation spikes to 5%, which we haven’t seen in three decades,” Stephens says. “Today, you are getting a 0.7% return on treasury bonds. So, you could potentially lose 4% on your money in real terms each year.”

Stephens notes that investments such as bonds could take a beating if inflation increases by 5%.

“Conservative investors should consider including equities in their portfolio in order to maintain buying power if that happens,” he says.

If there’s a spike in COVID-19 cases in late summer or fall, the market very well could end up as the W rather than the V that is seemingly occurring, inciting another wave of people selling low when, and if, a drop happens.

What we can trust is market history.

“There is going to be volatility and you are going to have periods like this,” Jarzabek says. “The key is to not overreact to the market. Normally, the worst thing you can do is make drastic changes to your portfolio and let your emotions get the better of you.” 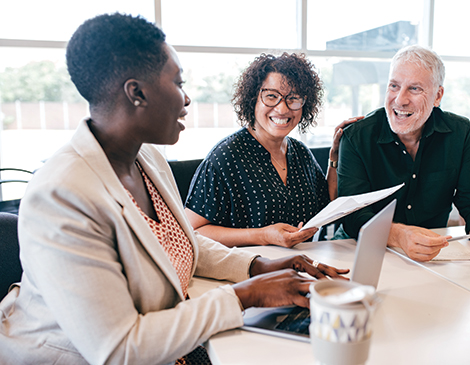 Self-awareness is an important part of building a financial plan that aligns with your risk tolerance and wealth goals.

A financial advisor can help remove biases from investment and savings decisions. Two common ones are recency bias and confirmation bias.

“Recency is huge,” Stephens says. “People forget what happened in 2008 and make decisions based on what happened yesterday, versus what has happened throughout history.”

Confirmation bias is gravitating toward evidence that confirms existing beliefs, such as reading articles written by investors who are bearish about the markets if you already think the market is hot.

“It’s OK to have biases, but you shouldn’t act on them,” Rathbun says.

A good financial advisor will help identify these biases while assessing your risk profile and stage in life to build a financial plan that can withstand volatile markets.

Jarzabek recommends a “bucket approach” to investing and saving for the future. A conservative bucket should include money markets, certificates of deposit and cash that can cover your cost of living for six to 24 months. “That is money you are actively withdrawing from, and you don’t want to take any risk with that,” Jarzabek says.

The second bucket includes intermediate investments such as short- and long-term bonds, including corporate municipal bonds.

“You still want to diversify within your bond portfolio,” Jarzabek says.

The third bucket is for the long-term and can be more volatile. It should include a diversity of stocks, including blue chips, international and small-capital investments.

“The idea is, if you have enough money in the first and second buckets, you should be able to ride out markets like this without having to tap into your third bucket,” Jarzabek says.


Thrive After The Pandemic

Buy low and sell high. We’ve heard it before, but there are market opportunities that exist in the wake of the pandemic.

Stephens recommends revisiting your investment and retirement goals, and your current risk profile.

“Your perception of risk might have changed,” he points out. “This being said, deploy your assets into a well-diversified portfolio, which includes financially sound, high-quality companies that historically withstand market turbulence and systemic risk but thrive during a business landscape that could change.”

“Some individuals may want to sell some fixed income and buy some equities,” Stephens advises. “Deploy cash sitting on the sidelines since interest rates are back to zero. These proactive decisions can help your portfolio compound faster as the economy recovers.”

For those who are risk-averse and living off of their portfolios, you should consider adding equities and consumer staple stocks.

“Go for high-quality stocks because there is a risk of inflation with the stimulus,” he says.

Jarzabek reiterates the importance of reviewing asset allocation, or where you are putting your investment dollars.

“If you like the investments you had before the pandemic and those are down, now is a great time to buy some more potentially,” he says. “If you originally targeted 10% growth and it performed so much better that it’s at 15%, maybe take out that 5% and use it to invest in other pieces of your portfolio.”

And if you’re ever unsure if something is the right move, a financial advisor can help you think through scenarios, define goals and consider things you might not have. They’ll also be able to help temper the emotion that volatile markets trigger.

“The strongest human emotions are fear and loss and as an advisor, I put that aside,” Stephens says.

And whatever you do post-pandemic, focus on the plan. Appealing tech stocks might tempt you to invest, while dragging retail stocks might cause you to sell. But wait, talk to an advisor and review your plan.

“I don’t recommend making huge changes, unless you have a plan in place that is telling you those are the right moves to be making,” Jarzabek says.