It’s been one long, tragic year since COVID-19 surfaced, claiming the lives of more than 400,000 individuals in the U.S. and shuttering thousands of businesses and restaurants in its path. Our social culture and day-to-day activities have been changed for the immediate future. While many of us are still waiting to receive the COVID-19 vaccine, others are sick and dying. As we find ways to persevere and remember all those we’ve lost along the way, three Clevelanders share how the virus impacted their lives.

Dr. Bo Carnicorn
As a clinical pharmacist at University Hospitals, Dr. Bo Carnicom felt a sense of duty to get the Pfizer vaccine.

“I knew I’d feel more confident recommending a vaccine that I’d already been exposed to,” he says. “I felt it would put my friends, family and patients more at ease if I could say ‘Hey, I was one of the first handful of people to test this out and I came out of it fine. No microchips or live viruses were being injected into my arm!’ ”

Before the vaccine was made public in December, Carnicom was one of tens of thousands who participated in one of several Pfizer vaccine trials provided by Velocity Clinical Research. For seven months, he posted results of how he was feeling during the clinical trial and in response to the vaccine after major appointments on Facebook and Instagram.

“I didn’t want to sugarcoat my experiences. People want the truth,” Carnicom says. “So I made sure to let everyone know in my social media posts that, yeah, you’re likely to have a sore arm for a few days after, and yeah, there’s a chance that you may have some reactions to it but that’s entirely normal and is just your immune system doing its thing to elicit a strong response to any future exposure to the virus.”

With so much misinformation, Carnicom wanted people to look at the information he was putting out there and couple it with the fact that as a medical professional and someone who has experienced the vaccine firsthand, he was someone who could be trusted.

“I don’t see life returning to normal until a very large percentage of the population has taken one of the available vaccines,” Carnicom says. “It gives me hope though to see so many people I know are eager to get this vaccine. Hopefully that means life can start to be a bit more normal soon.” 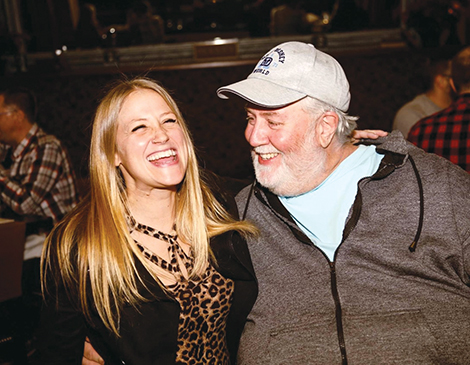 The comedian and co-host of The Alan Cox Show has made a career out of her dark, sarcastic humor and sly tongue. But lately she’s been dealing with a new set of emotions, brought on by the recent death of her father, Tony Santora, who died Jan. 14 from COVID-19 complications.

“There are parts of the day when I am laughing about memories and can go about my business for a few hours and then I’ll have the urge to call him and just completely break down knowing that I can never do that again,” says Santora.

“He was always ready with a joke or sarcastic comment,” Santora says. “He could get anyone to smile and was often a fan of inappropriate, dark humor. He shaped my sense of humor and much of my personality.”

She has embraced a kind of vulnerability that includes sharing her path to sobriety. In the wake of her father’s COVID-19 diagnosis, Santora took to her Instagram,
@marysantoracomedy, to share updates on how the illness developed prior to his death.

“I’ve learned that it’s amazing what being open and real with people can do, not only for you, but for them as well,” Santora says. It is this same philosophy she tries to illustrate and implement as she continues to grieve.

“This was not a loss people experienced a year ago, so there aren’t books on it, there isn’t really a how-to guide or one way to do it,” Santora says. “Reach out to someone who you know has experienced this and if they are willing, just vent to one another. Sometimes the ear of someone who gets it can ease the burden.” 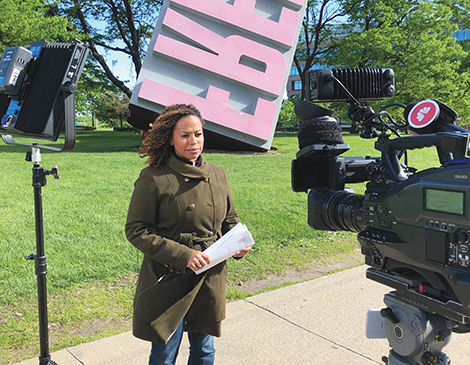 Romney Smith was adjusting to her new life in Cleveland before the pandemic. She got a job as a 3News anchor and moved to Cleveland from Georgia in the fall of 2019 with plans to explore the city with her soon-to-be-husband, Jason.

“I was excited to learn about Cleveland, the hot topics, eat at all the local spots, dive into the issues and really immerse myself in my view of the city like the residents,” Smith says.

The couple got married in Puerto Rico last February. During their honeymoon, they began to hear rumors about a virus spreading around the world. They flew back to Ohio and in just a few weeks, Cuyahoga County’s first COVID-19 case was confirmed and the city went into lockdown. As a reporter in a new city, it has been hard for Smith to gain a sense of community. Although she never had to work completely remote, it was important to get out the message about COVID-19.

“It was important to me that viewers were getting the proper context to make sure that we weren’t blowing it out of proportion, but also conveying the mysteriousness of the situation,” says Smith.

In January, her colleagues at 3News celebrated her birthday on-air with a surprise video taken of her three brothers alongside her mother and stepfather, Kim and Jerry Gibson. It was a big moment for Romney because it meant her brothers had to test negative for COVID-19 before visiting her stepfather who’s immunocompromised from two types of cancer.

“Ohio is really big on family values, so it made me feel very special,” says Smith. “To get that kind of support from the community, with my colleagues by my side, it meant a lot.”

The broadcaster will remain a champion of the team outside of the booth.