It was February 2017, amid President Trump and his administration’s travel ban, a series of executive orders placing restrictions on targeted nations, when Jing Lauengco and her mother boarded a 22-hour flight from Cleveland to the Philippines. After just a few days in Manila, befogged from their arrival, her mother told her to “be ready” as they embarked on a road trip to the city of Vigan.

“Groggy. Hot. Jet-lagged. Disoriented. I had no idea what was waiting for me at 3:00AM,” she opens in a recent blog post on her website Other Brown Girl (OBG). “I was intrigued and frankly had no idea how long the trek would be. And no idea how life-altering it would be, either.”

That 10-day trip and visit to her mother’s childhood home transformed how Lauengco saw her world.

“The stories of [my parents and grandparents’] sacrifice. The stories and links to my heritage,” she says tearfully, over the phone. “It led me to my calling.”

The brand strategist and business consultant designed OBG, an ecosystem and brand platform to celebrate female empowerment, diversity and creative expression. She sought to pose an important question: What is it like to be a multicultural, modern woman in the new millennium? In the blog, she answers that question by uncovering stories that touch on the beauty of identity, immigration and finding bravery in shared history.

Lauengco was fascinated by language and storytelling at a young age. Growing up bilingual, she was charmed by homonyms that transcend individual languages, such as onions, which is pronounced as cebollas in Spanish and sibuyas in Tagalog.

“Storytelling for me has always been this toggle, split screen mode,” she says. “I would hear one story in Filipino and another story in English. I always knew there were two sides to every story as it relates to language.”

Born in Manila, her family moved to Toledo when she was around 18 months old. As she began to come of age, she was innately curious for a connection to her cultural heritage. Lauengco recalls yearning to hear stories from her mother’s childhood and lamenting the inability to communicate with her grandparents, who lived across the world. Decades later, when her father died and she realized her mom was getting older, the family understood the importance of traveling back home. 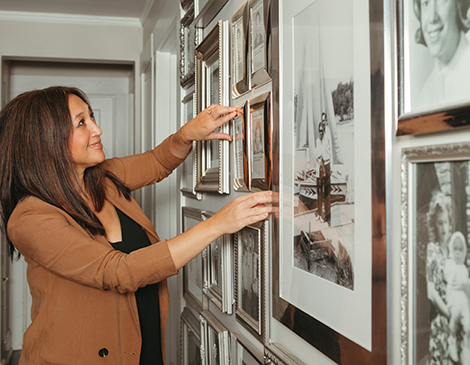 “It was this blank gap I didn’t know how to process and talk about when I was younger,” she says. “My parents, they weren’t talkers. So the trip was my last chance to ask questions. I didn’t want to lose those stories that tied me to my ancestors.”

The trip and conversations afterward led her to think about her international friends and other women, their family stories and journeys. For people who are often “othered,” Lauengco wanted to illustrate how their families move through the world. Through OBG, she began to explore the ways visual storytelling can tell those families’ stories, and spark more thoughtful discussion around diversity today.

“I was very interested in ‘Brown’ as an umbrella term,” she says. “[The words] ‘Brown,’ ‘other,’ and ‘girl,’ and how these things are interesting to me around brand culture, female identity. ‘Other’ is a strong theme in my life, and I’m always curious how people are shaped by their experience. I kind of wanted to make poetry out of it.”

While recovering from breast cancer, she began sketching the site as a creative project for herself to uncover the untold stories from her family and heritage. It also became a means to document the humbling experience she had on the trip for her son.

“I didn’t know how this particular chapter with cancer was going to end, so I wanted to get some stories out there,” she says. “I was writing the next chapter, word by word, day by day, thought by thought.”

In one post, she curates the photos she captured of the sunsets, white water buffaloes pulling carts, the lush rice fields, the jeepneys whipping past her on the rustic streets. The blog, which operates as a multiplatform digital experiment, is a direct way for her son and younger audiences to grapple with their identity as multigenerational children.

“It puts a relatable spin to his generation in sharing and creating what is old, new and becoming,” she says. “Because stories are always moving and he’s a part of the story as well.”

For Lauengco, the project is much more than sharing her story. It is a way to map memory, history and cultural heritage from her family and other women.

“I want to go out like a comet,” she says. “We are all our own light and I don’t want that to be diminished in any way. In the end stories are what we leave behind and I want to curate positive conversation around what it means to be a modern-day Brown girl living in the world.”

Callas reinvented his life in the Northeast Ohio culinary industry after getting sober. By Anthony Elder