The American dream is supposed to be coveted by all of us, yet in our increasingly individualized society it’s become almost a taboo ideal that many shy away from. In fact, the topic is so off-limits that a handful of local groups declined to host a panel on the American Dream: A Symposium at the Intersection of Art and Politics. The City Club of Cleveland discussion found a home at the Transformer Station July 19. Sixteen internationally acclaimed and local artists combined to offer their take on the topic as a literal manifestation of the ideal — an American Dream Project ice sculpture by Brooklyn artists LigoranoReese physically melted away outside the panel hall and crashed down as the crowd was released. Meanwhile, a team of artists including Will Sylvester hosted the Truth Booth, an inflatable speech bubble that has traveled to several countries and is set to travel to all 50 states to record what participants’ personal truth is. Here are three ways that art can help us express our political views and shape a new version of the American dream. 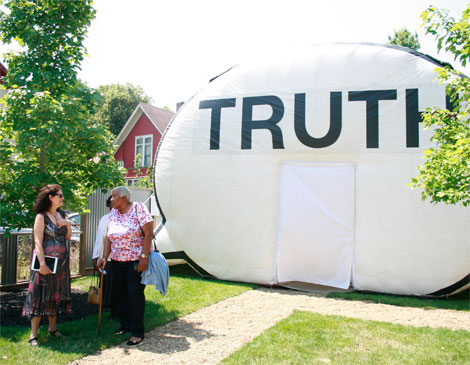 Access: A panel of arts leaders talked about using art to widen the access to under-reached communities and give those people a voice. Pulitzer Prize-winning journalist Connie Schultz discussed how her Facebook has been an open-discussion forum for those not represented elsewhere. “I get private messages from people. I get women – many of them younger, lots of people color saying that, ‘I’d never express my opinions in public like I do now,’ and that means everything to me,” she says of her page. “I want to make it available to as many people as possible. I want to hear from people who are normally ignored.” 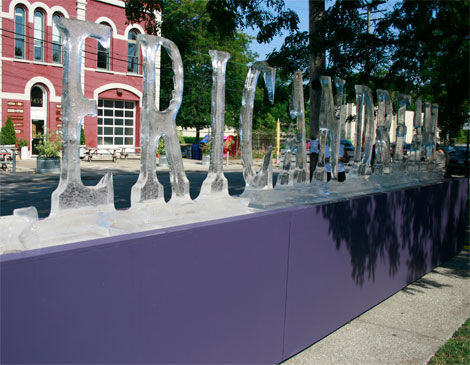 Perception: Marshall Reese, who partnered with Nora Ligorano to make the melting sculpture that turned into mere ice blocks at the end of the panel, challenged crowd members to watch the sculpture shrink and rethink their opinions of the American dream is. “It’s time to reconsider what it means,” he says. “What I’ve seen in my adult life is a complete turnaround of the values as a young man I wanted to see the country move in. We want it to go forward. We don’t want it to go backward. I think art can do that.”

Protest: Art is a way to speak out during the turbulent times our country is facing, even if the statement is met with opposition. Spencer Tunick, the photographer behindEverything She Says Means Everything, a series of photographs of 100 nude women posing with mirrors reflecting upon the Huntington Convention Center of Cleveland that was completed earlier this week, spoke on art as an action. “I know the work I made was a success because half of America hates me now,” says Tunick, who admits he got so much hate on Facebook and Instagram that he asked them to shut down the comments sections. “All of these women sent a message to the Republican Party that they are tired of the oppressive rhetoric against minorities and women. Visually, I tried to reflect with mirrors, the wisdom of 100 women onto the convention center to sort of disorient the convention center and jinx the convention. … I think it really is working,” he adds with a laugh.