Sport talk radio is so boomer. Instead, call an audible and tune in for insight, laughs and more from three of our favorite Cleveland sports podcasts. 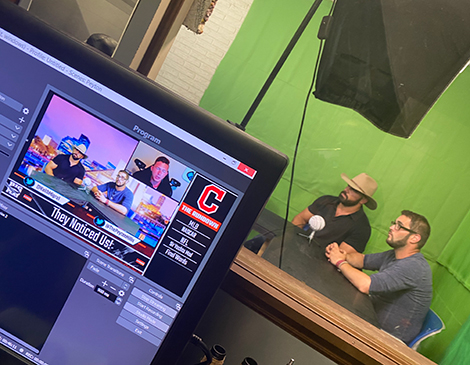 The Podcast: In The Backfield
The Vibe: Listening in on co-host Keith Migra’s conversations with former Browns running back Peyton Hillis, who headlines the show, you’d never know they’ve only been doing the podcast for three months. There’s a brotherly connection between the two, as Hillis provides sports insights from the point of view of someone who took the field, and Migra offers a fan’s perspective. “[We’re] trying to get the players’ perspectives to kind of make the fans understand what exactly the players actually go through,” Hillis says. Memorable Episode: While most of the 12 episodes over the last few months have been recorded with Migra in Northeast Ohio and Hillis in his native Arkansas, they’ve taken turns visiting each other and recording together. But Migra’s first trip to Arkansas to record the July 25 episode is one to remember, because it’s the first time their dynamic really shined. “I look at Keith like a brother now, a family member,” Hillis says. “I’m sure he feels the same way — in such a short time.” Browns Hopes for 2020: “They have the most talented team they’ve had in 15-20 years,” Hillis says. “If the coaching staff and the players have a good relationship, there’s no doubt to me that they at least when the AFC North.” 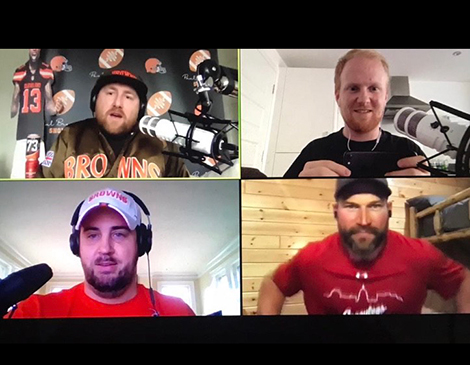 The Podcast: The Paul Brown Podcast — The First International Cleveland Browns Podcast
The Vibe: After getting into American football six years ago, Londoner Paul Brown figured he’d throw his support behind one of two teams associated with coaching legend Paul Brown, choosing the Browns over the Cincinnati Bengals. Along with podcast mates, fellow Brit Jack Duffin and Clevelander Iain Wright, his podcast brings a dose of classic dry British humor and deep dives into all things Dawg Pound. “We try not to be that annoying foreigner that tries to tell everyone about American football,” Brown says. Memorable Episode: After more than 500 episodes, it’s hard to pick a favorite, but they’ve had quite the guest list, including Eric Metcalf, Earnest Byner and Joe Thomas on episode No. 499 in April. “People say, ‘Oh, you’re lucky to have Joe Thomas on the show,’” Brown says. “But the flip is, I’ve met Joe Thomas five times. I have a good relationship with him online. It’s taken four or five years to get it to that level.” Browns Hopes for 2020: “At the moment, the [Baltimore] Ravens are coming in as the favorites of the group, and high ranking for Super Bowl,” Brown says. “I think 8-8 is realistic [for the Browns], and I think playoffs would be amazing.” 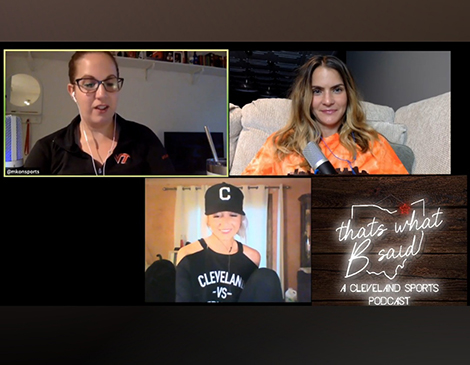 The Podcast: That’s What B Said
The Vibe: This podcast’s Friends-inspired episode titles “The One Where We’re Not Panicked Yet” and “The One Where We Didn’t Go 1-0” set the tone for the hilarious sports takes from co-hosts Brittany Mollis and Brianna Rust, and producer Meredith Kain. “It’s just a bunch of girlfriends sitting there talking about sports,” says Mollis. “We would be doing this anyway, even if we weren’t recording it. We would sit there is all about sports. That's what we do.” Memorable Episode: Throughout the 2019 Browns season, most episodes featured a “What was Freddie Kitchens thinking?” segment, delving into dumb decisions by the first-time, one-and-done head coach. So when he was fired in late December, the crew fired up an emergency pod. “Honestly, that the most was fun we’ve had,” Mollis says, laughing. “Not to be mean, but Freddie Kitchens became like a theme on our podcast.” Browns Hopes for 2020: “Best case scenario they go 9-7,” says Mollis. “I probably cheer the hardest for [linebacker] Mack Wilson. I feel like he has a lot to prove this season, but he just seems to love being here so much, and I love that energy that he brings.”