Instead, they found a sport that would change the trajectory of their lives. Pickleball, they discovered, is an amalgamation of tennis, ping-pong and badminton featuring paddles and a perforated whiffle ball. For two weeks, the duo spent nearly every waking hour swatting balls under the Florida sun.

Returning to Cleveland, the duo researched Northeast Ohio's pickleball scene in the hopes of making the sport more accessible locally. That research led Jurek to create Cleveland Pickleball, a website dedicated to helping aspiring players find courts, instructors and tournaments. Now, a few years later, Cleveland Pickleball boasts an annual tournament that garnered 100 players in 2022, a monthly newsletter with 500 subscribers and a rapidly growing player base.

Invented in 1965 by three middle-aged fathers, pickleball is America’s fastest-growing sport, according to the Sports and Fitness Industry Association, with an estimated 4.8 million players at the start of 2022. That growth took a huge spike in October when Akron kid LeBron James announced his investment in a Major League Pickleball team, a move that MLP founder Steve Kuhn called a “watershed moment.” A  month later, Anheuser-Busch announced it had purchased a MLP team, becoming the first Fortune 500 company to buy a professional pickleball team.

“I haven’t seen a sport grow this fast in my lifetime,” Jurek says. “This is a once-in-a-lifetime moment, which is why we’re so excited.” 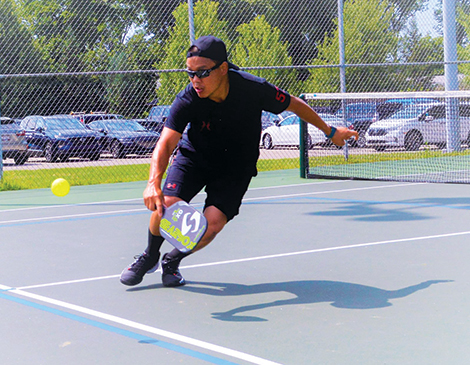 While pickleball is still a favorite of snowbirds, it's gaining momentum among 20- and 30-somethings across the nation.

“A lot of our friends were laughing in the beginning because pickleball is seen as a retiree sport when it really isn’t,” Hutchinson says. “Cleveland’s always been great about having intramural sports for younger people, and it’s cool to see pickleball become one of those things.”

When David Barr purchased the Wembley Club in 2014, he was one of those naysayers. But, after a steady uptick in interest, he installed the club’s first pickleball courts in 2018.

Then, during the 2020 COVID-19 lockdowns, Barr renovated the fitness center with pickleball in mind. Now, the Chagrin Falls-based club boasts more than 300 pickleball players, with two separate nights of open play on the club’s eight pickleball courts.

But these days, there are plenty of places to play, such as Bleser Park in Avon Lake (the court where Jurek hosts his tournament), the Broadview Heights Recreation Center and North Ridge Racket and Paddle in North Ridgeville.

“It’s a really fun way to exercise with others,” Barr says. “It really helps build camaraderie among the players.”

Court etiquette will be familiar to anyone who’s ever hooped at their college's recreation center. During open hours, it’s
first-come, first-served. Barr says that an easygoing attitude along with the sport’s easy-to-learn, hard-to-master gameplay has pushed the sport to new heights.

“Pickleball is easy to learn,” Barr says. “I think people feel like they can just pick up a paddle and start playing.”

Wembley Club is now home to some of Cleveland’s best picklers, such as club teacher André Mick and instructor Katie Allan. (Both are in the top 100 for their gender in the world.)

“I hope that we’re in stadiums someday,” Barr says. “Cleveland doesn’t have professional pickleball representation yet, but I could see that as something that would happen in the long term.”

Until then, Barr, Jurek, Hutchinson and other members of the pickleball community are doing their part to help build the game in courts and gyms across Northeast Ohio.

“If there’s one thing we’ve learned in recent years, it’s that it’s really important to be healthy,” Barr says. “This is a new avenue where people can come out, play and get exercise while having fun.”