From a young age, Sarah Krisher was fascinated with the creation of things — especially while studying leaves in the woods with her father. “He went into depth about how they were created, pointed out all of their markings, described their inherent design,” she says. So it wasn’t a surprise when Krisher enrolled at the Cleveland Institute of Art to study enameling and jewelry making. Today, the 39-year-old handcrafts necklaces, rings and bracelets from materials such as stone, silver, gold, copper and more. “I love the feeling of turning nothing into something,” she says.

Farm Life: Growing up on a more than 1,000-acre dairy farm in Lordstown, Ohio, Krisher had the ultimate creative playground. Sometimes, she would sneak into her dad’s workshop with her brother and use wood to build docks, forts and more. “We would even build what we called ‘hospitals’ for the kittens,” she says. “So when the vet came to give them their medicine, they had a place to go.”

Behind the Scenes: Most kids grew up loving Mister Rogers’ Neighborhood, but not Krisher. There was only one part of the show that piqued her interest. “He would go into a company and show the process of them making something,” she says. “That got me more excited than any other thing that was on TV.”

Beautiful Mess: With hundreds of tools such as flex shafts, torches and hammers and just as many stones, Krisher’s studio can get a bit messy. “Some people are shocked when they see how chaotic my design process is,” she says, “but having everything out allows me to pick and pull from whatever is inspiring to me.”

Home Plate: Krisher does her own gold plating — adding a layer of gold on top of another metal. “When I got the materials to learn how to plate, I cried,” she says. “The book was so thick and the video was so intense. But now I have such a huge variety of options.” 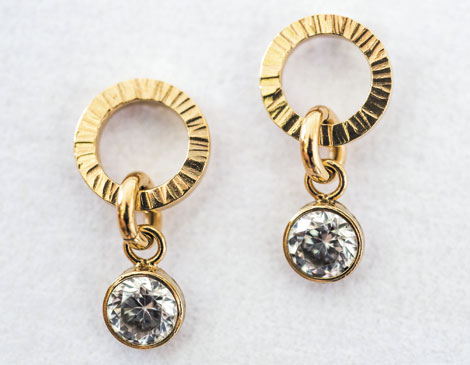 Made with 24-karat gold plated over sterling silver, these gold circle earrings ($75) sparkle just enough to be fancy — but the small, simple shape allows them to be an everyday go-to.