With great power comes a great responsibility for equal representation.

As the Marvel Cinematic Universe gears up to feature its first on-screen LGBTQ superhero in the upcoming Thor: Love and Thunder — Valkyrie, the queen-seeking leader of the Asgardians played by pansexual actress Tessa Thompson — Cleveland, and Midwest convention culture in general, is far overdue for its own queer-centered convention. 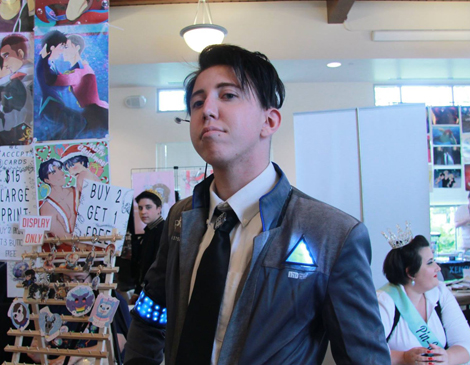 “The most readily accessible convention culture is very much rooted in straight culture,” Orcutt says. “Queer culture is so vast and has such a rich history — artists, podcasts, books, paintings and folklore. I just didn’t see enough celebration of that.”

So last year, Orcutt created the inaugural Flaming River Con with a board comprised of nearly all transgender individuals, and prioritized people of color on panels and in their vendor list. More than 500 people showed up for the free all-day convention dedicated to raising LGBTQ voices in geek culture.

This year’s event Sept. 21 is stacked for even more inclusion as a move to the Louis Stokes Wing of the Cleveland Public Library doubles its capacity.

It also adds a larger gaming room, drag king and queen storytime, and more panels that focus on a wider range of topics, including Afrofuturism, comics and mental illness, and using self-promotion as a super power.

“People invite us to the table and we get there, and it ends up being a kiddie table to the side,” says Orcutt. “So, I just built my own damn table.”
Share this story:

Cleveland Museum of Art brings MIX to your home, Flight Cleveland teaches Greek winemaking, laugh it up at the Winchester Music Tavern and more this weekend in Cleveland.

Cruise the Zoo, learn to sew or sit back and enjoy a breezy Rock Hall performance - all from the comfort of home or a safe distance - with our weekly roundup of things to do.